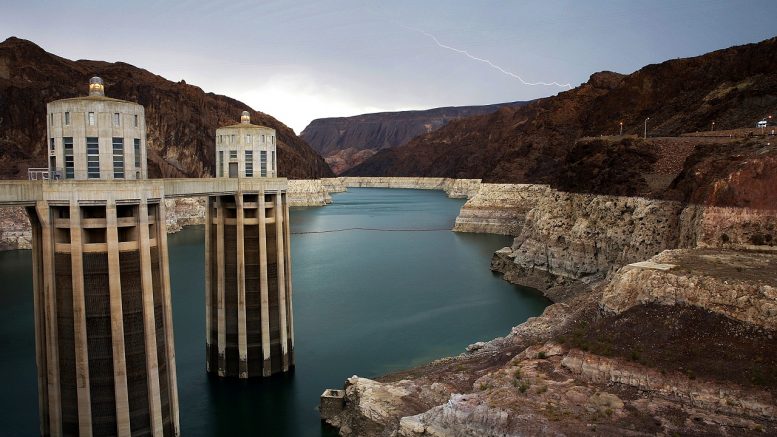 Lake Mead, the United States’ largest reservoir, is draining rapidly. Due to an extreme climate change-fueled drought and an increase in demand for water, Lake Mead registered its lowest level on record since the reservoir was first filled in the 1930s.

The drought that caused Lake Mead and other important water sources like Lake Powell to drain at alarming rates have caused many other issues throughout the country. Heat waves killed hundreds of people, wildfires took out towns, and grasshoppers are causing cattle to die off as they eat all of the foliage.

Scientists say that the West’s historic, multi-year drought is a “clear sign” of how the climate crisis is affecting not just our weather, but also communities’ food production, electricity generation, livelihoods, and, most notably, water supply.

Among this drought, there is another significant climate crisis that Lake Mead is on its way to become the focal point of: water shortages in the West. Millions of people every year are being affected and will continue to be affected in the coming years by the Colorado River shortage alone, according to researchers. Some are even being forced to make painful water cuts.

“Even without climate change, we would have a problem because we’re taking more water out than the river could provide,” John Fleck, director of the Water Resources Program at the University of New Mexico, told CNN in an interview. “But climate change has made the problem much worse by substantially reducing the flow in the river.”

Lake Mead is Around 143 Feet Below “Full”

As of last year, the water in Lake Mead reached an all time low of 1070.6 feet above sea level since it was originally filled, according to data provided by the US Bureau of Reclamation. The lake has fallen around 143 feet below its 2000 level, when it was last considered full.

This left a “bathtub ring,” a ring of white minerals as tall as the Statue of Liberty, all along the lake’s shoreline. 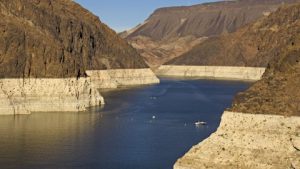 As the water level goes down in Lake Mead, a “bathtub ring” of minerals is left on the shore, visibly showing the decline. | Credit: CNN

Experts say it may never be full again.

Currently, at the lowest level Lake Mead has ever been at, the reservoir is only at 36 percent capacity, a number that continues to fall as the decline continues to outpace projections from just months previous.

“This [rapid decline] scares me,” Fleck admitted. “It’s dropping so fast that it may be overreaching our ability to cope with the problems. I did not anticipate the bottom to drop this quickly, and we’re only talking about Lake Mead.”

The hardest hit from water cuts will be agricultural communities, especially those in central Arizona. Because they will have less water, farmers say they will be forced to fallow land.

“A number of tribal communities across the Colorado River Basin have been promised some water that they don’t have yet.” 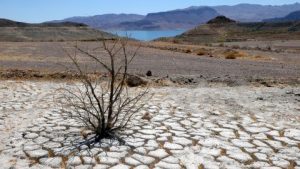 This section of dry, cracked earth was once underwater near where the marine was once located in the Lake Mead National Recreation Area. | Credit: CNN, Ethan Miller

Now that a shortage has been declared, the Bureau of Reclamation has established the following cutbacks:

Because of the scale that water is being measured at, gallons are not used. Acre-feet is the amount of water it takes to cover one acre of land at one foot deep. That’s about 325,853 gallons, also the amount of water the average family uses in one year.

Though these shortages are planned to happen sometime this year, they won’t hit the average person for some time. Experts actually think that Tier 3 shortages, which will impact municipal water supplies, will be implemented as soon as 2024, unless the drought, or the climate crisis, improves.

If The Lake Loses Any More water, the Hoover Dam is in Danger

As Lake Mead loses water, Hoover Dam, and all of the people that rely on the dam, are in danger.

The reservoir has lost 5.5. trillion gallons of water since 2000, which is equivalent to more than 1,000 Olympic-sized swimming pools lost every day for over 22 years.

The lake also loses around 6 feet of water to evaporation each year. As temperatures warm, the snowmelt that supplies the river continues to decrease as more water evaporates, especially during extreme heat waves like the West has been experiencing over the past few years.

While six feet of water may not sound like a lot of water, that is an average loss of 300 billion gallons per year on top of the water taken for human use and power generation.

As the reservoir loses all this water every year, the Hoover Dam loses less water flowing through it.

Generally, the Hoover Dam produces about 2,00 megawatts of hydropower, enough electricity for nearly 8 million Americans. As less water flows through the dam, however, its capacity has been closer to 1,500 megawatts, a drop of almost 25 percent.

This decline affects many states, including California, Arizona, and Nevada, all of which get their energy from the Hoover Dam.

In fact, if Lake Mead were to lose only 175 feet of water, no more water would flow through the Hoover Dam, cutting it off for everyone downstream.

Experts say the “dead pool” level is at 895 feet, a level that we are rapidly approaching.

“What we need to do is recognize the science behind this reality, and that this does not get better,” Fleck urged. “We’re all going to have to deal with less and collaborate on a new set of numbers that reflects the reality of the science today.”

Be the first to comment on "The Drought Affecting Lake Mead"