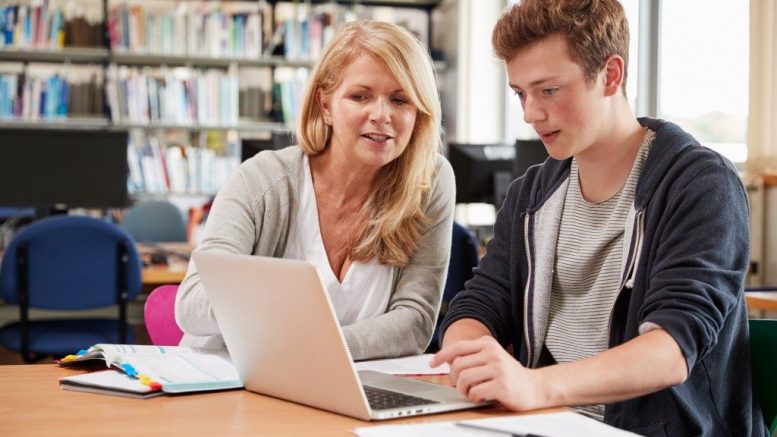 Midday at IMSA is a very busy time for IMSA students. The 1 hour 50 minute reprieve from classes is critical for students to get lunch, catch up on any last-minute assignments due for their afternoon classes, or simply take a nap after a long night. Not only is it essential for students, but also for teachers, as midday is a time to meet with students, understand what they are struggling with, and simply just take a break before their afternoon classes. However, a severe hindrance to one’s midday activities is Titan Crew.

Questions that many IMSA students share are what exactly is Titan Crew and what is its purpose? On July 15, 2020, in an update to the IMSA Board of Trustees, IMSA’s Chief Academic Officer and principal, Dr. Comfort Akwaji-Anderson, introduced the launch of Titan Crew for the 2020-2021 school year.

Her document states that, “Students who feel known and cared for by at least one member of faculty tend to perform at their highest level. Launching distance learning creates an additional critical need for this connection. In the short and long term, a Titan Crew group can serve as a critical space for dialogue about identity, empathy, community, and inclusion.” To discern why Titan Crew needs to be implemented, the document outlines major concerns at the school such as data from the diversity climate survey showing that ⅓ of the respondents felt unsafe on campus as a result of their race/ethnicity, gender, gender expression, sexual orientation, religion, ability, skin color and/or political affiliation, how students from underprivileged backgrounds do not feel as strongly connected to faculty, or how when students heard racist, sexist, and homophobic remarks and an adult was present, nearly 50% of the time, the adult did not intervene.

Titan Crew is meant to address such concerns by having each crew meet twice a week, and hoped to accomplish the following goals:

For more background on the foundation of Titan Crew at IMSA and the data collection that sparked the creation of this program, be sure to check out this article from September 2020 by Mike Trombetta asking “Why Titan Crew?”

At the beginning of the 2021-2022 academic year, the Titan Crew Action Team was formed, composed of faculty members such as Dr. Peter Dong, Dr. Adam Kotlarczyk, Dr. Devon Madon, Mr. Matthew McCutcheon, Mr. Tom Meyer, and Ms. Namrata Pandya. The action team was formed to perform research and make recommendations regarding the program. On March 9, 2022, a report was released by the action team regarding Titan Crew, detailing the data from surveys conducted by both the Office of Institutional Research and the Action Team. The executive summary states, “Surveys answered by 439 students and 42 faculty revealed overwhelming majorities of students (85%) and faculty (97%) support ending the Titan Crew program.” The report will be attached at the bottom of this article.

Utilizing data from the report and student accounts that I’ve collected, I will be providing evidence demonstrating how Titan Crew fails to accomplish its goals.

According to the Action Team report using data from the survey conducted on December 10, 2021, 78.8% of students strongly agree that a member of the faculty knows and cares about them, however, only 21.6% of students attribute this connection to Titan Crew.  Rather, students believe that attending office hours and speaking with teachers in class are more helpful in forming that bond in comparison to forced interactions through a program such as Titan Crew.

The report indicates that 55.2% of students believe that a faculty member knows their aspirations for life after high school, yet only 18.5% attribute this to Titan Crew. As can be seen from the data described here and in the previous section, Titan Crew is not responsible for achieving its own goals. Rather, allowing students that time during midday to interact with faculty in a more natural manner would be far more beneficial to forming student-faculty connections.

55.9% of students who completed the survey strongly disagreed with the statement that Titan Crew helps them feel connections with students across grade levels. Many student and faculty responses outlined in the Action Report reveal the shared sentiment that perhaps online, such a program was necessary due to physical isolation, but in person, the program simply is not a necessity. Junior Jacqueline Zhang (‘23) explains how, “It’s honestly unnecessary because although it was a way to form relationships online, now that we’re in person and we have our hall environment and class environment, we don’t need that anymore. It’s a waste of our time and the faculty’s as nobody shows up and we could be doing better things instead.” Others find redundancy between Titan Crew and programs such as Navigation or Residential Life. Sophomore Destiny Ha (‘24) says, “We don’t need Titan Crew and Navigation, Navigation makes more sense and it helps kids more in my opinion.”

Not only has Titan Crew neglected to fulfill its mission, but it has also created significant problems for the IMSA community, three of which I’ve outlined below.

The Action Team’s report words it best in that, “Perhaps the most disturbing finding in this section is that more than one in three students and more than four in five faculty characterize Titan Crew as a source of stress. In an environment that is already often extremely stressful for students, teachers, and administrators, and made more so by the continuing challenges of the pandemic, this finding should give the institution serious pause.” To further understand the contents of the Action Team’s report, I spoke with a faculty member on the team, Dr. Adam Kotlarczyk. For him, “a lot of the stress came from the feeling Titan Crew is taking away time from working with struggling students. One of the findings in our report was teachers reporting they’d had to cancel or postpone meetings with students who needed help in order to supervise Titan Crew. Students also reported not being able to see teachers. There is only so much time in a week, and it is stressful to have less time to help the students who want it.”

When given the statement, “Titan Crew takes away productive work time for me”, 77% of students strongly agreed. Additionally, 95.2% of faculty strongly disagreed that Titan Crew is a productive use of faculty time. Midday is an incredibly important time for students whether it be to do work or simply take a break from the stress they may encounter throughout the day. Additionally, as Dr. Kotlarczyk described, midday is a time for students to come and ask teachers for help. Titan Crew impedes students and faculty from being able to most effectively utilize their midday.

Dr. Comfort Akwaji-Anderson herself said in her update to the IMSA Board of Trustees, “we have found that many students do not feel equity at IMSA,” yet Titan Crew seems to exacerbate this issue rather than minimize it. When faculty were asked whether the Titan Crew provides the same experience equitably for all students, 66.7% strongly disagreed. Jakob Bachhausen, IMSA Student Council President ex-officio, elaborates on considerations listed in Dr. Akwaji-Anderson’s report, noting that, “Forcing students to build artificial relationships does not mitigate sexist or other types of comments that make students feel uncomfortable, it just forces students to create baseline conversations with people they don’t know. In order for those problems to be addressed, students need to be educated on those biases, not forced to build friendships.” To provide students a more equitable experience, students and faculty need to be more educated on their biases rather than simply trying to bond for forced, 30-minute sessions twice a week.

As of right now, Titan Crew is said to be implemented for the upcoming 2022-2023 school year. Bachhausen explains how IMSA’s student council had attempted to set up two meetings with Dr. Akwaji-Anderson regarding the continuation of the program, yet both meetings were canceled. As for the implementation of Titan Crew for the upcoming year, he reveals that the midday as opposed to being divided into three sections may now be split into two, with one of those sections is specifically dedicated to Titan Crew. When asked why the Titan Crew program has not yet been retired despite the overwhelming evidence against it, Dr. Kotlarczyk answers, “That’s a great question, and it’s one we have ourselves. As a committee, the Titan Crew Action Team is only empowered to do research and make recommendations. We don’t have the authority to make the decision to retire the program, no matter how overwhelming the evidence.” Hopefully, the institution comes to the conclusion outlined throughout this article: that the program has not only failed to accomplish its goals, it has caused harm to the IMSA community, providing more than enough reason for its retirement.

Be the first to comment on "The Case Against Titan Crew"