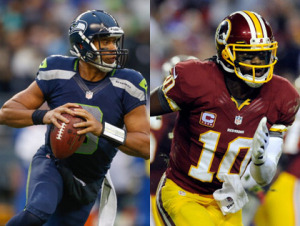 Since Week 3, with a couple of gaps, I have provided you with weekly insightful (at least to me) Power Rankings. Now, here’s the great thing about Power Rankings: I only have to write about the past. Sure I made a couple predictions here and there but nothing that anybody can really hold me to. Making a prediction in a Power Rankings article is similar the points on Whose Line is it Anyway? Well, the time for cowardice is over. I am going to preview the NFL Playoffs and give you my picks for the Super Bowl.

This week, we start with the wild card round. This Saturday, two games will be played. The first between the Cincinnati Bengals and the Houston Texans and the second between the Green Bay Packers and the Minnesota Vikings. On Sunday, we have the Indianapolis Colts vs. the Baltimore Ravens followed by the Seattle Seahawks and the Washington Redskins.

Let’s start with the Bengals and Texans match-up. On paper, this is a very intriguing game. On one hand, we have the Bengals who, since their Week 9 loss to the Denver Broncos, have lost only once. The Texans, on the other hand, come in with a lot more negativity surrounding them. Once a solid lock for the top seed in the AFC, they slipped down to the #3 seed due to a 2-3 record in December. Texans’ quarterback Matt Schaub hasn’t turned the ball over but he hasn’t really done anything positive either. Their top running back, Arian Foster, has had only one game in which he has rushed for more than 100 yards in the last month.

The Bengals, in contrast, are full of optimism. Their top two offensive players, quarterback Andy Dalton and wide receiver AJ Green, have avoided sophomore slumps and led the Bengals to consecutive playoff appearances. This sort of occurrence has been unheard of recently in Cincinnati. Surprisingly, it’s their defense that has really given this team a jump start. While the offense ranks 22nd overall, the defense ranks a stout 6th. The key to their success has been the pass rush. They rank 3rd in the NFL in sacks with 51. Combine that with a solid play from veteran cornerbacks Leon Hall and Terence Newman and one has the recipe for a shutdown defense against the pass.

Despite the fact that these two teams are going in opposite directions, I’m going to stick with the Texans in this one for two reasons. First of all, they are at home, where they have only lost two times all year. Secondly, they have the soon-to-be defensive player of the year, JJ Watt, on their team. I think his ability to play both the run and the pass as good as any defensive lineman in the NFL combined with a resurgent running game should give the Texans enough juice to get across the finish line in this match-up. Prediction: Texans 27 – 20 Bengals

The next game, between NFC North rivals Green Bay and Minnesota, is far easier to decipher and predict. Green Bay has Aaron Rodgers and a receiving core that is second only to New England while Minnesota has only Adrian Peterson. Sure Minnesota won an emotional game at home this past weekend against these same Packers but how much can we really garner from a single result? After all, Minnesota had home field advantage and a determined running back sprinting towards one of the untouchable records in the NFL history. They were destined to win. I was on the road home from Georgia while listening to this game on the radio and I could hear the sheer excitement and optimism through the car speakers. It’s a feel-good story but also one that usually ends in a huge emotional letdown the following week.

Emotions aside, here are the facts. Green Bay’s quarterback Aaron Rodgers threw for 39 touchdowns against 8 interceptions this year. That’s the best touchdown-interception ratio in the league. His wide receiver corps is finally fully healthy and the defense is looking up as well. The only disadvantage for them is that their run game is nonexistent, meaning that they will have no means to control the clock. But how much is that going to matter if the Packers race out to an early lead? Minnesota’s defense is the X-factor in this game because they have been stout all year but their coverage late in the game last week was spotty. No team can walk onto Lambeau Field with spotty coverage and expect to escape without giving up a lot of points. Offensively for the Vikings, Adrian Peterson can only do so much. Prediction: Packers 31 – 14 Vikings

On to Sunday’s games. The first one on the docket is between the red-hot Indianapolis Colts and the anything-but-hot Baltimore Ravens. This one has the potential to get ugly very quickly. The Ravens have lost 4 out of their past 5 games while the Colts have won 5 of their past 6. The Ravens’ trajectory this season looks an awful lot like the Texans’. The only difference between these two teams is that the Ravens have dropped off a lot more than the Texans. Key injuries to defensive stalwarts like Ray Lewis and Terrell Suggs have had them limping towards the end of the season. Couple that with an offense that has been incompetent since their Week 10 rout of the Raiders and the Ravens’ chances seem low. However, there is an X-factor in this game as well. Ray Lewis’ retirement may be the spark that they need. I don’t think it will be enough but crazier things have happened.

The Colts, on the other hand, just got their head coach Chuck Pagano back after he missed most of the season due to his battle with leukemia. The Colts caught fire once his replacement Bruce Arians took over the reins as rookie quarterback phenom Andrew Luck guided the offense to a surprising 11-5 record. They didn’t miss a beat last week when Pagano returned as they impressively handled the Texans at home. All signs point towards their roll continuing while the Ravens look more like a team waving the white flag. Prediction Colts 20 – 10 Ravens

Finally, we get to the match-up that is the most intriguing. The Seattle Seahawks vs. the Washington Redskins. This is rookie quarterback vs. rookie quarterback. Russell Wilson vs. Robert Griffin III. Quite honestly, this has the makings for the next decade’s Brady-Manning rivalry. Both of these teams are on a roll as well. Seattle has been beating teams over the head with a club recently. They are averaging 38.6 points per game in December! That’s nearly 40 points a game for a team with a defense that has only given up 15 points per game. That is beyond ridiculous. The knock against the Seahawks all year has been their offense. But, as we have seen in the last month, Russell Wilson is a legitimate quarterback who is leading an offense that looks scarier every week. As long as defensive headliners Richard Sherman (who just won an appeal and now doesn’t have to serve a suspension for PEDs), Brandon Browner (who is coming back from a suspension), and Chis Clemons keep playing like they have been all year, Washington will be lucky to score more than 15 points on this group.

However, then the RGIII factor comes in. Washington’s own rookie quarterback has been lighting up the scoreboards since Week 1. The reason for his success is simple: he can run like Michael Vick and throw like Tom Brady. His athleticism alone provides yips to his opponents. In addition, he can step back and throw just as well as anybody. Not only that, he can dissect defenses better than above average quarterbacks. Put that together with the read-option attack the Redskins employ as well as another rookie standout in running back Alfred Morris and one has the recipe for an offense that is hard to stop. The defense is another story. They have been stout against the run but have given up huge numbers through the air. Linebacker London Fletcher is the anchor of this defense and is someone to watch this Sunday. Across the board, they are significantly weaker than Seattle in all areas defensively.

Then, on paper, this game should be simple to decide. Seattle should dominate defensively and do enough offensively to run away with this game. However, nothing is certain in the NFL. RGIII could go off. Seattle simply has not played against a team with a quarterback who is like him. The closest team they have faced this season with an RGIII-type quarterback was the 49ers who start Colin Kaepernick. They manhandled him during that game so there is reason to be confident if you are a Seahawks fan. Let me warn you, though. The game against the 49ers was at home while this game will be on the road in a stadium that will be going nuts. This is the closest that Redskins’ fans have had to a Super Bowl team since the Joe Gibbs days and they will be out in full force. So, I don’t think the Seahawks will run away with it. Regardless, I still think they win. Prediction: Seahawks 30 – 28 Redskins

All in all, Wild-Card Weekend will be full of excitement. Below, you will see my bracket for the entire postseason (click on the image if you have trouble reading it). Check back next week for another detailed preview of the Divisional Rounds! Be the first to comment on "NFL Wild-Card Weekend Preview"