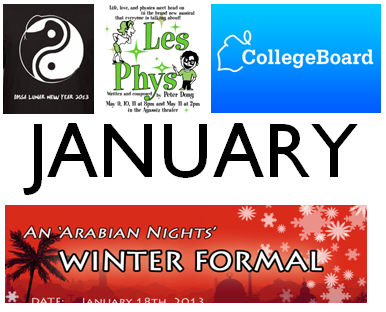 Nearly a week has passed since the final Intersession for the Class of 2015. Already, students have wet their feet if not entirely cannon-balled into second semester, finding that memorizing effectively might just come in handy, perhaps wishing for blind grading this semester,  or discovering that IMSA really does live up to its name of ‘Illinois Malnutrition and Sleep Deprivation Academy.’ Beyond academics, the fitness center has observed a full attendance of students diligently following their New Years’ resolution. It’s a new semester —  a new year.

So what does the near future have in store for us?

Students have the opportunity to hear anecdotes, advice, and life lessons from Dr. Kiely at his Last Lecture. Inspired by Randy Pausch’s Last Lecture, IMSA’s Last Lecture series  features faculty members presenting a speech as though it were their last.

Many moviegoers have seen recent blockbuster Les Misérables. IMSA students have seen Les Phys – or are planning to do so. Physics teacher Dr. Dong’s senior thesis is a musical about physics, an interesting combination that students will surely enjoy watching and critiquing.

This year’s Winter Formal takes on the exotic with the theme of Arabian Nights. Organized as a collaboration between Junior and Senior Class Club, the dance will cleanly wrap up students’ first true school week of the second semester with music, dancing, and relaxation.

***Tickets will be sold throughout the week of January 14-18 and will be available at the door as well. To the amusement of Collegeboard (and excitement of its wallet) and to the anguish of most high school juniors, the season of standardized testing has begun. Despite their nervousness, many students have not forgotten that Collegeboard was so cordial as to supply a variety of different exams from the mandatory SAT general test to the almost rainbow-like array of subject tests to, finally, May AP testing. Looks like IMSA’s juniors will be busy this semester testing them all out!!

Interested in Asian pop songs, explosive choreography, traditional music, or, oh, a combination? ASIA’s Lunar New Year (LNY) show has you covered! The annual LNY will showcase the singing and dancing talents of IMSA’s students as a celebration of the new year and Asian culture.

The Sophomores-At-Large for the Class of 2022