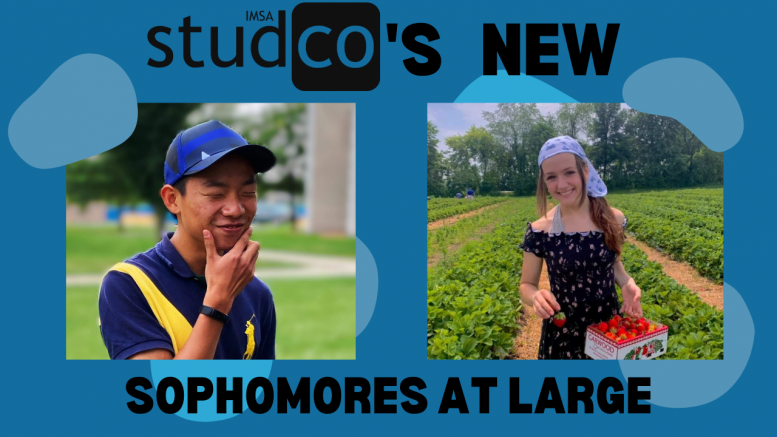 As of Thursday, October 14th, sophomores Marguerite “Maggie” DiMarco and Zuyu Liu were announced as the newly elected 2021-22 Sophomores at-Large (SALs), tasked with representing the Class of 2024 in the IMSA student council. DiMarco is an avid enjoyer of the performing arts, runs for cross country and track, and is a member of Speech team, Mod21 (IMSA’s a cappella group), Psych Club, and Student Ambassadors. Liu is a member of the Titans Basketball team, the Congress Debate team, Health Occupations Students of America (HOSA), and Amnesty International.

The candidates are a cohesive duo, holding passionate views about the improvement of IMSA policies, mainly those that influence communication between students and faculty and sustainability on campus. In an interview, the SALs explained their plans for IMSA’s future and gave us a behind-the-scenes look at the application and campaigning process.

Consisting of three main segments and spanning several weeks, the Sophomore at-Large application process was extensive, indicative of the responsibility and importance held by the position. The preliminary essay prompts came first, including topics such as candidate strengths and weaknesses, methods of working with administration, and project budgeting.

“I liked the analysis-based questions,” says Liu, “[they] made me think and actually connect with the IMSA student body.”

After cuts, the remaining candidates were interviewed and grouped into teams to compete in simulations. In these events, candidates were asked to interview and poll students across campus on issues of their choosing and create a solution based on their collected data.

Finally, the remaining candidates created campaign speeches that they gave to the sophomore student body on Wednesday, October 13th. “I’ll admit,” comments DiMarco, “the speech was a little scary, but I tried to release my inhibitions and deliver.” The campaign was extremely thorough, allowing students to showcase their critical thinking in relation to public policy, their personal experiences with leadership and problem solving, and their skills in public speaking and crowd appeal.

Together, DiMarco and Liu plan on targeting two significant issues: sustainability and communication. Historically, IMSA’s sustainability efforts have been concentrated into one week, Sustainability Week. However, the SALs, in collaboration with the rest of student council, plan on extending these efforts to span the school year, tentatively named the Sustainability Initiative. This initiative will encourage education and awareness throughout the student body regarding topics such as recycling, minimizing food waste, and other related issues. In particular, DiMarco took inspiration from IMSA’s mission statement: “…to ignite and nurture creative, ethical, scientific minds that advance the human condition.” DiMarco further elaborates, “This is our duty to uphold the values of our school. We are given the opportunity to set a precedent for other schools and others in our generation, to shake things up.” There are also plans to introduce indigenous flowers to the IMSA campus, rather than alien plant species.

Additionally, as highlighted in Liu’s speech, the SALs plan on solving ongoing communications issues at IMSA. Many students feel overwhelmed with daily emails including messages from teachers and administration, technology updates, and programming information. “It’s really overwhelming,” says Joseph Paras (’24), “there are so many [emails] at once, and I’m afraid I’ll miss something important.” Manya Davis, another sophomore, further explains, “The amount of emails that IMSA sends out to students seems like an effort to enhance communication, but it actually prohibits students from receiving critical information that pertains to them.”

Liu has an elegant solution: creating an IMSA community hub page that centralizes all of the information. “There are some websites where you can organize a workspace into a page of announcements and then subpages into different clubs, instead of sending an email every single time.” Additionally, pages such as the IMSA Virtual Campus (IVC) can be used as alternative modes of mass communication, allowing emails to be spaces for conversation between students and faculty. DiMarco adds, “A quote that I liked that helped me get through the campaign was, ‘The single biggest problem in communication is the illusion that it has taken place.’ This is kind of what we see occurring at IMSA, and we want to address this issue.”

On the topic of communication, DiMarco and Liu emphasize the importance of hearing feedback from the student body. “I am your representative,” DiMarco clarifies, “I want to leave the power to the people, [and] what you want to see is my duty to facilitate.” Together, the SALs plan on addressing the opinions, values, and perspectives of each student. Liu mentions the school’s equity-based initiatives: “Currently, I think they are so focused on equality. I feel safe at IMSA, and I feel I am being treated as an equal. I want every student to feel this way.”

Alongside these major projects, the SALs have some minor projects they are working towards. “There’s an all-class event for the end of the semester including all the sophomores which we are very excited about,” says Liu. Additionally, DiMarco would like to introduce a musical theater program to IMSA through the drama club. “I think it can be done because there is so much interest.”

Overall, SALs plan to run a transparent office, allowing student opinion to govern decision making. “At the end of the day,” says DiMarco, “I should be a window looking into StudCo. That is paramount.” Together Liu and DiMarco make a strong duo and a promising addition to IMSA’s student council.

5 Things to Look Forward to this January

Be the first to comment on "The Newly Elected 2021 Sophomore At-Larges’ Interview!"