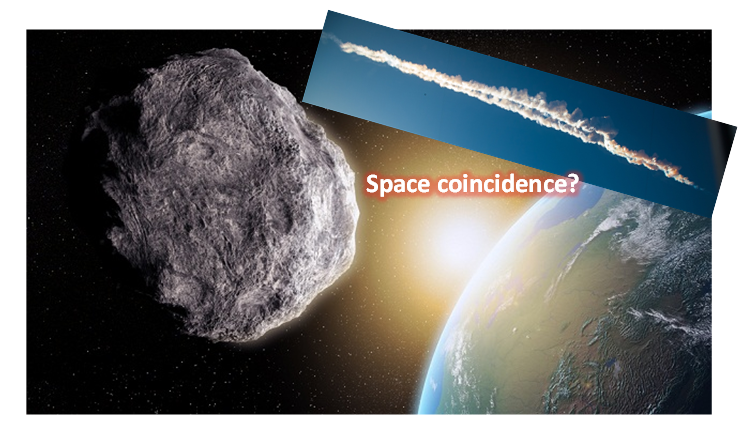 It seems like Russia has a propensity for attracting space debris. This morning, a meteor zoomed towards the Earth, reminiscent of the 1908 Siberian Tunguska event. The city primarily impacted, Chelyabinsk, had also experienced the Kunashak meteor rain in 1949.

Though the meteor exploded in the Earth’s atmosphere, its subsequent shock wave shattered windows and glass, injuring about 200 children. Estimates for total injuries caused by the fireball range from 1,000 to as high as 1,200 individuals. The state-run RIA Novosti news agency released a statement approximating that about 3,000 buildings have been damaged from the shock wave. 80 million trees were also felled. Though most fragments of the exploded meteor disintegrated, two impact sites were found near Chebarkul Lake and one near the town of Zlatoust.

Read more about this meteor, also known as a bolide, here.

However, today’s meteor explosion was not the only close encounter Earth had with asteroids. Asteroid 2012 DA14­ also passed by Earth with reported distances ranging from 17,100 to 27,700 km. While the Russian fireball had not been detected before its entry into the atmosphere, experts had calculated that 2012 DA14 would not collide with Earth. Though close in time, this asteroid and the fireball were not related. Interfax Russia reports that most scientists agree that the two incidents are not related; the two objects had differing trajectories. Regardless, February 15, 2013 makes space history with the largest meteor to impact Earth and with the closest shave by an asteroid in known history.

Further note: To clarify on some of the terminology being slung around in news articles, an asteroid is a rocky, orbiting solar system body that stays in space. Once an asteroid enters the Earth’s atmosphere, it becomes a meteor. Meteors vaporize and burn upon entry, thus never physically colliding with the Earth. If it does make contact and land on the Earth, it is then known as a meteorite. A meteoroid is distinguished from an asteroid by size; they are the smaller counterparts of asteroids. Therefore, 2012 DA14 would be classified as an asteroid, while the Russian fireball can be called a meteor or meteoroid. The fragments of the exploded meteor may be referred to as meteorites.

Who is Alexei Navalny?

Ukraine on Edge Amid Fears of a Russian Invasion

Be the first to comment on "BREAKING NEWS: Fireball Injures about 1,000 People"