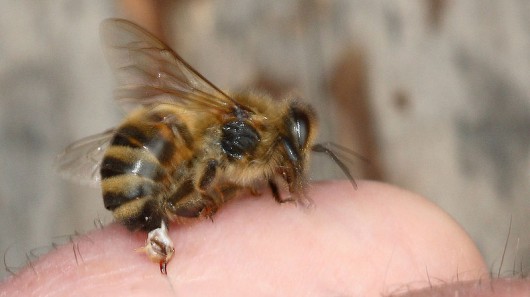 Last week, a Mississippi toddler appeared to have been cured of AIDS, sending shock waves throughout the globe. The baby girl was born with the HIV virus, spotted nearly 30 hours after her birth. Since then, doctors from across the nation began an aggressive regimen of widely available drugs, in combination with novel antiretroviral medications developed by researchers at Johns Hopkins University. Only a month later, virus levels were virtually undetectable in her body, and the toddler was deemed cured of the HIV virus, a medical first.

Now, novel medical research at Washington University in St. Louis has revealed that specific nano-particles collected from bee venom may possess the ability to kill the virus. The key to this discovery, which was synthesized by professor and renowned investigator Samuel A. Wickline, involves cytolyic melittin peptides. Melittin is the primary substance found in bee venom, and it has the fortuitous trait of being able to degrade the protective fatty plastid that surrounds HIV.

In its experimental procedure, Wickline’s team prepared a sample of melittin-loaded nanoparticles, as well as free melittin as a control, and set them against various strains of the virus. The researchers then showed that, when delivered in these large and free accumulations, melittin contributes to the degradation of the pathogen. But perhaps the most noteworthy aspect of the substance is its ability to target the viral particles while still leaving other cells untouched, which generally bodes well for the development of a new virucide. The melittin extracted from the venom is then relocated into a gel than can be applied vaginally.

Unlike other approaches, which work to prevent HIV from replicating after its invasion of somatic cells, Wickline’s technique involves the degradation and lysis of the virus’s protective membranes. Therefore, the recent breakthrough at Washington University is the first conceptual proof that the therapeutic and safe application of a nanoparticles can directly combat HIV.

First Woman in the World Cured of HIV

Be the first to comment on "Venom for the Cure? New Advancements in Remedies for AIDS"