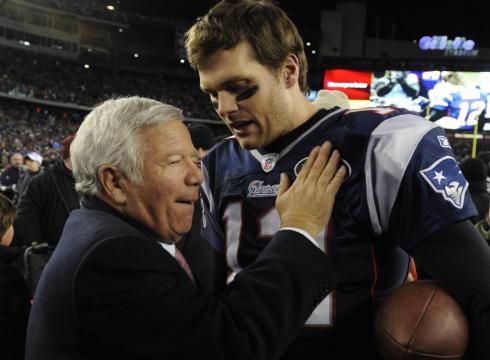 Considering that it has been nearly a whole month since I have written about the NFL, there is a lot to catch up on. Starting mere hours after the end of the Super Bowl, teams immediately began jockeying for position in the mad scramble for free agents. This part of the year is always intriguing because, depending on how a specific team handles this part of the off-season, one can get a good gauge of where their season will be going. Already, the Kansas City Chiefs have traded for their quarterback of the future (Alex Smith), the Baltimore Ravens signed Joe Flacco to the most lucrative deal in league history, and the New York Jets have attempted to trade Darrelle Revis. All big moves in their own right but one move in particular caught the attention of the entire NFL.

Last week, New England Patriots quarterback Tom Brady signed a three year contract extension to stay with the Patriots. Whenever a high profile player signs any sort of contract, it is big news. But Brady’s decision had details that polarized many people, the primary issue being the apparent reduction of his salary. So what has everybody in such a frenzy?

To understand this situation, one must understand the structure of contracts in the NFL. Essentially, teams have a certain limit on how much money they can spend on players in a given year. This is known as the salary cap. Each player’s contract has a designated “cap hit” or the amount that their contract deducts from the total salary cap of the team. In Brady’s case, his cap hit this year would have been $21.8 million under his old contract. Now, under his new one, it is $13.8 million.

For the Patriots, that’s an extra $8 million that they can use to re-sign key veterans, most notably Wes Welker, or to make a big splash in free agency. For Brady, his deal now includes more guaranteed money while also allowing him to be surrounded by higher quality talent paid for by the money he gave up. So for both the Patriots and Brady, the situation is a win-win.

But for the many NFL fans this move further vilified the already much-resented Patriots. This hatred is ironic given that society would usually view the act of taking less money for the benefit of the group to be a noble one. It exemplifies the notion of taking one for the team. So is there something specifically malicious about what the Patriots and Brady did? Or does this say something about how our society really views things?

Make no mistake, Patriots fans across the country are unanimously in favor of this new contract. After all, a deal that allows the team to keep a top 5 quarterback for $8 million less a year is a huge plus. However, a small but vocal group of fans are less than thrilled. The comment boards at ESPN have been filled with plenty of comments in which some fans express their distaste for Brady and the entire Patriots organization.

We don’t need to look far into the past to see another example of this. In 2010, when LeBron James joined the Miami Heat, there was an uproar throughout the NBA. Like Brady, James took what many believed to be a pay cut so that the Heat could sign other All-Stars like Dwayne Wade and Chris Bosh. Instead of being praised for his commitment to winning, James was crucified nationally for what the rest of the NBA believed was essentially cheating.

That’s the paradox of professional sports contracts. There is an unspoken rule that players should be paid what they are worth. It’s not because those extra $8 or $10 million makes any difference to those specific athletes as both James and Brady will go on to make more than enough money. However, their decision has a ripple effect over the rest of their respective leagues.

The fact that they are willing to take a pay cut instantly depresses the salary potential of other players. From the other teams’ perspectives, their players will have to take pay cuts as well in order to remain competitive. It offers them a bargaining chip in contract negotiations. From the players’ perspective, their already relatively short careers will now not be rewarded nearly as richly as they may have been had the market not reduced their value. It is simple economics on both sides. So from a professional’s point of view, a certain amount of resentment towards players like Brady and James is understandable.

However, from a fan’s perspective, the hatred of them is truly irrational. For the rational fan, the solution is simple. Team owners need to be smarter when handing out big contracts to individual players and the players themselves should be willing to sacrifice in order to succeed.

But the term “rational fan” is an oxymoron. Fans are driven by a passion to support a team for reasons that often don’t make much sense. Similarly, their hatred of certain teams or players does not make much sense either. For example, a Chicago Cubs fan really has no practical reason to hate the Chicago White Sox other than geographic proximity. They are in completely different leagues and only play each other in a couple meaningless games every year assuming they don’t make it to the World Series. The hatred persists nonetheless.

In James’ case, the average American sports fan does not hate him because he took a pay cut. He or she hates him because he didn’t take a pay cut for his or her team. Instantly, it’s seen as “cheating” or “stacking” or whatever else you prefer to call it. Fundamentally, there is absolutely nothing wrong with what he did. Early on in his career he was derided for not being committed enough to winning so he did something about it. There is something commendable about his decision (no pun intended) removed from all the other fluff that surrounds much of sports discourse.

Similarly, many fans are upset over Brady’s contract simply because their own respective quarterbacks refuse to do the same thing. They may say things like “oh, he’s cheating” or “he is an [insert vulgar name]” but those comments have little to do with the actual issue. The real issue is the inability of an athlete to put winning ahead of a great pay day. Arguments can be made about which is more important but that’s the basic decision that athletes make when they begin contract negotiations.

So all of this brings me back to my original question: what does all of this fuss tell us about the way our society views certain actions? It is useful to analyze examples from sports when answering this question because that’s when we are truly closest to our most basic nature. And this reaction proves something about human nature: it’s ugly, selfish, and devoid of much innate rationality.

Consider that the next time you watch a sporting event in which you have rooting interest. From the beginning to the glorious moment of victory or agony of defeat, you are participating in the greatest case study of human nature ever conducted.

The draft is the next major event on the off-season schedule. The general feeling around the NFL is that this draft will be short on quarterback talent but deep at other key positions like wide receiver, safety, guard, and tackle. That is not great news for teams with sub-par quarterback situations like the Arizona Cardinals and New York Jets. It will be interesting to see how those teams manage the draft given these constraints.

Out of all the teams in the NFL, the Jets are in the worst position. They have two quarterbacks that haven’t proven themselves as viable options (Mark Sanchez and Tim Tebow) but have no wiggle room under the cap to make any significant moves. They can’t release Sanchez because the penalty would be too high so the best they can hope for is a marginally better year than last year.

Among teams to watch in the coming months, the Patriots, Indianapolis Colts, Cincinnati Bengals, and Atlanta Falcons are near the top. Each of these teams made the playoffs this past year and have a significant amount of cap space to make moves in free agency. They should be able to address specific deficiencies which means the rest of the NFL will be in serious trouble.

With baseball season starting soon and basketball season kicking into high gear, football takes a backseat this time of year. But it’s in these next couple months that next year’s Super Bowl champion is decided. So pay attention because many teams are one draft pick or obscure free agent signing from hoisting the Vince Lombardi trophy next February.

Be the first to comment on "NFL Off-Season Ramblings: Contracts, Irrationality, and Human Nature"