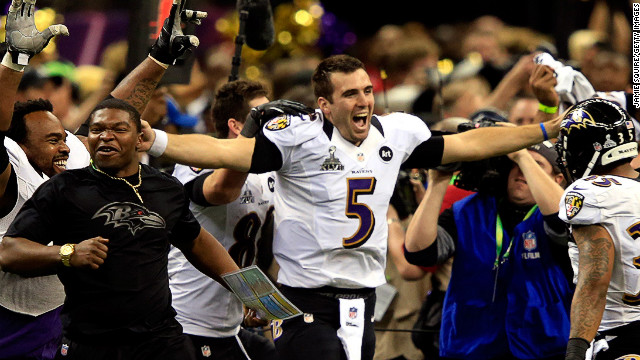 So this is how my sports journalism career ends… with a power outage, goal-line stand, and safety. I said last week that an incorrect prediction in the Super Bowl would leave me under .500 for the playoffs in terms of my picks. Well, my prediction was that the San Francisco 49ers would win 20-17 over the Baltimore Ravens and obviously that didn’t happen. Looking back, it was probably unwise to put my credibility on the line in a game that everybody believed was too close to call. The most unfortunate part of this is that if I decide to pursue journalism, my portfolio is going to be full of incorrect predictions. But, such is life. My failures aren’t going to deter me from writing this wrap up article on the Super Bowl.

The game did not start with any fireworks. A long pass on the first play of the game was brought back by an illegal formation penalty on the 49ers and the drive ended with a three and out. But then the Ravens returned the ensuing punt 17 yards and drove 51 yards for the touchdown. This drive epitomized what the Ravens were able to do to the 49ers for the entire first half. Super Bowl MVP Joe Flacco looked deep on his first read and if it wasn’t there, he dumped it off for little chunks at a time. The 49ers looked like they just couldn’t cope with the arsenal of weapons the Ravens possessed as the Ravens receivers were extremely open on multiple plays. The blame doesn’t fall solely on the 49ers’ secondary, however. The fact remains that the pass rush was unable to force Flacco into quick throws.

As a result of this defensive incompetency, the Ravens scored 14 unanswered points and led by a score of 28-6 early in the 3rd quarter. Following a kickoff return for a touchdown (which tied for the longest in NFL history) by the Ravens’ Jacoby Jones, the 49ers found themselves scrambling. They couldn’t defend the Ravens’ offense and their own offense couldn’t seem to get anything going. But then, something unexpected happened. The power in the stadium cut. Just like that, the Ravens lost all their energy. Soon after the power was restored, the 49ers marched up and down the field. Soon the score was 28-23. After a little more back and forth, the Ravens stretched their lead to 5 points with 4 minutes left in the game, effectively forcing the 49ers to go for the touchdown on their last drive. They drove all the way down to the Ravens’ 5 yard line but couldn’t punch it in (more on that later). After giving it back to the Ravens on downs, the 49ers were forced to watch the clock slowly tick away. They had one last gasp at the end of the game when the Ravens were forced to punt but a clever decision reduced the 49ers’ chances of winning into the struck-by-lightning category.

Usually when reviewing a game, I will point to a key point in the game where the losing team could have changed the outcome. However, this game was so full of opportunities for the 49ers to stage a successful comeback that I may accidentally overlook some.

The first came at the end of the half. The Ravens just scored on an amazing 56 yard touchdown throw from Flacco to Jones. At this point the score was 21-3. I remember saying that the 49ers needed to respond, otherwise this game was going to be out of reach. 49ers quarterback Colin Kaepernick was able to methodically drive down the field and into the red zone with nearly a minute left in the half and two timeouts in hand. Somehow, they were unable to punch the ball in and were forced to settle for a field goal. At this point, it was clear the 49ers were in trouble because they couldn’t even get the momentum to shift to their side at a critical juncture in the game.

Yet despite their sloppy play, the 49ers managed to climb back into the game. Of course they were aided by the power outage but the fact remains that they were able to make the game competitive. Still, before the outage there was little to suggest that such a comeback was possible. They were down 28-6 and couldn’t stop any aspect of the Ravens game plan. But then, after the unexpected break, they started to mount a rally. Kaepernick started connecting on throws to tight end Vernon Davis and wide receiver Michael Crabtree. Running back Frank Gore also provided a spark on the ground as the 49ers clawed away at the Ravens’ lead. After back to back touchdowns, they were given another gift when Ravens’ running back Ray Rice fumbled the ball deep in Ravens’ territory. This was their best chance to possibly tie the game with a touchdown and two-point conversion. Instead, they went three and out and settled for a field goal. At this point, I remember telling those around me that the 49ers lost most of their momentum and that this game was now going to be a dog fight. If they converted the opportunity into a touchdown and considering the way the game was going at that point, they would have won.

Yet, despite all of this, they had one last shot to punch it into the end zone. On their last drive, they were able to advance the ball all the way to the Ravens’ 7 yard line after a series of electrifying plays. At this point there was 2:39 left in the game so the 49ers went into clock management mode. They didn’t want the Ravens to have too much time to mount a drive if they scored on this possession. But for some unknown reason, they decided to give the ball to running back LaMichael James on first and goal. Gore should have been the one to take the ball at that point. On the next play, Kaepernick attempted to force a throw into tight coverage at the goal line to Crabtree. The pass was broken up and the clock stopped. Somehow, Kaepernick didn’t manage to get the snap off in time on the next play and 49ers were forced to burn a timeout which was crucial because now they only had one left. The next play was another incomplete pass to Crabtree. Now it was 4th down and Kaepernick floated a pass that was well out of reach of Crabtree and the Ravens took over on downs.

Here’s what was wrong with those specific plays. On second down, they should have run it with Gore. Gore was already averaging 5.8 yards a carry and they were on the 5 yard line. You can do the math. Even if he doesn’t punch it in, they force the Ravens to burn a timeout and, more than likely, they set themselves up at the 2 or 3 yard line with two downs to punch it in. At this point, Kaepernick’s running ability comes into play. He can easily punch it in if he doesn’t like the match-ups he is getting. With two chances at the end zone from close range, I think he gets the job done.

Even if you believe what they did was right on the first three downs, you cannot justify their call on 4th down. An end zone fade like they were trying to execute requires the pass to land perfectly. You can argue that Crabtree was held on that play (I think he was) but the play call itself was flawed. A quick slant or screen would have been a much better option considering where they were on the field. Instead, they relied solely on Kaepernick’s ability to drop the ball on a target the size of a dime. Not a high percentage call on the most important play of the season.

All in all, the Ravens won this game fair a square. They outplayed the 49ers for much of the game and would have probably blown out the 49ers if it were not for the power outage. Their postseason run was incredible and one we will be talking about for many years to come. If you watched the playoffs this year, consider yourselves blessed because stories like that don’t happen often.

Since this season is over, the only thing I can be prognosticating is next season. I’m going to keep this short and simple. Here are five teams to watch from each conference (ranked in order) with a short explanation of what they have going for them:

1.      New England Patriots – all this team needs to become the most dominant team in the NFL is a speedy receiver to stretch the field. Their defense is a continually improving unit with plenty of youth. This could be their last shot to take advantage of Tom Brady’s talent before age takes its toll.

2.      Denver Broncos – if Peyton Manning stays healthy and has no drop off, the sky is the limit for this team. They have all the pieces already in place. Some more depth at running back would be a plus.

3.      Houston Texans – a young team with plenty of talent. If they can figure out a way to start beating good teams in big games, they could dominate the AFC. Stability and growth are the keys for them.

4.      Indianapolis Colts – if they can shore up their defense and surround Andrew Luck with more play-makers, they could wrestle the top seed in the AFC South away from the Texans next year.

5.      Baltimore Ravens – they are the defending champions but one has to ask him- or herself if they will be able to keep this unit together going into next season. Joe Flacco’s contract will eat up their salary cap space and they may have let some key players go.

1.      Seattle Seahawks – this team has so much upside. They have a good core of young players on both sides of the ball and came within 30 seconds of advancing to the NFC Championship game this year. The sky is truly the limit with this team. An improved core of receivers will take this team to the next level.

2.      Green Bay Packers – after their debacle in the Divisional Round, I have new doubts in their ability to adjust on the fly. That being said, with Aaron Rodgers and an improved defense next year, they could easily get the number 1 seed in the NFC.

3.      New Orleans Saints – I think they are going to come out with a chip on their shoulder. They need to show that they are still a legitimate team. The rumored addition of Rob Ryan as defensive coordinator should help shore up their defense. And we can’t forget about Drew Brees.

4.      San Francisco 49ers – they were exposed in the Super Bowl so they have to take a long look in the mirror and see where they can improve if they want to get back to the big game. That being said, they are still a phenomenally talented team. If they can add a receiver on the level of Mike Wallace, their offense could actually be unstoppable.

5.      Atlanta Falcons – they got the playoff monkey off their backs and were well on their way to Super Bowl appearance before a second half collapse. Losing Tony Gonzalez is going to hurt though.

NFL Championship Round Preview: It can’t get any better!

Be the first to comment on "Super Bowl Review: The End of the Line?"