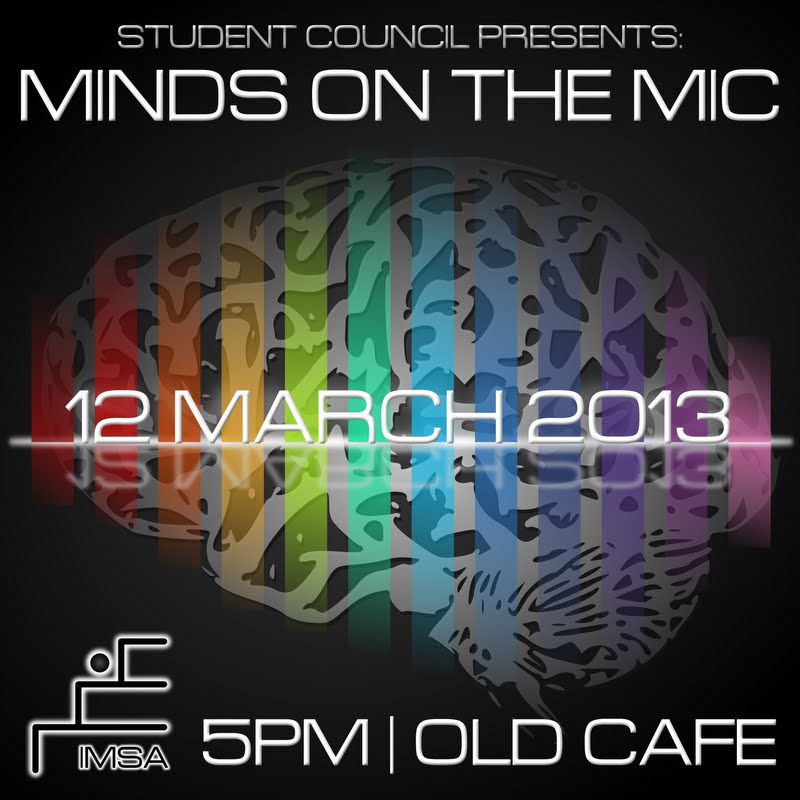 Similar to the renowned TED Talks, Student Council is hosting IMSA’s very own Minds on the Mic event! Set up like a coffeehouse, Minds on the Mic will have a relatively relaxed atmosphere, allowing for your peers to present their personally developed presentations, ideas, thoughts and comments.  So come out to support your peers as they present on relevant, thought provoking topics!

What: Minds on the Mic

Why: To take a break from the end of the quarter chaos by supporting your peers!

A list of speakers and topics is outlined below:

Ryan Eberhardt
The Need for Speed

We live in a fast-paced society that moves so quickly we sometimes don’t even have time to stop and realize this.  The pressure degrades our health, and harms our relationships with those we interact with.  But where is this need for speed coming from?  What can we do about it?

In the late 19 century and early 20th century many mathematicians were optimistic they were closing in on the most essential proofs in mathematics, those which would validate the basis of every proof as infallible and leave no room for assumptions. In 1932, Godel proved this was impossible. It is impossible to construct a system which completely justifies itself, or in other words, one needs faith that the basis of their beliefs are true whether it’s Euclid’s postulates, or the existence of a God.

Anthony Marquez
If you don’t become an actor, you’ll never be a factor.

There seems to be no shortage of complaints or persistent criticism throughout IMSA and society in general. Unfortunately, when it comes down to actually doing something about complaints and criticism, the general consensus reeks of apathy, indifference, and a general lack of willingness to turn words into action. Eh, what’s the big deal, anyways? I’m sure the issue is the responsibility of someone else…anyone else….everyone else.

Ryan Chiu
No Such Thing as a No-Brainer

Many people throw around commonly-used expressions without looking at their true implications. One of these phrases is the term “no-brainer,” often used in daily conversation to refer to seemingly easy tasks that require very few logical or physical steps to perform. But can you really do anything without a brain? In other words, is there really such thing as a “no-brainer”?

America. Land of the brave, the free, and often times the ill informed. Most modern Americans get their political information from political pundits, biased news sources, or opinionated authors. Is America really a successful democracy? The general idea behind a democracy is to make the voices of the citizens heard, but with such ill informed citizens, do we really want them making decisions to determine the fate of our country? Political apathy is a parasite that infects this nation and we need to make America stop living the baylife.

Dallas Eckman
Descendants of the Stars

A qualitative look at the universe in which we live, and our place among celestial giants and infinitesimal bodies through a modern perspective. A universe as beautiful as ours deserves a moment of appreciation.

Arjun Sarode
Be Selfish, Be an Entrepreneur

Entrepreneurship is the best thing. Ever. I’m going to tell you why.

Nanotechnology, the study of nature on the smallest scales visible is an exciting new field. But things get weird at such small sizes. Find out what makes nanotechnology so special and learn why size really does matter.

Piecing together the IMSA triangle through collaboration and building a stronger, valuable student community.

Be the first to comment on "StudCo’s Minds on the Mic Event!"