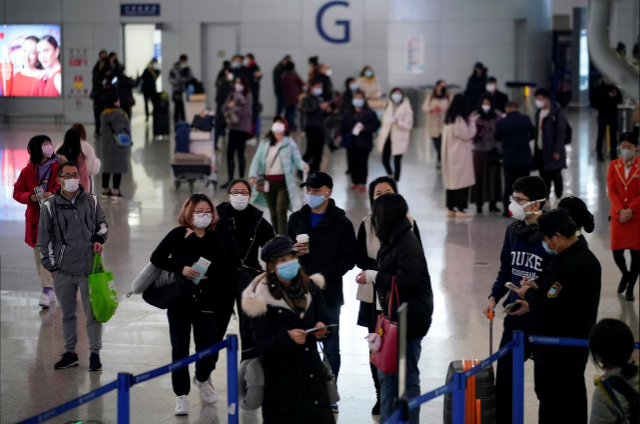 As a child of immigrant parents, I’ve been exposed to two different cultures my whole life: the one I inherited, and the one I was born into. Inside and outside of the home, both are as familiar to me as the other. That’s why when something happens that splits me between both, I’m impacted twice as much.

Take, for example, the culprit behind the world’s current biggest fear, the declining global economy, and infection reports raging across nations like wildfire — COVID-19, more commonly known as the coronavirus. First reported in January in Wuhan, within the Hubei province of China, it has since then taken the lives of nearly 3 thousand people and infected 85 thousand total, almost 30 times as many. Ninety-four percent of these infections are in China.

Ironically, it was during my epidemiology intersession that I heard of the first few cases of the virus outbreak. The instructor sent us an article link and explained that the work Chinese officials were doing to investigate and contain the novel virus paralleled our hypothetical scenarios in class. “Isn’t it cool to see what you’ve been learning is actually being done in real life?” she asked excitedly.

I skimmed over the article, closed it, and moved on, believing at the time that the outbreak would die down. To me, it was just another unimportant, far-removed event that didn’t concern me.

How wrong I was.

Within less than two months, this virus has captured the attention of the whole world. But another epidemic that has traveled much farther and faster has arisen among all the chaos: racism. And it shows.

As the coronavirus spreads, so does hysteria and the fear of Chinese people, five times as fast.

College students, the elderly; men and women alike have been beaten up for wearing masks in public or simply nothing at all. “Diseased b*tch,” one assailant shouted at his victim. Only one person stepped up to help the victim. A few weeks ago, an Asian boy in California was beaten by classmates at school to the point of needing an MRI. “I’m not Chinese,” he insisted. Threads on Twitter contain videos of Chinese people eating bat soup and live mice; beneath them, people jeer: “Looks like dogs weren’t enough.” “Didn’t they learn their lesson after SARS?” “Chinese people are disgusting!”

Sound familiar? I was reminded of another internet movement in the past that has since died down but still exists: activism against the Yulin Dog Festival. That was perhaps when most people, if not already educated on the subject, first began to learn about the custom of eating dog meat, observed by just a small portion of China’s population.

As could be expected, the news caused an uproar among activists and normal e-citizens alike. The extremely small percentage of Chinese people who ate dog meat, the grotesque practice that the rest of mainland China was also trying to eradicate, was suddenly projected onto the rest of the entire country.

And so, any Chinese person was a dog eater. Freshman year, I remember my classmates joking that they’d had their pet dog for dinner. When their gazes turned to me, instantly noticing my black hair and almond-shaped eyes, it didn’t even matter whether or not I was actually Chinese. Jokes turned into half-serious questions. “Do you actually eat dogs?”

There were so many things wrong with asking me that, I simply had no idea where to start. How to explain, without losing their attention, that Chinese people who still ate dogs were considered extremely conservative and probably made up a single-digit percentage of the entire Chinese population? How to explain that this had nearly nothing to do with me since I had been born in America and I was practically one of them?

These were the exact questions I asked as my fingers hovered over my phone’s keyboard, itching to respond to those coronavirus tweets. I wanted to point out that not all Chinese people ate bats for fun.  It’s not other Chinese people’s fault that they got infected by the virus. Not all Chinese people are disgusting, not all, not all, not all. But it seemed desperate and futile. Why did I need to waste my time trying to convince a nameless stranger over the internet? But I couldn’t tear my eyes away, and for the next couple of hours, I just kept scrolling and scrolling, reading every insult and accusation.

Now, the question has evolved into something else. And evidently, it’s not just immature teenagers who are asking it. I can feel the impact outside of school. Going to a restaurant to pick up food elicited stares, even though I only stayed for around ten minutes. A family who was eating there paused their eating and kept glancing at me and my mom the entire time, leaving me feeling like a specimen.

Another time, I was walking outside and sneezed into my arm. Immediately, I looked around and felt scared, then idiotic. There was no one else nearby and I wasn’t sick, only scared that someone had seen me sneeze. When had I adopted this mindset of timidness, half-expecting someone to storm up to me and ask if I was infected? I’d always heard of cases of prejudice happening to others, but was this what it felt like being the recipient of it?

Truthfully speaking, my fear was reasonable; justified, even. Unlike with the dogs, Asian-American kids did have a tie to the coronavirus situation, having family who had recently traveled to or from East Asia for Lunar New Year. But when this simple fear materialized into actions — words, stares, violence — I find myself asking, what have we all come to? I know that all this malice aimed toward Asians is just that — fear. But as someone who’s part of the target population, it’s easy to forget this and become overwhelmed by the hate.

And so I’m sitting here, typing the words I wanted to say to that family back in the restaurant. We’re just like you. We’re also trying to stay safe through all this. But to them, “we” have long since become the “other.”

We IMSA students seem to live in a secluded bubble. You usually can’t find such blatant racial ignorance and slander on our campus grounds. And if the occasional joke does surface, no one is really hurt because everyone knows there’s no intentional malice. But every time I open Twitter or Instagram, the outside world spits in my face and reminds me of what is happening out there. It makes me think of other high (maybe even junior high) school students who don’t have the privilege of attending a diverse and inclusive campus such as IMSA. What I’ve experienced is probably the bare minimum, so who knows all that they’re going through?

Then what can we do? A lot actually, but I’m not asking much. Just a bit more awareness, understanding, and compassion from all around. As students, it’s not like we can make a direct impact on the Chinese citizens — families being torn apart, trapped, and people dying — but sympathetic words go a long way. Will there ever be zero hate towards anyone? Probably not. But since that hate doesn’t concern us, show support and lift each other up. I don’t see hate speech defeating viruses; neither does encouragement, but one gives hope and the other doesn’t.