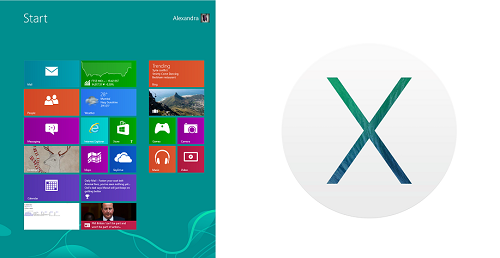 Ever since Steve Jobs and Bill Gates went their separate ways to create their respective brainchild companies, fanboys of both companies have been warring with each other. While Apple and Microsoft certainly trace their origins to different arenas, the two supercompanies are starting to converge in their business plans – an interesting change, no doubt.

Microsoft’s foundation has always been in software and services. As a company with a history of extremely popular operating systems, it comes as no surprise that Microsoft has enjoyed a great deal of business with both the consumer and enterprise sectors of the market. Microsoft has traditionally not dabbled in the hardware market, instead preferring to rely on Original Equipment Manufacturers (OEMs) to create Windows devices.

Apple, on the other hand, has always focused on how to sustain itself; they built their own hardware and programmed their own software, borrowing a significant portion of their underlying code from Unix. They manufactured expensive, iconic machines such as the Macintosh Classic and the Powerbook 100. Regardless of their business angle, Apple failed to garner as much of a user base as Microsoft, since they were always undercut by their rival’s aggressive pricing. Apple would only start to garner a lot of attention after the release of the iPod.

Today, both Microsoft and Apple seem to be mimicking each other’s business plans. Microsoft has started to transition to a devices and services company, not too dissimilar from Apple’s business model from the 80s and 90s. Since 2012’s Build Developer Conference, Microsoft has committed itself to building devices such as the Surface and Surface Pro.  To further cement their stance as a hardware company, Microsoft has also released various accessories that complement their Surface line of Windows tablets such as the Touch and Type Covers. Though Microsoft will continue to release software such as Windows 8.1 and the Office Suite, they look forward to a future where they will develop “new form factors that have increasingly natural ways to use them”.

As Microsoft transitions into its hardware role, Apple seems to be countering them on the software front. The recently announced OS X Mavericks is unique and different in a number of ways. Not only is it offering a slew of features, but it is also Apple’s first completely free operating system for most current Mac users. Compared to Windows’ asking price of $120 for non-Windows 8 users, OS X seems to be the significantly more attractive option for the platform agnostic buyer. In addition, Apple has also combated Microsoft’s well-established and powerful Office Suite with its own set of professional apps such as Pages and Keynote. As Apple continues to develop and fine-tune their software ecosystems, they find themselves moving in the exact opposite direction of Microsoft’s new business strategy.

It will certainly be interesting to see the new fields that Microsoft and Apple propel themselves into as they transition into new business strategies. Amidst Steve Ballmer’s exit as CEO of Microsoft and Doug Field’s departure from Apple, the two companies may start to experience the fiercest competition between them yet as they embark on their quest to become the most influential, forward thinking company.

Tales and Tips with Dr. Skinner

Be the first to comment on "Microsoft vs. Apple: The Big Two"