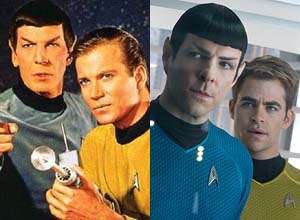 After about a century of enjoying visual media such as film, more and more advancements and changes have come to cinematography, camera skills, and special effects. For the past decade, American directors have been “rebooting” many of the most memorable and beloved American films and television series, with the hope that modern day filming technology can assist in the creation of a film more realistic and sincere for new audiences. Although mostly popular with superhero films, reboots are a popular choice for sci-fi movies, fantasy novels, and musicals.

Most reboots are a financial success, and in some cases may even perform just as well as the original series. The reboot of the popular sci-fi series Star Trek has done very well in particular. The original film, Star Trek: the Motion Picture, grossed the most out of any Star Trek film, grossing about $439,657,000*. None of the original series’ sequels performed as well as the reboot titled Star Trek which was released in 2009. The reboot and its sequel Into Darkness did extremely well at the box office, grossing $410,363,995 and $332,450,586 respectively. The success of the new films also renewed interest in the franchise, another hallmark of good reboots.

Not only did the reboot perform just as well as the original film, but it also strengthened interest in the fandom. Once a fandom that appealed only to a group thought to be “geeky”, the Star Trek reboot satisfied old fans while entertaining a new, younger audience. The recent superhero film reboots have also been successful at targeting new and younger audiences, by telling stories based heavily on plot and characters rather than the elaborate intricacies of the comic-books. Reboots series such as the Batman and Spider-man comics gain new fans because they start from the origin stories. Audiences who are unfamiliar with the story are invited to learn about the story in a different point of view. In this way, reboots can be a good introduction to a great franchise or genre. The Les Miserables film adaptation from 2012 for example quickly became a fan favorite and a good leeway into musicals.  One of the most successful musicals of the 90s, younger audiences before the film adaptation were probably unfamiliar with musicals. Reboots are a great way to regain interest in certain series and genres.

Film reboots are popular for many people involved in the cinema. Companies profit from renewed interest in the series, and end up popularizing the fandom once again. The reboots cater to almost any audience, and are great introductions to some antiquated, older series. Film reboots ensure that beloved series stay memorable in our hearts.

*all profits are adjusted for inflation

Be the first to comment on "Series Reboots and their Success"