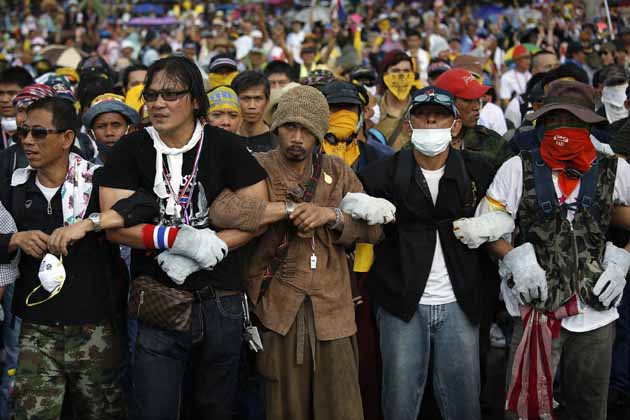 On December 1st, the head of the anti-government protest organization in Thailand required Yingluck Shinawatra, the nation’s prime minister, to resign from her position. Suthep Thaugsuban, the protest leader, was a former deputy prime minister in the previous Thai administration. His main goal now is to replace Yingluck’s government for the sake of the citizens of Thailand. To accomplish this, he gave Yingluck 48 hours to return power to the Thai people.

Furthermore, the protesters in Thailand performed various attempts to overturn their government. In fact, the protesters tried to violently approach the government headquarters in search of Yingluck. As a result, the police launched tear gas to disperse the crowd.  However, the prime minister was not at the police club compound, another location of protest. Even so, the protesters were still dressed with handkerchiefs to protect from a potential tear gas response from police. They persistently threw rocks across the fence that circles Government House. In return, the police, yet again, released tear gas, causing the protesters to disperse. At last, more agitated civilians returned to throw rocks at the building until dark.

In addition, on this past Saturday, 3 people were killed while 60 were wounded during the battle between the protesters and the supporters of Yingluck.  This conflict stemmed from the police filing an arrest warrant against Suthep, the protest leader.  More violent attacks took place throughout last week. Consistently, the protesters  rioted and made speeches against government authorities.

These protests are a response to a government-backed amnesty bill that could have caused Thaksin, a businessman turned politician, to be pardoned and returned home. If the bill does not get passed, then Thaksin is risking a two year prison sentence.  However, Thailand’s government rejected the bill and caused the community to react in a very aggressive, consequential manner.

Be the first to comment on "Anti-Government Protest in Thailand: Drive for Prime Minister to Resign"