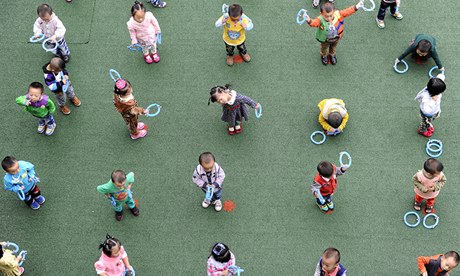 According to the International Business Times, an estimated 3 million more Chinese babies will be born every year, thanks to the new major exemption made in the nation’s one-child policy. The legislation  is supposed to go into full swing at the beginning of 2015. According to state news agency Xinhua, the new law will relieve the tension on Chinese families that has been in place since 1978. It will allow couples to have a second child if either parent is an only child in his/her immediate family. Currently, however, both parents must be sole children to be eligible for a second child, or they must be registered as members of one of China’s 55 official ethnic minority groups.

The push for reforms in China’s population control policies came as a direct result of recent federal research studies, which pointed to a drastically aging Chinese population. In fact, according to statistics provided by the Chinese Central News Agency, the number of people aged 65 and above is poised to comprise over 29% of China’s total population by 2050.

The rapidly aging population has also pointed to potential labor shortages in the near future, as the one-child policy has essentially increased the rate in which people leave the workforce, and decreased the rate in which people enter it. China’s strict policy has long kept the numbers of the newer generations in check, forcing many pregnant women into abortions and thereby preventing an additional 400 million births in the world’s most populous country of 1.3 billion.

The new policy will not completely ease the burden of the one-child policy, but rather it is part of a slow process, considered by many as a step in the right direction for China’s future.

How to Gain Weight over Thanksgiving

Clash of the Halls in Review, Day 2