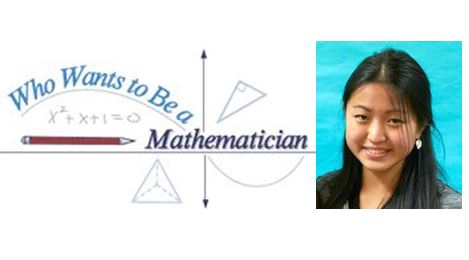 On Thursday, January 16, Emily Mu (’15) competed at the 2014 national Who Wants to Be a Mathematician contest. She was one of ten national contestants, and, as several IMSA students noted as they tuned into the live streaming, the only female contestant.

The competition was held in Baltimore, Maryland. Much to the delight of many IMSA students, the competition was streamed live at 8:30AM on Thursday morning. In particular, math teacher Mr. Stalmack put teaching on hold for a few minutes to project the live competition for his statistics class to enjoy.

Emily’s profile as seen on the page. Perhaps her training as a martial artist was integral to her developing her brain power.

Initially, Emily was one of over 2000 participants, but through rigorous exams and competitions at the regional and state level, she advanced to nationals. The trip was all-expense paid. This Friday morning, the winner of the competition was announced. More information on this year’s national contestants can be found through the American Mathematical Society’s official site.

Emily is an IMSA junior hailing from Naperville, IL. She actively participates on IMSA’s math team and also competes in a variety of non-IMSA sponsored contests each year. Does Emily want to be a mathematician? “[P]robably not,” she responds, though she mentions that she is keeping her options open. In her free time (“what free time?” she humorously adds), Emily enjoys pursuing hobbies such as reading. She also mentions that “…yes, I do do math in my free time–but probably a lot less than most people think.”

How to IMSA: Math Essays

How the rise of the “PSAT fandom” came to be