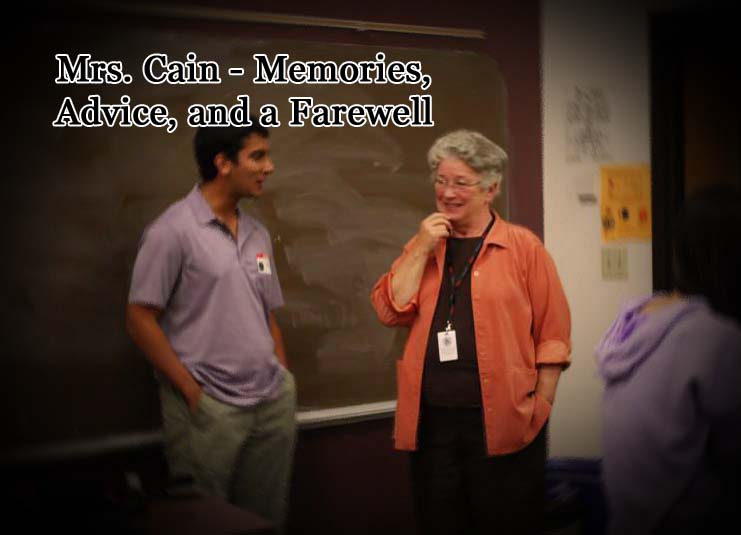 For 12 years, a certain English teacher has been talking and joking her way into her students’ hearts. But soon, that will unfortunately end when Mrs. Margaret Cain retires after this year.

In her last year at IMSA, Mrs. Cain taught Literary Explorations 1 and 3 as well as Modern Theater and Modern World Fiction. Outside of classes, she was the adviser for the school newspaper the Acronym and was involved in Crossfire teacher debates. She also spent her time taking students to the theater, a place she used as both entertainment and as a teaching tool.

Through many years of working at IMSA, Mrs. Cain has built up a long list of good memories. “My memory book is chock-full,” she states. “From my early days here when some crazy boy took my dare and did an interpretive dance of the history of playing cards, to whipping Ritzes onto the roof,  to watching the shyest kids open up like fireworks in Modern Theater – it’s all good.”

As the end of the year draws nearer, many students reminisce on their own memories with Ms. Cain. “I was shy and didn’t talk in her class,” Nathan Errampalli ’16 admits, thinking back to the beginning of LEI. “Then, she wrecked me a few times and posted on my [PowerSchool] comments to start speaking up in class. She taught me to be vocal and say what I want to say no matter who is there.” Shruthi Mothkur ’14 also reflected on her time with Mrs. Cain. “Whenever I went to her for help, she was always willing to have a discussion and provided valuable insight,”  she noted. “Her guidance helped push me to be a more confident and self sufficient student.” But Mrs. Cain didn’t only teach students how to become better students.

She also tried to help them become better people. “She always [criticized] me for not being a gentleman,” says Camden Ko ’16. “In a way, she kind of made me into the man I am today, and one with a girlfriend.”

With so many great experiences with students, it seems only natural that some of Mrs. Cain’s most vivid memories come from her students: the people she affirms she’ll miss the post.  “I will miss living my life surrounded by the Young and the Restless,” Mrs. Cain remarks.  “It keeps a person grounded to spend every day with the next generation.” She adds, “I can’t make them grow up faster, and I can’t slow them down.  Teenagers remind me that everything happens when it should, not when I want.”

As some sort of parting words, Mrs. Cain says,  “To IMSA colleagues: I salute you. To IMSA admin: In general, leave us alone. To IMSA students: relax.” Wise words from a wise English teacher who, for over a decade, has made learning fun for those who were lucky enough to pass through her teaching domain.

Thank you, Mrs. Cain, for your service to the Acronym, the students and the entire IMSA community.

Be the first to comment on "Mrs. Cain – Memories, Advice and a Farewell"