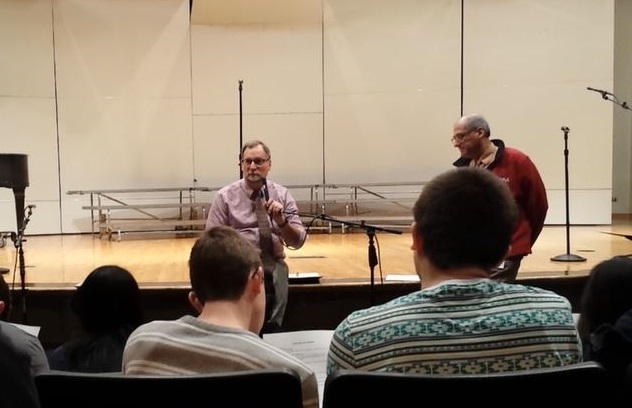 The official announcement on changes to IMSA’s school day schedules, attendance system, and more have drawn strong reactions from students. Despite the fact that they will be graduating soon, many IMSA seniors from the class of 2014 have expressed their discontent. Many feel that the changes are unfair for future classes of IMSA students who will not be able to have what they feel to be the same school experience and liberties.

“I know I couldn’t not say anything, even if we’re not going to be here,” senior Jennifer Hoelzer, who was very vocal about the impending changes, writes to the Acronym. “This place will go to hell if they do this… It’s going to be a super stressful magnet school that you live at. Not special at all.”

One senior writes to the Acronym that, admittedly, “in two years, none of the students will know anything other than the new system.” Just as students had initially protested the implementation of internet shutoff, these changes may not be of any interest a couple years down the line. However, this senior believes that these changes may have a greater impact. She mentions that she sees online posts from the IMSA alumni group and that “no one is pleased”. While she understands why there is upset over the freedom of future students, she also worries that this could be an issue for IMSA alumni relations. They “may be less likely to fund IMSA if they feel it isn’t the same great place they went to.”

Indeed, as one recently graduated alumnus from the Class of 2013 writes that “IMSA is not a normal high school nor should it be one. But if you think about it, that’s what it’s becoming.” Others have voiced their similar concerns on the changes.

While many students have taken to openly expressing their concerns, there are those who remain quiet. Among them, some indicate that they feel fairly neutral while others cite their desire to avoid the often heated discussions. Senior Nathan Huxtable shares his two cents, saying that, though he is has no strong opinions on the topic, he agrees that “a little more student input could have been involved”. He believes that the “main problem” and the “most difficult part” of the new policy will be “more people in the main building than places to hang out.” Nathan remains hopeful that “our students will be vocal enough to the point where there will be amendments made.”

Meanwhile, IMSA Student Council attempts to soften the blow of students’ reactions by encouraging students to send comments, concerns, and questions to their Online Submissions Box. On Monday between 8-10PM in the Math Study Area, representatives of Student Council will also be holding an “open house format” informational session to answer student questions.

Menstrual Inequity is a Crisis