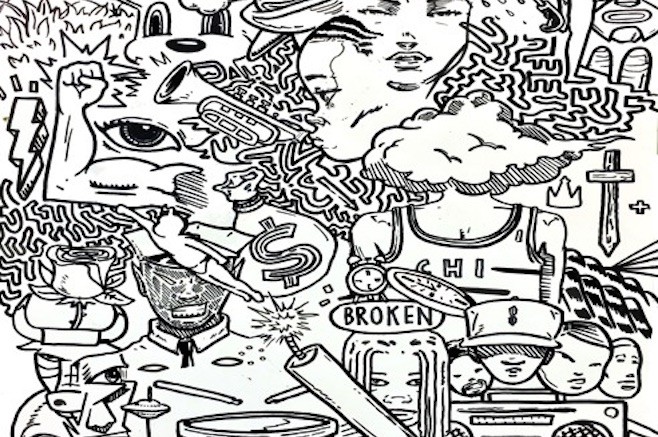 In December of 2015, Taylor Bennett shook off the ties to his older brother Chance the Rapper and spread his own wings by releasing his debut full-length album Broad Shoulders. The question on everybody’s mind was: could Bennett stand on his own in the shadow of his brother’s career?

For those who don’t follow hip-hop, in the city of Chicago and throughout the hip-hop world, Chance the Rapper (Chancellor Bennett) has become something of a household name. Since his start in 2012 writing rap lyrics for his first mixtape while on a 10-day suspension from high school, he’s taken the scene by storm. Chance made waves with his album Acid Rap that went diamond in 2013, and he went on to make headline appearances at Pitchfork, Lollapalooza, making guest appearances with artists like Madonna, Kanye West, and Justin Bieber, as well as penning lines for a new project called The Social Experiment that released the critically acclaimed album Surf in mid-2015.

Suffice it to say, Taylor Bennett has the whole scene watching in anticipation to follow his brother’s extraordinary reputation. But this album isn’t about Chance at all – Taylor took the reins on this project and steered it in his own direction completely. With Broad Shoulders, Taylor paints a picture of his life as a teenager growing up in the south side of Chicago, and all the growing pains that come with.

Taylor brought friends and family together to appear with hooks, background vocals, and verses on each of his tracks. He features several artists who are even more famous than himself, such as King Louie, Donnie Trumpet, Joey Purp, and Jordan Bratton; even his own brother, Chance the Rapper, makes an appearance on the last track Broad Shoulders.

Working with the Detroit-centered producer Ludlow, Taylor’s goal was to create a full-length, sample-free album that stood on its own. Many hip-hop artists nowadays use samples, or sound recordings, from other artists to make up the backing tracks that they rap over. This common practice has produced some of the hottest tracks in today’s scene. The Grammy winning To Pimp a Butterfly by Kendrick Lamar, for example, features several tracks that sample artists like Michael Jackson, Detroit Emeralds, and even 2pac. Taylor’s decision to make his album sample-free might show an even stronger desire to stand on his own, or that he simply wanted to stay away from any possible copyright issues that come along with sampling. But one thing’s for sure – Taylor and Ludlow managed to create some organic, modern-sounding, tight beats for this album.

The backing tracks for each song feature rapid and punchy percussion that mirrors Taylor’s flow well; he raps most of his verses more quickly than Chance fans would be used to. Each song is carefully produced to capture a wide range of emotions; there are several tracks like Wasting Time and Broad Shoulders that are more beautiful, slow, and melodic, and several tracks like Happy Place and Favorite Drink that are fast, upbeat, and fun.

The themes Taylor ties into his 37-minute album cover aspects of his adolescence, such as partying, relationships, and most importantly growing up. There’s a certain youthful carelessness that comes along with Taylor’s tracks, which portrays these common themes through a more focused lens and allows the listener a clear window into his life. About half the songs in the album focus on a girl and the different aspects of a relationship from Taylor’s lifestyle. In fact, a good portion of the album comes across like a kind of love story: he meets a girl at a party in Happy Place, begins to develop more serious feelings in Wasting Time, fights and breaks up with her in Cake, comes across her again in How You Been Lately, and the track Dancing in the Rain is sort of a beautiful, nostalgic ballad to her about putting aside all the things they fought about and remembering what made them fall in love in the first place – while dancing in the rain: “Baby / Can’t we / Drop our worries and dance in the rain.” It would seem that Taylor’s perspective on life is much more laid back than other hip-hop artists. He just wants to have fun and make music, and listeners will really get that vibe when they listen to his tracks.

The key theme of Taylor’s debut album seems to be growing up. In the final track, Broad Shoulders, Taylor and his brother trade verses about the fleetingness of time and the importance of passing on wisdom. In the hook, Taylor says “Teach what you learn, speak what you heard / Hear what you’re told” to emphasize the weight of criticism and advice given to him in his life, as it will be the same advice he passes on to those he teaches. This song is really about Taylor and Chance’s family, their parents, and even Chance’s new baby daughter. Nothing lasts forever: “Watch it get old, it only gets old.” Chance’s verse covers a similar thought that Taylor pointed out: “Head on his shoulders ain’t his own … / Who forced the hand to make the clone? / Who stands in line to take the throne?” Much like Taylor was saying, the son eventually becomes the father whether he likes it or not. It’s just a matter of what you teach, what you show, that makes the difference.

Taylor Bennett set out to forge a name for himself in the hip-hop community. He wanted to become his own artist separate from Chance. He touched on this in an interview with The Rolling Stone:

“My thing with my brother is that he always wanted me to work on myself and create my own name before we got to work together. He always knew that I was great enough to get a fanbase and sell out shows and get a lot of views.” (http://www.rollingstone.com/music/news/hear-chance-the-rapper-join-brother-taylor-bennett-on-broad-shoulders-20151119)

With this goal in mind, Taylor has created an admirable album with his own flair. It highlights many themes that are important to him through eloquent, skillful verses accompanied by strong organic backing tracks. It’s likely that I never would have heard of this album if it wasn’t for Chance, but in retrospect, I’m glad this gifted rapper was given a jump start in the hip-hop community. It only goes to show how much talent there is out there, just waiting to be discovered.

You can find Taylor Bennett’s SoundCloud, including Broad Shoulders, here.

Music Spotlight: Of Monsters and Men

Be the first to comment on "Family Matters in Hip-Hop: Reviewing Broad Shoulders by Taylor Bennett"