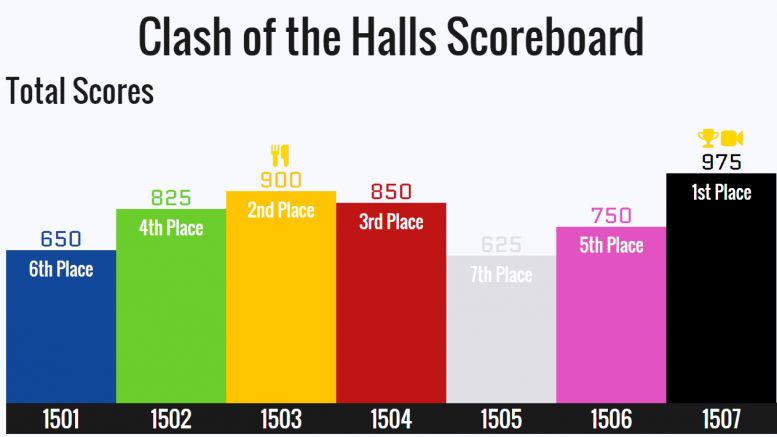 Months of preparation, hours of practice, and weeks of late nights have led up to this week, and it has finally begun. March 7th marked the beginning of Clash of the Halls 2016, a week full of displays of hall spirit and unity as each hall competes to be crowned the winner. Energy was high today from all halls as students competed in two different challenges in an effort to rack up points early.

While walking to class in the morning, you could see students dressed in khaki pants, polo shirts, and preppy patterns to fit the “fraternity and sorority” theme. Even though no points will be awarded for participating in dress-up themes or midday and night activities, a rule change first made last year, many students still joined in the festivities to kick off Clash week.

During midday, students gathered in the Old Cafe to watch the Opening Ceremony and compete in the Sodexo Cooking Competition. The ceremony began with a brief introduction by Student Council president Heidi Dong, CAB president Paul Nebres, and CAB member Srivarun Tummarakota, followed by a scientific demonstration by Dr. DeVol. By reacting magnesium hydroxide and hydrochloric acid, Dr. DeVol created a color-changing solution that featured the hall colors. Following the introduction, hall representatives channeled their inner chefs as they attempted to cook an appetizing dish in the cooking contest using food from Sodexo and the secret ingredient, Funyuns.

General comments regarding the event focused primarily on its length, as some thought it dragged on. One sophomore commented “It was really long, but it was still fun to watch.” A junior, who is more used to hyped Clash competitions said, “It was entertaining for the people who were participating but for everyone else it was a long process with poor visibility.”

By 7:15 pm, screams filled the auditorium as each hall sought to prove that they had the most hall spirit, as if the number of decibels of a hall chant was directly correlated with their point total. When the movies began, they played one after another, with barely a moment to cheer. However, they were still entertaining, and we all appreciated the instant reveal of the winning movie, 1507. Regarding the winners, junior Polina Bondarenko shared, “I thought that the way it was filmed and the effects and stunts were good, but the plot line was lacking and could have been improved.” Sophomore Sargam Panpaliya says she wishes 1503 would have won, because “the effects were good, the makeup was amazing… and Heidi Dong slayed.”

Later, students mingled and reflected on the day at the ice cream social, where they were served by alumni and CAB members. Sargam liked how “we could put aside the competition for awhile at the ice cream social and just chill with people from other halls,” and how fellow students “gave so many compliments to actors from the other halls’ movies!” Although it wasn’t a competition or “hyped,” the event combined the competitiveness of clash with the underlying mission of becoming closer as a campus.

The amount of excitement and participation I saw today has made me sure of one thing: this is going to be a great week. Get pumped, IMSA.

Day 1 Scores:
Taken from Student Council’s Clash of the Halls Scoreboard, seen in this article’s accompanying image. Check it out directly at https://sites.imsa.edu/studco/clash/.

The Rumors of Clash