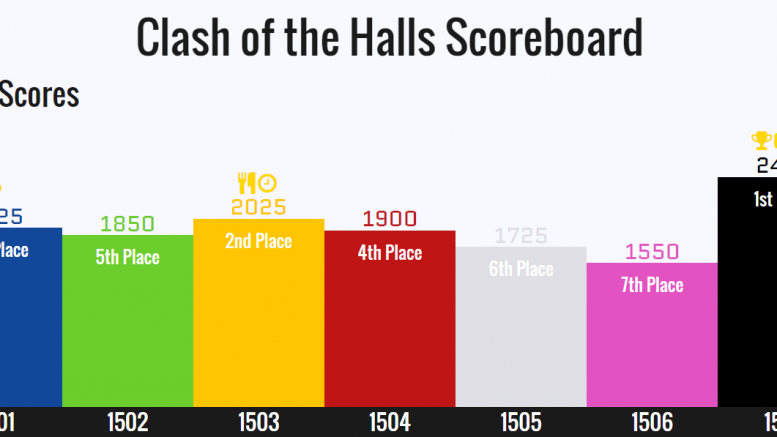 Even on an I-day, Clash events doggedly continue and for good reason. The scores after the first day two days of this year’s competition remained tantalizingly close, demanding a decisive competition. Although midday held no spectacle (as the majority of students were away at SIR or assisting with the annual MAO-hosted junior high math contest [JHMC]), the true attraction was held at 7:15 in the auditorium.

Before the event, students who remained on campus donned formal wear in accordance with the day’s “formal” theme. Although this effort would not yield points, it was still an admirable display of clash enthusiasm. Later that night, a brigade of students were lined up by IMSA’s Student Council, which did not allow students to immediately enter for the sake of better organization. In fact, the day before in the talent show, the halls who appeared early filled the seats, leaving no room for the later halls. Today therefore, each hall was given a 50 person quota which quickly filled, as the queue to enter extended a good 100 meters.

As each hall entered the auditorium, they roared their respective chants, the most resounding of which were “Bro Forever” from 04, “who are we 03” from 03, and “Vintage” from 05. Other mirthfully competitive chants occurred as well such as 04’s “Joe Forever” in light of Joe Mastrocola, the beloved RC of 04 who recently left IMSA. But this was only a response to 05’s  mantras “Belford” and “Ho-Ha 05,” also in tribute to an RC who left last year and their classic, old-time phrase respectively. 03 and 07 had their own exchange as the latter yelled “black” (their clash color) to 03’s “yellow.” A few brave souls from 05 were heard shouting white in the midst the exchange between 03 and 07 but were drowned out. 02 was not to be forgotten and pitched in a “GI Joe 2” to a couple screams to 01’s “Y 0 1 0,” a parody of YOLO. Finally the ladies from 06 joined with “0 So Sixy” every now and then.

But after all student zeal had settled in the seats of the auditorium, Student Council unveiled the first of five events in the night’s Game Show: the meter stick balancing task. Two representatives from each hall were called forth to the stage to participate. This challenge entailed one member placing their finger below the 55 cm mark while the other was on 45 cm. Each pair, as StudCo’s CAB members Naomi Nakajima and Mateuzk Cikowski demonstrated, was to begin with the flat stick at an angle above 90 degrees and then drop and raise the meter stick in unison as many times as they could in five minutes. This time of five minutes was consistent across all five challenges. However, each member’s fingers had to touch the ground before the ascent passed 90 degrees. First place would get six points, while seventh would receive 0. The hall with the most points at the end of the night would be declared winner. As a task mandating team cohesion, balance, strength, and perhaps a short stature, this meter stick challenge was a formidable beginning to the night of fun.

07’s team of Robert Lou and Leon “Fritz” Souweine shot up and down considerably faster than any other hall. After reaching a certain number they stopped, assuming they had won, but were encouraged by their hall mates to continue through the remaining time on the clock. Ultimately, 07 still won, with 05 finishing in a respectable second.

But the second event, involving hula hoops, required even more body dexterity. While one member of each hall spun a hoop on their arm, their partner from their hall was to hand them another. Such would continue until each arm held 3 hoops. Moreover, each person had a seven second grace period to stop their current motion, add a hoop, and restart. Hoops were added at 30 second intervals and last person spinning with most hoops would win. But the challenge stopped almost as soon as it had begun, proving to be quite difficult. All the halls dropped after the very first addition except 03’s representative Dawn Triche who reached the third hoop with one arm.

The competition continued to escalate as the next challenge required eight members from each of the seven halls. They were to throw all their shoes in a pit in the middle of the stage and a type of relay race was formulated. The first member of each hall was to find the shoes of the second only by description (members 2 through 8 could not help or watch their partner struggle). Once the shoes were found, they second member would don them and race to find the shoes of the third member. And this process would repeat until the eight member found the shoes of the first (much easier at this point since there were fewer shoes) and all members had them on their feet. 07 blasted off to a speedy start, but all other halls sustained a good pace. 05 unfortunately was impeded in its second leg as Kush Gupta was caught in a mix up with Nikhil Thota’s shoes. The task proved to be too demanding for all halls except 06, which won to resounding cheers.

The penultimate task surely required the most precision. Four members of each hall were called forth. In a series, the first member would pick up a small bean from a large pile in a bucket with chopsticks and pass it to their number two who continued down the line to the fourth member who dropped the bean in another container. Even making a single transition proved a challenge, as the CAB demonstrators, Mateusz and Naomi, had difficulty themselves. The staged lined up with students who had used chopsticks since childhood. Nevertheless, even the experts consistently dropped beans in their five minutes of allotted time. Eventually, 03 secured its second first place win of the night with a whopping 60 beans transferred.

The scoreboard going into the final event put all halls but 02, 03, and 07 out of contention for first place because they could not catch up even with the max score of 6 points. Still, everyone exerted themselves to the fullest in the final challenge, which featured eight representatives of each hall on the stage. Four pairs would be formed and each pair would be joined at the calves by a red bandanna, although some players’ calves, like Jonah Goughner’s, were too big to be contained (so the ankle had to be wrapped instead). Then, each pair would walk while merged with the bandanna across a short distance with an egg on a spoon in hand. They would transfer the spoon and egg to a pair on the other side, remove their bandanna, tie it to the other pair’s legs, and let them take off. Such was repeated until all four pairs crossed. The first to finish was once again 03, with 05 and 07 close behind in an undisputed tie (each team received 5 points).

For every challenge, students developed their own game strategies such as kneeling instead of squatting for the meter stick; spinning the hula-hoops slowly; subtly sabotaging other teams by displacing their shoes; placing the bean on the chopsticks instead of grabbing it; or removing and placing the bandanna around each pair’s feet in place of untying and tying it each time. Moreover, IMSA’s Student Council deserves a lot of credit for their efforts, as they not only improved upon their Minute-to-Win-It game show of last year, but also officiated every single event to ensure fairness. Council supervisors ensured that students did not transfer the beans by hand or slyly cushion the egg and spoon with their other hand. StudCo members also waived participation, as they knew of the challenges beforehand which could give their halls an advantage. Although there was a brief protest about cheating, it proved to be a false alarm as all teams maintained integrity and their personal honor code. Paul Nebres also entertained the crowd with his rollercoaster pantomime and a classic “Uh-Oh! I spilled the beans!” clean up.

Ultimately, 03 emerged victorious in the game show, although 07 maintained its overall first place standing. Yet, all this excitement cannot even compare to the hype of Pep Rally tomorrow, with thousands of points still up for grabs. It is still anyone’s Clash.

Clash of the Halls: Competition or Catastrophe?

How to IMSA: Clash of the Responsibilities

Be the first to comment on "Clash Day 3: A Formal Game Show"