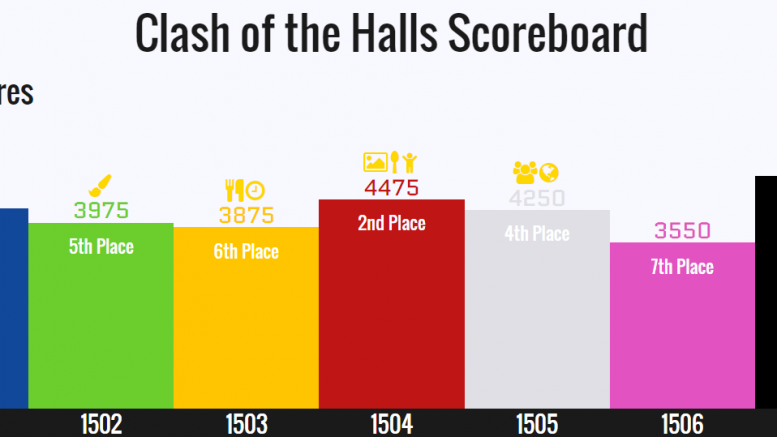 At last, the day has come! As StudCo rushes to get the auditorium ready, drill teams have their last practices, and students put on hall t-shirts and smear paint on their body, there’s an undeniable energy electrifying the fourth day of Clash.

The first Clash event of the day took place during midday, where murals, profile pictures, and t shirt designs were placed in the DNA hallway and Old Caf. Students and staff alike walked around and saw for themselves what students had been preparing for months. The crowd was a multicolored mass of bright blue, green, yellow, red, white, pink, and black as students gathered to take pictures and use face paint.

As school let out, the rush for pep rally began. In all of the halls, students geared up, tying bandanas, applying more face paint, rehearsing cheers, and more. As 6:30 drew closer, halls made their way down to the gym in vibrant congregations, shouting and cheering the entire way. Outside the gym, it was loud and hot. Among countless cheers and selfies, various alumni’s faces could be glimpsed as many reunions took place. Inside, StudCo and ISP hurried to put the final touches on everything- and finally, they opened the doors.

After each hall had found its seating on the bleachers, Camden Ko (’16) spoke to the crowd. “Thank you for coming to Clash of the Halls 2016!” he shouted, and was met to thunderous shouting and applause. He began with updating everyone on the results from earlier in the day: 1505 had won geocaching and t-shirt design, 1504 had won profile pictures, 1502 hall mural. 1507 was still leading overall.

Then began the obstacle course, a complex combination of materials and props. Each task was based on the seven hall themes. The crowd watched as 10 people from each hall army crawled across the gym floor, ran a 5-legged race, solved math problems and more as they raced to the finish. 07 took an early lead and powered through the entire time, finishing first and ultimately winning obstacle course.

Next was the eating contest, and everyone cheered excitedly as the 2 foods were revealed; an entire head of lettuce, and half of a watermelon. Everyone watched I awe as 2 brave students from each hall stuffed shreds of lettuce into their mouths, followed by 2 other students digging into the watermelon. 04 tore into their lettuce and watermelon, finishing first in the eating contest. It was quite a mess afterwards, and as people ran to prepare the next game, each hall broke out into their cheer.

Then, the senior game was announced. There were a lot of rules, as each team of 5 seniors was assigned roles, one person running around trying to retrieve balls, another instructed to guard a square taped on the floor from specifically colored balls all while blindfolded. After a quick practice round, the seniors tried to play for real. However, due to confusing rules and disagreements between players, after 2 botched rounds, the senior game was prematurely stopped. Though unfortunate, people were looking forward to the final event of Clash- drill team.

First, the StudCo team performed, representing variety of colors and halls. As people danced in the center, others ran around the gym, mimicking a plane or going swimming. At one point, someone picked up alumnus and former StudCo president Vinesh Kannan (’15) and carried him around the gym. CAB director Paul Nebres (’16) ran around and did his signature crowd wave. Finally, StudCo held up a sign that read theman@imsa.edu, to honor retiring and beloved director of student life Keith McIntosh. Keith walked out to the center of the gym to a standing ovation, as StudCo president Heidi Dong (’16) introduced him. “StudCo drill may been rough this year,” she said, “but StudCo in general would have been a lot rougher if we didn’t have Keith.” Keith gave a short but impactful speech, highlighting his love for the IMSA community, reflecting on the cooperation and competition Clash and the IMSA student body had come to represent.

Each drill performance was incredibly well-choreographed and well-executed; some notable moments were when Yoanna Ivanova (’17) was thrown up into the air during 01’s drill, when everyone on 1502 ended their performance with a unique tapping routine, and 4 students during 05’s drill literally became a human wheel and rolled around as ‘They See Me Rolling” blasted.

Finally, as points were being tallied up, dance team performed in front of an excited but anxious crowd. Camden Ko and Franklin Yee (’16) then thanked everyone who had helped Clash run and gave special thanks to ISP.

Drill scores were announced with a groundbreaking two-time tie- one for third, between 1506 and 1502, and one for second, between 1504 and 1505. Finally, the total ranking for the week were announced- with 1507 coming out on top. Everyone rushed down from the bleachers and celebrated together, jumping and screaming and laughing. The end of Clash had arrived, bittersweet for many.

Although it can seem each hall is pitted against each other during Clash week,  that final scene with everyone on the gym floor gave a reminder that in the end, Clash isn’t about each individual hall trying to be the best; it’s about IMSA as a campus working incredibly hard to show pride in their school and their friends. Clash week is the product of months of hard work and tears and sweat, and the final result was phenomenal. Everything people had worked for had paid off during pep rally, and it was a great end to an unforgettable week.

IN2 the Future: The Groundbreaking Ceremony