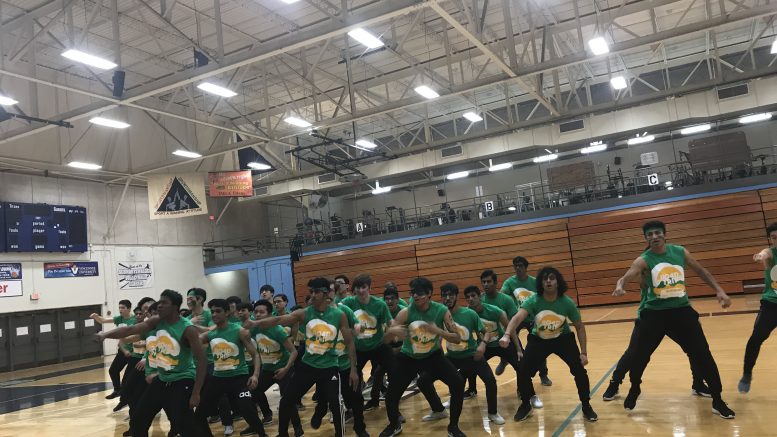 04 Drill during one of their formations.

In the morning of Clash Day 4, a sea of students proudly representing their hall t-shirts streamed into school. Each t-shirt emulated the hall’s theme, as well as the hall’s color, a symbol of the unity that the week brings to each residential hall.

The midday event for the day, face-painting, helped students get excited for the night’s pep rally, as they painted their hall’s colors on their face in a variety of designs.

The main event, pep rally, consisted of three main events: obstacle course, senior game, and drill. Obstacle course was first, including obstacles such as balancing a basketball on three fingers, stepping through hula hoops, solving a riddle, and more. 02 came in first, with Charlotte Giff (’19) sprinting to the finish line as her hall cheered her on.

Next was senior game, where four seniors from each hall competed. In the first round, the seniors had to pick up plastic balls and rubber ducks with their elbows. The rounds got progressively harder, ultimately culminating in the seniors having to keep the balls between their legs as they bunny hopped to a hula hoop, where the balls were released. 04 came in first with the seniors barely edging out 02.

After senior game was drill, where each hall showed off the culmination of weeks of grueling practices. Each hall also managed to culminate their theme into their dance: 05, for example, traveled back in time to their clash theme from the year before, representative of their theme, Back to the Fuschia.

After each hall performed, CAB and Studco performed their own drill, followed by a CD drill and an RC drill.

Ultimately, 07 placed first in their drill, which not only incorporated their hall’s theme, but also the t-shirts of every single other hall.

At the end of the night, the final totals for clash were announced. They are as follows:

Congrats to 05 for a well-deserved win, and great job to all of the other halls!

Be the first to comment on "Clash of the Halls: Day 4"