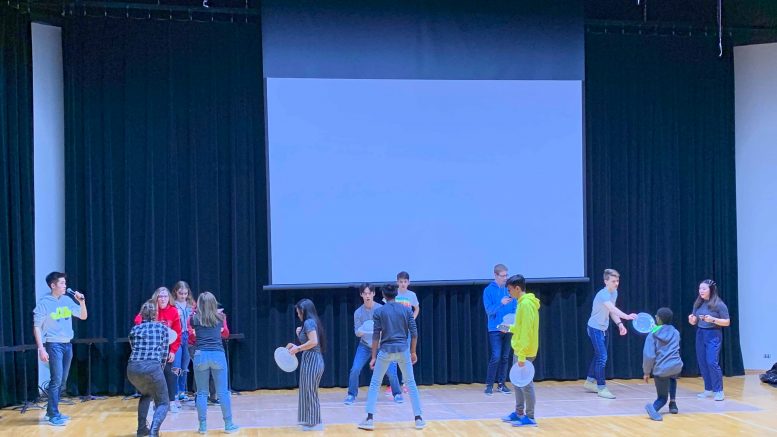 Day 3 of Clash of the Halls kicked off with a Wacky Wednesday dress-up day, plus hall mural, profile picture, and T-shirt judging in the afternoon.

Each of the seven residence halls painted a mural, signed by the residents of that hall. Interestingly, 1507’s mural last year was the only mural to feature references to the other halls’ themes (in the form of posters on the walls of a convenience store). This year, every hall opted to include the other six halls’ colors and themes in their own murals.

1501 (theme of Ultravi01et) depicted a night club scene, complete with LED lights across the top border.

1502 (Camel02) showed a knight dressed in blue armor pulling the famed sword from the stone, with six other knights dressed in the colors of the six other halls looking on.

1503 (Noir3) was arguably the most popular of all, showing a figure (“spy”) dressed in black walking down an alleyway, complete with WANTED posters for characters based on the themes of the other six halls.

1504 (R04d Trip) painted a literal road trip. “THE ROAD” was written in large block letters at the top, with each letter shaded in with another hall’s color and theme.

1505 (Back to the Fu5chia) showed pink lightning surrounding a DeLorean time machine.

1507 (7th Avenue) showed a man playing the trumpet with a USA flag in the background. Six of the stars in the flag were painted in purple, blue, black, green, pink, and red for the other six halls. Many students assumed that the trumpet-player depicted was Barack Obama, prompting many 07 residents to change their Clash profile pictures to photos of the former president instead.

The evening game show featured as creative events as ever. This year’s games included throwing glow-in-the-dark bracelets onto a partner’s wrist, naming jazz instruments, walking with spaghetti sticks stuck through holes in Diet Coke bottles, throwing cheese balls at a person wearing a shower cap with shaving cream, doing ten squats with a ruler balanced on the index finger, and throwing a fedora onto a partner’s head from a distance.