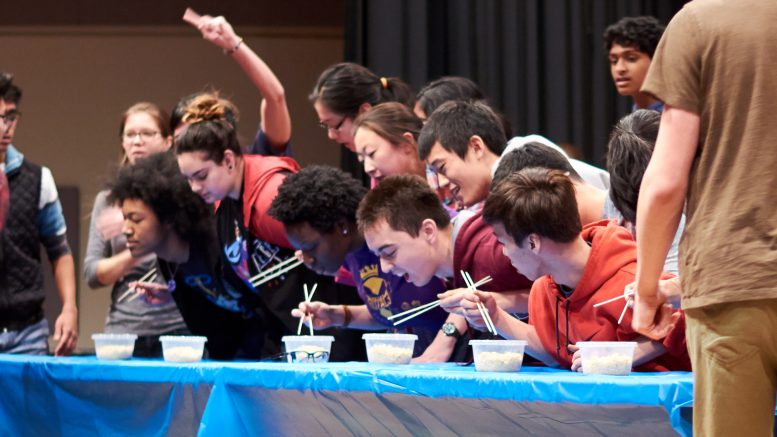 Despite complaints of unfair judging during Monday’s and Tuesday’s events, the Clash spirit raged on Wednesday, the third day of clash.

Most students spent the day at SIR, helping out with Mu Alpha Theta’s annual Junior High Math Contest (JHMC), or catching up on sleep lost to Clash planning and practices, so the Wacky Wednesday dress-up theme saw a sparse number of participants. However, those that did participate, such as Dr. Scarano, looked truly “wacky.”

The event began with an introduction by CAB director and emcee Mateusz Cikowski, who explained the rules of the event. He explained that the Game Show would be comprised of four events, including a trivia competition with a donut-eating aspect, ramen-eating contest, gummy-bear finding contest, and a set of timed tasks.

Responses to the event were not all positive: An anonymous IMSA student complained, “It was lowkey a sexist event, because there were two eating competitions out of four contests, which makes it harder for girls’ halls to win.” In addition, complaints circulated about certain halls’ strategies in the donut-eating contest, and students noted the lower-than-usual student attendance, perhaps due to other commitments or lower interest levels.

Thursday, students can look forward to face painting, hall mural presentation, t-shirt and profile picture design judging, and of course, the pep rally. At the pep rally, students will compete in the obstacle course, senior game, eating contest, and drill– and, as upperclassmen remember from last year’s clash, a hall’s performance in these 4 critical events can bring a losing hall into the lead or drop a hall from the top to the bottom.