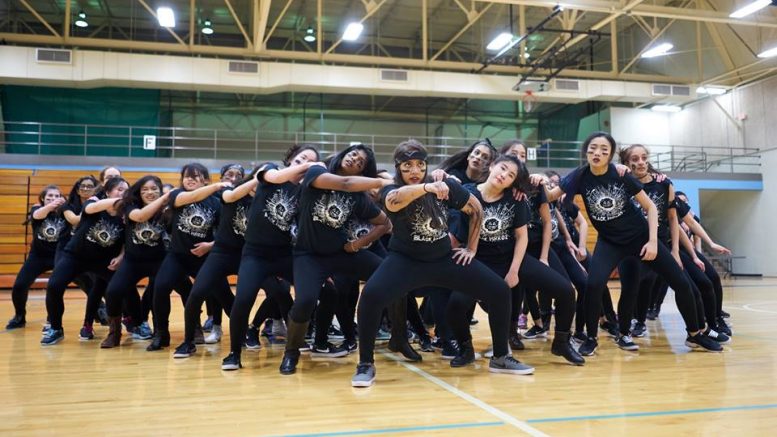 Picture of 02 Drill by Andriy Sheptunov

At midday, hall murals, profile picture designs, and t-shirt designs were presented in the Old Caf and judged by faculty members. While the individual events were not worth as much as other days’ competitions (hall mural was 500 points while the other two events were 400 points), one anonymous student said, “There’s 1200 points going out right now and that’s a game changer heading into pep rally.” 1502 won hall mural, 1503 won profile pictures, and 1504 won best t-shirt design. CAB  also set up a face-painting table during midday, so students could arrive prepped for the evening pep rally with war paint, battle lines, and swirling dots in their hall’s color.

Right after school, students from all halls started getting ready for pep rally. In 1503, Allison Bai (’17) filmed footage for ISP and said, “It’s crazy how much effort everyone has put into this year’s Clash. I’m not sure if I’m just feeling the effect because I’m a senior, but I truly appreciate the dedication and love coming from each individual on this campus.”

At 6:30 p.m., 1501 was the first hall to enter the gymnasium and all other halls followed, marking the start of Clash’s biggest and most hyped event: pep rally. After the scores from midday were announced, CAB member Carson Goffinet (’16) explained each step in the 12-person obstacle course which included events that represented each hall– including applying makeup on dolls (1503), running with a cherry blossom branch (1507), and army crawling through a “danger-zone” (1506). In the end, 1506 received first place and 1505 received second place; however, both halls received the same amount of points as 2nd place and 3rd place, respectively, because students ran onto the gym floor to celebrate when the event was still running, breaking the rules aforementioned.

The next event of pep rally was an eating contest, followed by the senior game. Four seniors were sent from each hall to participate in a “quiet game” that involved picking up balls across the gym floor and putting them in boxes, but of course with a huge twist. Three members were blindfolded and could not talk, and one of the three held a target box while the others moved two pieces of cardboard. The other member was the only one who could talk and directed the rest to place the cardboard in front of them, as this was the only thing the member could step on to pick up the balls.  This year’s senior game was very different than the past. One anonymous source explained that, “I like this year’s game because it was made fairly for all sexes. In the past, games measured your physical ability, but obviously males – for example – have an advantage over females. This year’s game was about collaboration and more intellectual if anything.”

The final event to take place was Drill; drill is a dance performed by each hall. Each dance lasted around five minutes, and most halls started prepping for drill around a month before clash week because it is worth a whopping 1000 points for first place, and is the defining event of clash. The orders were randomized, and the dances started with 1501 and ended with 1502. Throughout the middle, Studco dance, CD dance, RC dance, and Dance team performances all occurred too. 1504 won first place in drill, and this was the crucial event which surged them to the top of the scoreboards and thereby allowed them to win our 2017 Clash of the Halls. Many exclaimed that 1504’s drill was phenomenal, and while they have won first place in drill in the past years, this year’s drill surpassed even those.

Clash of the halls ended with a series of thanks to Security, ISP members, Studco and CAB, judges, and everyone involved. The best part was watching all the students run from the bleachers after 04’s victory was announced and congregate in a giant group hug. It took a while to get everyone out of the auditorium, but most celebrations lasted until midnight in the halls. Clash of the Halls brings the whole community together, and is one of the best experiences IMSA students have.

Clash of the Halls scoreboard: https://script.google.com/macros/s/AKfycbwDtqS6jsh-JtDjxvHjHhQ5Ahkk4CDjRDTbselhlxkAcu1jZiMI/exec

CotH: Thoughts from Teachers and RCs

Be the first to comment on "Clash of the Halls: Day 4"