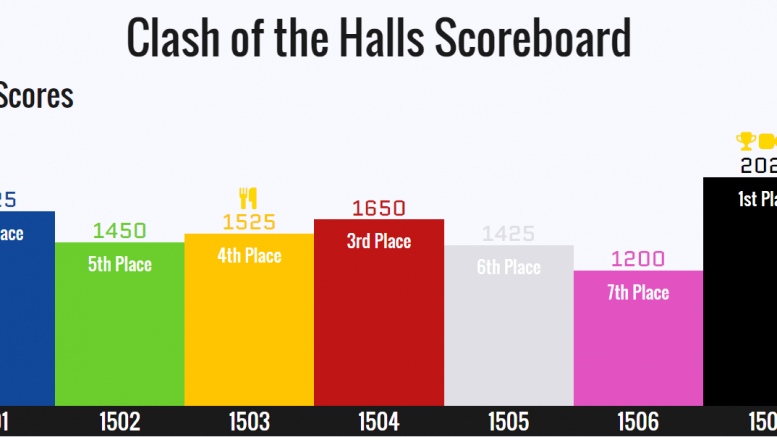 Day two of Clash was filled with unexpected surprises. Clash has hit full swing now, and the excitement is only escalating. A week claimed to be one of the best in the schoolyear, Clash of the Halls provides an opportunity for students in residential halls to unite and prove themselves over their peers, but it is not all about winning.

At midday, students gathered in the Old Café to participate in Think Tank. Each hall worked together to solve a set of academic questions. These questions ranged from writing a fairytale in multiple languages to performing basic stoichiometry, providing a challenge to all students, regardless of their grade, ability, or subject specialty.

In a surprising finish, students learned during announcements at the evening’s Talent Show that 1501 claimed first place in Think Tank. This history-making year was also the first in which all halls got every single Think Tank question right. At once, cheers erupted through 1501—and the Talent Show had not even started yet.

To start the show off, 1504 took the stage with a heavy metal opening. Amid the flashing red lights, three electric guitars growled as the drum set boomed. But most striking of all, two 1504 students took out their trimmers and shaved their beards or hair off during the show. And to add a romantic twist, senior Julian asked Tea to go to prom—showing that even through competition, students in different halls still grow closer.

1506 told the story of a girl trying to find her place at IMSA. She met the math team members that rap, the band geeks, and the dancers. In their finale, 1506 kicked a radio off the stage and performed their own rendition of “Jingle Bell Rock”: “06 Rock.”

Up next, 1505 started with a small harmonica part but progressed into a piano-drum performance. Highlights of the 1505 performance included singing and dancing. Although the dancers dropped a hat during a risky dance move, the show moved on in spectacular style.

Using their theme of GI J0e-2, 1502’s show began with a scene of recruit training. The drill sergeant was forced to leave, and of course, the students found opportunity to have fun. From solving a tetrahedral (not pyramidal, as judge Dr. Kiely, who gauged each performance with Mrs. Townsend, and former area coordinator Michelle Hoehn, pointed out) to roller skating to dancing, 1502 showed a diverse variety of talents. In a classic end, the drill sergeant returned, and though the students scrambled to appear obedient, the suspicious instructor spotted a pair of roller skates.

1503’s queen, Heidi Dong, oversaw the 03 show. It too contained singing and dancing, and a unique “Royal Rap.” Although technical difficulties prevented the music from playing correctly, 1503 courageously pushed onwards and finished their show, refusing to allow bad luck to ruin all of the hard work they put in preparing for the show.

Then came 1501. It was the story of couple stranded at sea and suddenly finding themselves in the mystical undersea world of Atlantis. With their own tour guide, the couple explored the culture of Atlantis through its songs, music, and dances. It adorably culminated with “Under the Sea,” where audience members of 1501 sat on the stage and blew bubbles.

Finally, came the 1507’s highly-anticipated performance. Formally dressed, they played original music and danced to it. There was a clarinet-saxophone feature, fighting, and even a unicycle. But perhaps most unique, an eerie shadow-man loomed in the background, who ominously declared that they were being infiltrated by the “Black Hand” and that they were being controlled like puppets. Dramatically, other 1507 students lined up and marched in robotic style towards the stage. 1507 even received a standing ovation from the audience.

Every single hall brought something new to this Talent Show. It truly was unforgettable. With their breathtaking performance, the winner was 1507, but many are talking about 1501, which claimed second place. 1501 has arisen as an underdog, to IMSA’s surprise. After the Talent Show, a 1501 senior claimed, “Atlant1s is rising,” though in truth, the entire campus has reason to celebrate the second day of Clash.

Check out the StudCo clash website (https://sites.imsa.edu/studco/clash/) for updates and specifics on scores.

IN2 the Future: The Groundbreaking Ceremony