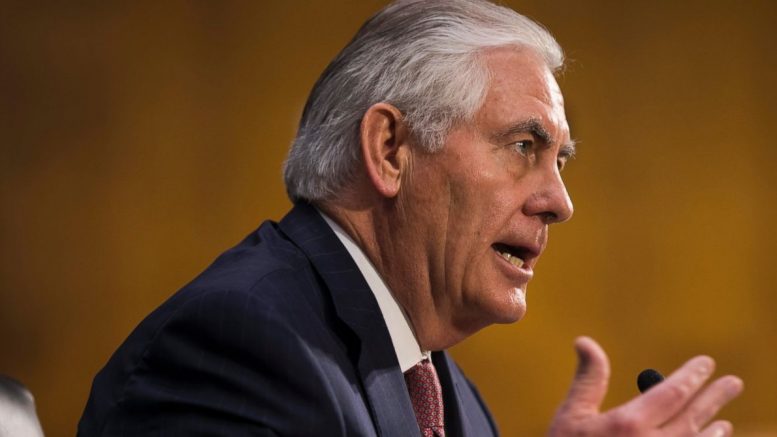 “He’s much more than a business executive; he’s a world class player,” Trump had said in a Fox News Sunday interview last December. “He’s in charge of an oil company that’s pretty much double the size of his next nearest competitor. It’s been a company that has been unbelievably managed, and to me, a great advantage is he knows many of the players, and he knows them well.”

The favored contender for the position originally seemed to be former New York mayor Rudy Giuliani, before he withdrew from the race for a Cabinet position in December (Giuliani is now enlisted to serve as an adviser for cybersecurity issues). Trump had also courted other seasoned political figures for the role of America’s top diplomat, including former CIA Director David Petraeus, Senator Bob Corker of Tennessee, former U.N. Ambassador John Bolton, and 2012 Republican presidential nominee Mitt Romney.

Current Cabinet choices have been facing resistance from the Democrats, though former Marine Corps Generals James Mattis and John Kelly were approved the evening of Trump’s inauguration. Tillerson’s close ties with Russia became a matter of close scrutiny before and during Senate hearings, with 2008 Republican presidential nominee John McCain calling it “a matter of concern to me that he has such a close personal relationship with Vladimir Putin” on CBS‘s Face the Nation in December.

Republican presidential primary candidate Marco Rubio was especially critical of the oil executive throughout, warning that “‘a friend of Vladimir’ is not an attribute I am hoping for” on Twitter last year, and then staunchly pressing Tillerson about Russian military actions in Syria during the Senate hearings, asking “Is Vladimir Putin a war criminal?”

Nevertheless, Republican Senators Lindsey Graham of South Carolina and John McCain of Arizona both confirmed their votes for Mr. Tillerson yesterday. Rubio declared 6 hours ago on Facebook that he would support Tillerson in the confirmation vote today.

“Given the uncertainty that exists both at home and abroad about the direction of our foreign policy, it would be against our national interests to have this confirmation unnecessarily delayed or embroiled in controversy,” read his statement. “Therefore, despite my reservations, I will support Mr. Tillerson’s nomination in committee and in the full Senate.”

As a key figure on the Senate Foreign Relations Committee, Rubio’s support is seen as critical to Tillerson’s nomination, with Republicans at a one-vote advantage on the panel and sparse Democratic support. Securing the panel’s approval paves the path to full Senate confirmation; in rare cases does the Senate confirm a nominee without votes from the Foreign Relations Committee.

And despite his reluctant support, Rubio warns that “upcoming appointments to critical posts in the Department of State are not entitled to and will not receive from me the same level of deference I have given this nomination.”

Tillerson will be confirmed today by the committee at 3:30 p.m. Central Time.