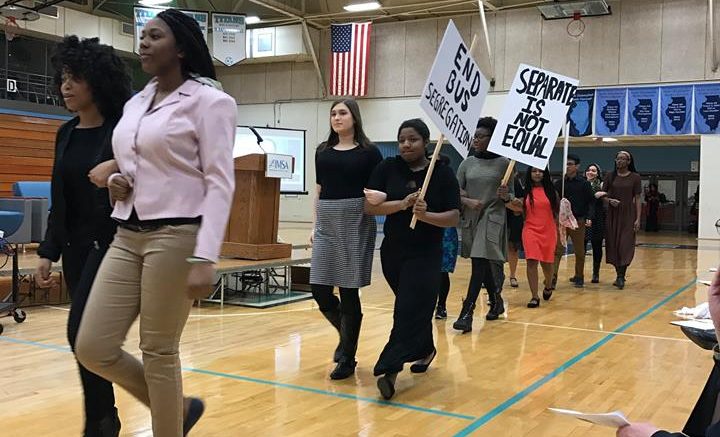 On Tuesday, January 17, IMSA hosted the 4th annual Dr. Martin Luther King, Jr. Assembly. The entire IMSA community was invited to the assembly to listen to Mod 21 perform, hear two guest speakers discuss the importance of this day, and to watch a skit presented by Peer Multicultural Educators (PME) and other students.

The assembly began with a rendition of “Lift Every Voice and Sing,” also known as the “Black National Anthem” from IMSA’s a capella group, Mod 21. Though first written as a poem for Lincoln’s birthday celebrations, it recently became popular as a song of celebration on MLK Day.

Guest speaker and IMSA alumnus Shawon Jackson (‘11) discussed the importance of continuing Dr. King’s legacy of social justice and service to others. Senior Nitya Talasila reflects on his speech as being passionate, inspiring, and unifying. AASA president Camryn Clanton (‘17) describes her takeaway from the speaker, saying “It’s important that I stay focused and follow my dreams, no matter what anyone says.”

However, others in the audience felt chagrined by the speakers’ words. An anonymous source expressed discontent with the messages that Jackson shared, saying “Jackson’s speech itself was unnecessary politically charged, as he brought in topics on the racism behind Trump’s election, instead of focusing on the role that Martin Luther King plays in society… Instead of attempting to bring our community together, his speech did quite the opposite, alienating any who disagree with him.” Many disagree, questioning why someone would expect a speaker to avoid controversial topics on a holiday with such a politically-charged nature.

Keynote speaker Clayton Muhammad, founder of the Boys II Men program and Director of Communications for Aurora, spoke about the importance of positive influences and living every minute to its full potential, something he attributed to Dr. Martin Luther King Jr.’s success. For Camryn Clanton, the most powerful part of Muhammad’s speech was when he “listed… people who had to overcome obstacles to get where they are today… I kind of thought if they can do it, I can too.”

Sandwiched between the two speakers was a skit written and presented by IMSA students. Written by Resident Counselor Abioye, headed by PME leaders Sona Fokum (‘18), Dhara Patel (‘17), and Carson Goffinet (‘18), and performed by PME members and volunteers, the skit portrayed Gandhi’s influence on Dr. King and the Civil Rights Movement. At the end of the skit, the symbolic baton representing the dream of equality was offered to the audience and the actors asked if we would carry on the dream. As such, the skit was a call to action and a reminder that the dreams of Dr. King are still alive– and it is up to this generation to pick up where he left off.

Shawon Jackson also participated in an open question-and-answer session in IN2 after school where he shared his perspectives on topics ranging from his career in management consulting with Deloitte to communicating with people who use offensive language.

A Recap of The 2019 MLK Day Celebration