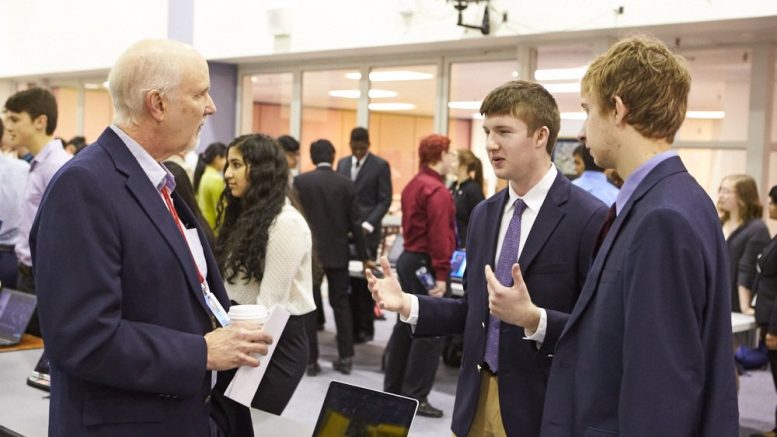 Students present their projects at SLX. Source: @IMSA_ on Twitter.

That’s the first piece of advice my co-facilitator, Noble Wulffraat (’18), gave our LEAD class this year.

During the 2016-2017 school year, I, like the average sophomore at my first ever LEAD class, took a seat with the general attitude that this was just taking up time better spent studying or sleeping. When my facilitators made me stand up to play an icebreaker, I rolled my eyes but still obliged. We started off with the evolution of leadership, which, like many of my peers, I thought was useless.

Then, something changed. Somewhere around the end of first semester, there was a module about Social Movements. At some point in this module, the discussion became heated and new facts emerged. Since then, all I wanted to do was learn more. I have to owe it to my facilitators, Rebecca Xun (’18) and Vainius Normantas (’17), for making my LEAD experience positive. I went on to apply to be a facilitator, and now, I still find myself in a classroom every Tuesday night from 8-9:30 p.m.

Although my LEAD experience was positive, numerous students have negative ones. It is something the LEAD team constantly works to improve, but that is also where we consistently struggle. After all, we, as student ourselves, understand that the average sophomore’s ideal Tuesday night does not involve being holed up in a classroom for an extra hour and a half while they learn about communication or public policy.

It is easy to pass LEAD off as useless, and it is easy to forget that it exists when you’re an upperclassman. Still, there are 34 juniors and seniors who meet three times a week to work on the program and facilitate modules. Making sophomores miserable haunts us, but we risk it for the few good discussions that we draw out from our classes of twenty five.

In the past few years, IMSA has shifted its viewpoint from a general goal of “advancing the human condition” to directly tackling the United Nations Sustainable Development Goals (UNSDGs), which we sometimes refer to as Grand Global Challenges (GGCs). Whether it be teaching the sophomore Methods in Scientific Inquiry (MSI) class or facilitating hack-a-thons, IMSA tries its best to get students thinking about these challenges. During that paradigm shift, LEAD was one of the first programs to evolve. Now, it serves as an outlet for students to think globally and figure out ways to tackle issues taking place in their communities and around the world.

Facilitators don’t know everything. Considering the wealth of knowledge in the world, we know close to nothing. In fact, the curriculum is the shallowest information we can cohesively present within the 90 minutes we get each Tuesday night. Going to LEAD will not transform anyone into a leader, but it might give them the skill set they need to become one. Better, it might give them the initiative to continue the conversations begun in class elsewhere on IMSA’s campus. As a sophomore, I never believed that a student-led class could possibly make me a leader, but it did make me look for new places to learn about social justice issues and the UNSDGs.

The 5 Kinds of LEAD Groups You’ll See at SLX

A Look at LEAD, A Sophomore’s Perspective