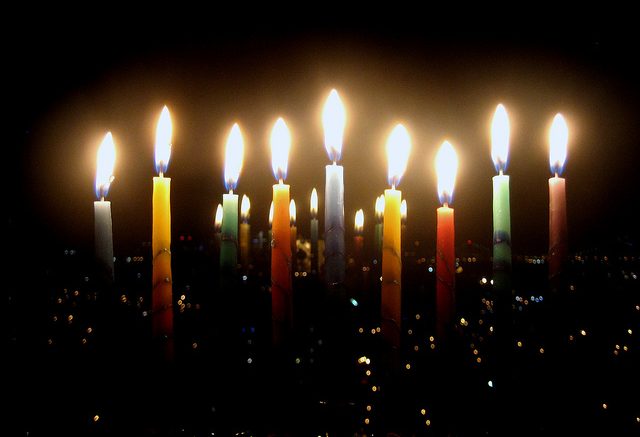 Chanukah (or Hanukkah, Chanuka, Hanukah, plus at least sixteen more variations), is the eight-day wintertime holiday celebrated by the Jewish religion. Chanukah does not have a large religious significance and is most likely as widely celebrated as it is so that Jewish children do not feel left out of the Christmas celebrations, hence the tradition of giving gifts for all eight nights. Even though the holiday has largely shed its religious origins, the story of Chanukah is one that celebrates the Jewish faith in the face of adversity through the miracle of the oil.

The Tale: The story goes that, in second century BC, the Jewish people were ruled by the Seleucids, who tried to force the Jews to convert to their Greek ways. Instead, the vastly outnumbered Jews, led by Judah the Maccabee, defeated the Greeks and reclaimed the Holy Temple. At this point, the temple was destroyed, desecrated with pig’s blood and adorned with idols, and the Jews could only find a single cruse of oil, enough to light the Menorah (a candelabrum with seven branches) for one day. Instead, the oil lasted for eight days. Thus, we celebrate Chanukah (or the festival of lights) for eight days.

Chanukah Songs: Even though Chanukah is a holiday with ancient roots, its songs and prayers are constantly being modernized. Here are a few popular Hanukkah songs with a modern twist:

The Chanukah Song by Adam Sandler

Maoz Tzur by The Maccabeats

Candlelight by The Maccabeats 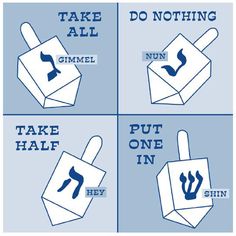 When the Jewish people were oppressed by the Seleucids, they were not allowed to partake in activities that were not Greek, which included learning to read the Torah. Instead, Jewish children used spinning tops called Sevivon (or Dreidel), which had Hebrew letters painted on each side, to learn inconspicuously. Now, when we celebrate Hanukkah, we use the Dreidel in a game involving gelt, or chocolate money.

Food: If you are familiar with the Jewish religion, then you know that Jewish holidays revolve around food, and Chanukah is no exception. 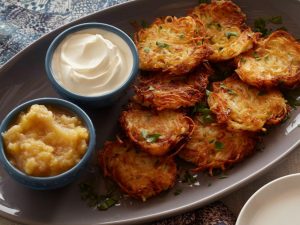 One of the staples of any Hanukkah celebration are latkes, thin, crispy, and fried potato pancakes that are generally served with either applesauce or sour cream (people are fiercely divided between which is better- personally, I am a sour cream fan). 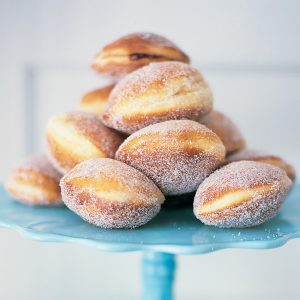 Another popular Hanukkah dish is sufganiyot or jelly-filled doughnuts. Even though these doughnuts can be found year round, Jewish bakeries put a little bit of magic into their dough that can’t be found at any Dunkin Donuts.

Thanks for reading my short guide to all things Chanukah! If you want to learn more, here is an in-depth look at the story from a more historical perspective. Happy reading, and happy holidays!

Be the first to comment on "Put on Your Yarmulke, it’s Time for Chanukah!"