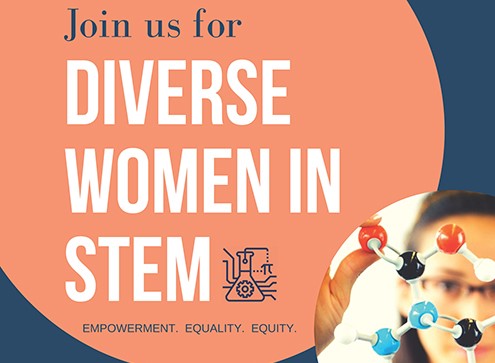 Co-sponsored by BELLAS, Girls IN2 STEM, and PME, the event was meant to “discuss the inquiries of women in STEM and how to create a climate of equality on IMSA campus.” Dr. Adrienne Coleman, Director of Equity and Inclusion, gave opening remarks and noted that the panel was part of “our diversity and inclusion plan,” before handing it off to Dr. Kelly Page, IMSA’s new research fellow, to moderate the discussion.

The rarity of women in STEM was an underlying theme throughout panelist responses.

“I think there’s also a lot more proving to be done in many ways; just like any underrepresented population in a particular field, in a particular area, people make assumptions about how you got there,” Hinterlong says. “So being an engineer, especially prior to coming here, people made assumptions like ‘you got that job because you are a girl, and that’s why they gave it to you, not because you are qualified to do that role.’”

Hinterlong also recounted stories of being passed up for a Masters program despite having the same qualifications as her male peer (who ultimately got the job), and spoke about the time when she was told by her supervisor to pick a project she could handle; he thought she was wasting her time getting this engineering degree – wouldn’t she be marrying and having children soon?

When asked about being assertive, however, Hart pointed out that being loud might not be necessary.

Heinz drew largely upon her experiences in the community at Benedictine, having taught there for almost fifteen years now and feeling assured in her role. “I went to a place where I knew that I could be me,” she said. “There were other women who were there before me who spoke out and still have respect.”

Nevertheless, she has still called out colleagues and filed Title IX complaints. “When something happens, it’s going to hurt, and this is where support networks help – you want to make sure you have people that stand up for you,” said Heinz.

“We need to change the culture of the workplaces,” she said. “You might want to look into these fields carefully – how many hours a week are you expected to be there, what are the family leave policies…like do you get paid leave? Working here at IMSA, I was fortunate when I started; when my older son was about 18 months old, I had my younger son, and I took maternity leave and was able to come back and just work part time for a year following that. Those flexible leave policies are really important.”

Panelists agreed on the necessity of inspiring more young girls to get involved in STEM. Heinz noted that the coed IMSA summer camps were full within fifteen minutes of registration opening, while “the one that was only for girls was still open” nine hours later.

“If you know any eighth or ninth grade girls who’d want to spend a week here in the summer, let them know,” she said. “Fill it up!”

Hart called on boys and men in the audience to “find out how you can be a mentor,” as panelists discussed the support of men in their lives and the importance of appreciating differences.

“I just wrote an article on LinkedIn,” Hart said. “And I ended it this way: we are not competition. We are a complement.”

Be the first to comment on "Diverse Women in STEM: The Beginning of Much More"