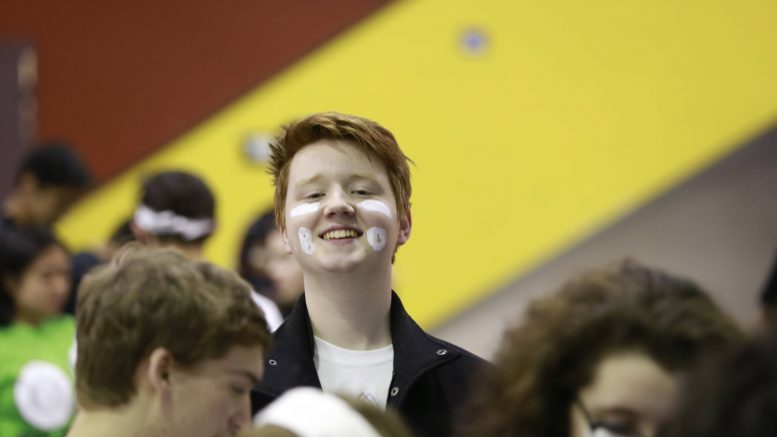 The final day of Clash has always been the most electrifying moment of the competition, with halls making last-minute run-throughs of their drills and students preparing to storm into the auditorium with bursts of color and hall pride. Though these traditions have been carried over for years, Clash 2018 has been nothing short of groundbreaking. Let’s take a look at the events!

To begin the pep rally at 7:30 pm, nominated competitors sped through an intense obstacle course. The events included throwing a bean bag into a basketball hoop, untying a tightly wrapped object, hopping in a potato bag, using a spoon on your elbow to move an object, and hula hooping with a scrunchie on top of your head. While 06 fell behind in the first few events, Melissa Mu (’18) quickly surged through in the last minutes as she solved for change given a receipt. In only a few minutes, she found the correct number and snatched a first place win for 06.

In senior game, each hall was assigned to a bucket and needed to prevent it from filling with balls thrown by other competitors. The hall with the least balls in their basket would win.

The catch? Pairs of competitors must remain bound to each other as they attempted to navigate around the gym.

The result was a heated competition of screaming spectators. As competitors defending their baskets from several halls at once, chants for defense arose from the bleachers.

As the event worth a whopping 900 points, the drill is often the determining factor for first place. Clean dance moves and creative formations drew frequent standing ovations from the audience. Following each hall’s performances came the RC and Studco’s dance, and then decisions were announced. While 04 has been the defending champion for several years in succession, they were finally uprooted by 06.

Overall, 06 scootched past 07 with 25 more points to claim their first-ever champion title. In recent years, female halls have failed to win Clash, and 06 even came near last place in 2017. 06’s victory reflects the accumulation of the hard work the hall has put into rising from the bottom. “This is literally the happiest day of my life,” says Community Developer Sophie Ashbrook (’18) upon addressing her hall. “Thank you to everyone.”