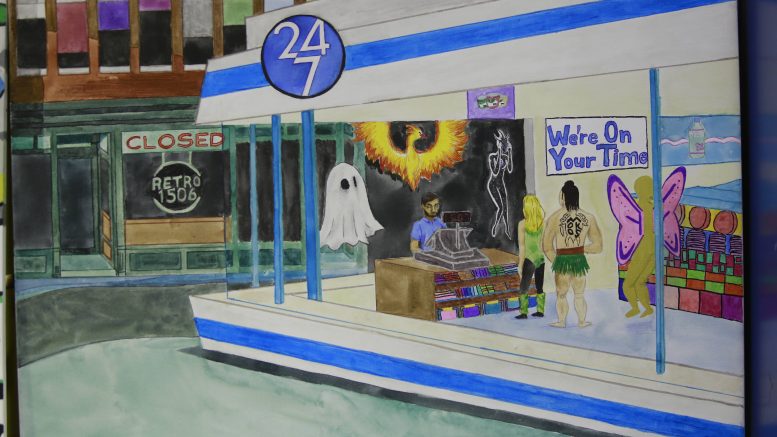 It may have been an I-day, but IMSA students weren’t catching up on sleep today. It was Day 3 of Clash. While the day right before Pep Rally might be less intense than the rest of the week, four events were judged today. Let’s see a rundown.

In the weeks leading up to Clash, every hall painted and created a mural to represent their hall. Judges scored the murals during midday, based on factors such as originality, sense of campus community, quality of construction, aesthetic, and use of theme/incorporation of diversity.

Hall murals included a Victorian-era inspired skeleton made from branches for 1501, a rising phoenix for 1502, a transcendent being in space with LED effects for 1503, a butterfly pattern and a shattered timer for 1504, an elaborate mask for 1505, a nostalgic disco and denim design for 1506, and finally a Nighthawks-inspired convenience store painting for 1507.

Profile Pictures were also judged, and halls took a variety of approaches. 1501, 1503, and 1505 made profile videos that had special effects such as stars twinkling and flames flickering. Meanwhile, 1502, 1504, 1506. and 1507 stuck to profile photos with varying amounts of editing.

Finally, judges ranked each hall’s t-shirt. T-shirts had designs on the front and the names of all the students in each hall on the back. Each hall used there Clash colors and themes to design their t-shirts.

At 7pm in the Auditorium, the halls poured in for Wednesday’s main event: Game Show. Each hall would send up members for short tasks, We have it broken down for you below.

Game Show brought lots of cheers and laughs to those in attendance, and the scores are as follows:

Riddles were also announced last night, with only 1502 correctly solving both (placing them in first place for the event overall), and ’06 snatching the second riddle.

Remember to return to The Acronym for a recap of tomorrow’s Pep Rally and the finale of Clash!

Clash of the Halls Color Reveal

The Rumors of Clash