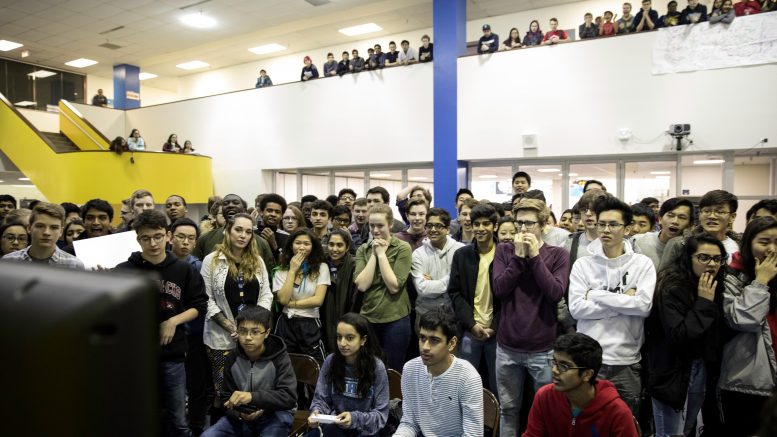 Day 2 of Clash started with the dress-up theme Super Tuesday. During midday, members of all halls gathered in the Old Cafe for a Mario Kart Showdown. Each hall sent two representatives to race on Mario Kart tracks Rainbow Road and DK Circuit. However, later at the Talent Show, Mario Kart was announced to be counted as null, and the points would be allocated towards an additional riddle on Wednesday.

The highly anticipated Talent Show began at 7:15 pm, and the auditorium was filled with performers and restless students alike. Judges Ms. Townsend, Mr. McCutcheon, Dr. Randall, and Dr. Eysturlid provided entertaining commentary and constructive feedback, while halls cheered one another on.

1505 started off the show with a story of a Maori chief learning skills to save his tribe. In the process, he encountered Patrick Pynadath’s (’18) nunchuck skills, a dance routine by a farming village, and a singing performance by Pranav Narayanan (’18). At the end, the auditorium was filled with a unanimous cry of “KIA ORA” by 05 members.

’03 followed with a rubber chicken performance by Gloria Huang (’19) and Diann Moon (’19) and a dance performance by several hall members. To finish off its show, ’03 lit up the auditorium with glowing infinity signs.

Up next, 1507 began with a magic show, a martial arts performance by Noah Krouse (’19) and Rain Bravo (’18), and a rock guitar performance by Justin Elesterio (’18). 07 finished off with a hyped rave scene at the end with dancing in the middle of the stage.

’06 was in sync with its theme, Retro06, as the show began with Briella Henderson (’19) flipping through TV channels. After an aerobics routine, which was followed by a martial arts routine, ’06 finished off with an all dance performance on stage.

And of course, 1501 presented a show with horror elements, including an Irish dance performance and some sick yoyoing. A violin performance followed, accompanied with a martial arts performance by Kathryn Downey (’18). ’01 ended with an on-stage routine of paranormal activity by ’01’s members, commanded by dark overlord Rebecca Xun (’18).

’02 lived up to its fiery name with its phoenix as Annie Xu (’19). Following a routine with a ball, Mounisha Kovour (’18) performed a martial arts sequence. ’02 ended off with a string dance routine by the phoenix with hall members surrounding Annie with a dance.

Finally, ’04 wowed the auditorium with its “butterfly effect,” with protagonist Zach Brahmbhatt (’18) and his “son” Nafay Abdul (’20). A martial arts dance routine was followed by a jazz performance. ’04 ended by throwing origami butterflies into the crowd.

Talent Show this year was a spectacle to remember. With a cohesive performance, 1506 won the show, but many are talking about the performances by 1505 and 1507.

Be the first to comment on "Clash of the Halls: Day 2"