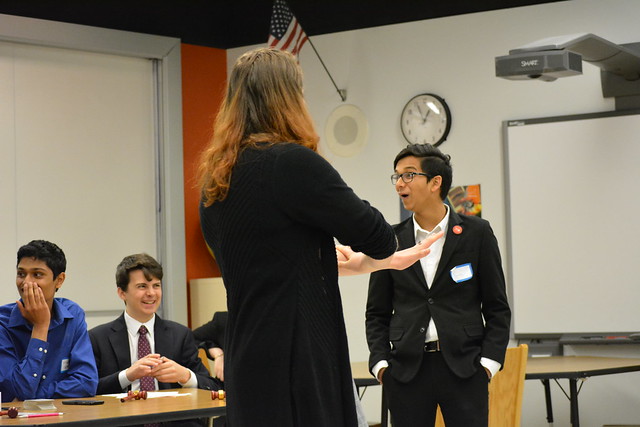 Early on a rainy, Saturday morning, students from various nearby schools including the D204 Valley Schools, Naperville North, Morton West, and Naperville Central arrived at IMSA. Their purpose? To attend IMSA’s Junior State of America chapter convention, InclusiCon. JSA is a non-partisan organization that aims to spread political awareness by holding debates, thought talks, and other such events. InclusiCon had a series of debates, with resolutions such as “Transgender individuals should be allowed to serve in the US military”, “Systemic racism against African-Americans is no longer a prevalent issue”, “Birthright citizenship in the United States should be revoked”, and “The STEM workforce’s gender disparity is a product of systemic discrimination,” as well as a thought talk about identity politics and an activism fair about local political organizations.

When asked why he chose the theme inclusion, the Convention Coordinator Brandon Young-Eleazar (’20) stated, “This year, IMSA’s convention theme [was] Inclusion. In the current world, we often toss around the concept of ‘hot topics,’ or topics that often cause a lot of disagreement, and we don’t pay attention to other issues or conflicts in our society that don’t fall under that category. This convention [talked] about some of these ‘hot topics’ while it also [worked] to provide a larger platform for these under-discussed topics, and bring attention to some big problems affecting large communities in the United States.”

While IMSA’s JSA is a comparatively small chapter, and the turnout for the event was around 20 people, the convention was meaningful for the attendees and organizers. More than just a few hours of debate, InclusiCon was an opportunity for high-school students from various schools to get together and share the ideas they’re passionate about, as well as an opportunity for respectful political discourse.

Be the first to comment on "IMSA JSA’s InclusiCon"