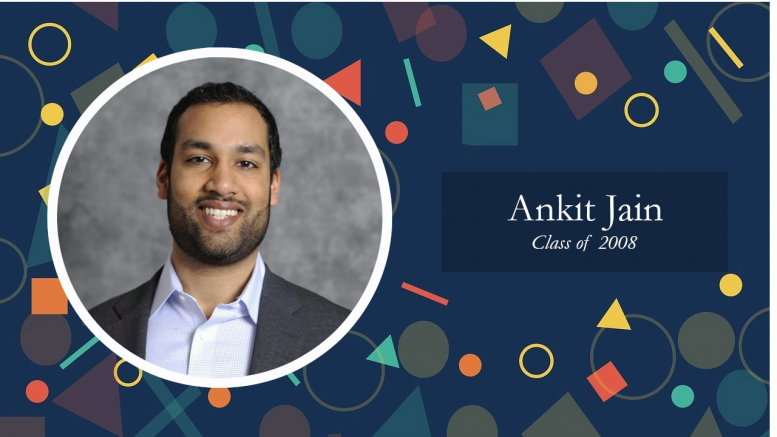 “Pursue your passions.” This is the mantra propagated by college admission counselors, parents, and high school upperclassmen alike when advising others on how to spend a high school career. Yet, even as these formative years provide numerous opportunities for teenagers to discover their future professions, this simple directive holds much greater complexity. How does one identify their passion? Is it necessary, or even beneficial, to commit oneself to a lifelong career? The Acronym aims to provide insight into these questions by examining the academic and career pathways of IMSA alumni and industry experts. Through interviews with leading computer scientists to healthcare innovators alike, we aim to examine how pursuing one’s passions is a dynamic and continuous process that will extend to one’s collegiate years and beyond.

Ankit Jain (’08) is a consultant at the Boston Consulting Group (BCG). BCG works with companies to tackle problems that they have on the top of their minds, focusing on the most prominent issues a company faces, what they are worried about, and how such a business situation can be dealt with in the short-term and long-term. “Everyone’s hurried,” Jain says. “The world is moving faster and quicker and with greater velocity, and so what we try to do is help businesses – especially large ones – [navigate that world].”

One of his most recent projects, completed last winter, involved working with a global medical device company that specializes in producing scopes, catheters, and other high usage medical devices for surgeons. Previously, their focus had been on a subset of their portfolio, but they needed to find new ways to grow. “We worked with them over the course of 12 weeks to devise financial and business plans to help… them ready for the next five years of growth,” Jain explains.

For Jain, one of the most rewarding aspects of his job has been the people who he works with on a day to day basis – people who are both incredibly smart and intellectually curious. A highlight of his career has been working with these people to solve interesting and complex problems that have never really been addressed before. However, as we’ve seen with many of our interviewees, as a high school student, Jain had no idea that this was the direction he would eventually go.

“I was never super amazing at any one class… [but] IMSA forced me to think very critically about a large variety of topics,” Jain recalls. This broader focus on a variety of topics that interested him, rather than a singular focus, has served him well in his career. Jain believes that it set him up for his current job, where he’s forced to confront problems in new ways from may perspectives. He credits his time at IMSA for this ability: “[IMSA pushed] me to think beyond the obvious and beyond just what was happening at the surface. [I learned to ask] ‘why is it happening?’, ‘what causes that to happen?’, and ‘why does that exist?’.”

Coming out of IMSA, Jain recalls having very little idea of what he wanted to do with his career. “I was really pretty aimless coming out of high school. I graduated and was like, ‘Cool. Well I like math and science so I guess I have to be an engineer.’” Indeed, Jain began studying biomedical engineering at Duke, providing him with many interesting research opportunities. His first job out of college was at IBM, where he worked on technological and infrastructure problems. However, he soon realized that he did not enjoy the pure IT work he did at IBM, deciding he wanted to incorporate more of the biology and health work he’d studied at Duke by focusing the healthcare industry. This ultimately led him to pursing an MBA at Kellogg, Northwestern, to “hone [his] business acumen and make that career pivot to be more focused on health care.” While there, he helped run conferences, did some venture capital work within the healthcare space, and focused on healthcare strategy classes. This combination set him up for the job he has today, consulting for BCG.

Upon reflecting on his journey thus far, Jain shares the following advice:

“I think [it’s important to stay] intellectually hungry and [to be] open to new and interesting problems and classes: if there’s a random philosophy class that sounds super interesting, then go take that. Go make yourself an interesting person. Get a lot of experience. Do things that make you uncomfortable because those are the ways that you’re going to grow and make you more effective. And whatever situation you end up in as you grow up – which is a weird way to think about it – just be really open to new things, trying new experiences, and putting yourself out there.”

When asked about his time at IMSA, Jain recalls bits and pieces of the IMSA mission statement: advancing the human condition. He believes that every student at IMSA does have the potential to individually advance the human condition. But he also stresses how that “that doesn’t necessarily mean you have to go get a PhD, discover some crazy molecule, or go identify the next Earth.” There are lots of ways to make an impact in this world, whether it’s through helping people day to day or helping businesses achieve their best potential. As we identify our career paths, Jain encourages every IMSA student to realize that helping others will end up helping us at the end of the day as well.

Eva is a senior from Lombard who lives in 1506 A-wing. She is super excited to serve as the Co-Editor-in-Chief along with Rachna Gupta for the 2020-2021 school year! Outside of The Acronym, she's involved in Lincoln-Douglass Debate, SIR, and entrepreneurship.

The FTX Saga and the Future of Crypto

We Have Questions, Seniors (and Alumni)!

Be the first to comment on "Career Pathways: Using an MBA for a Career Pivot"