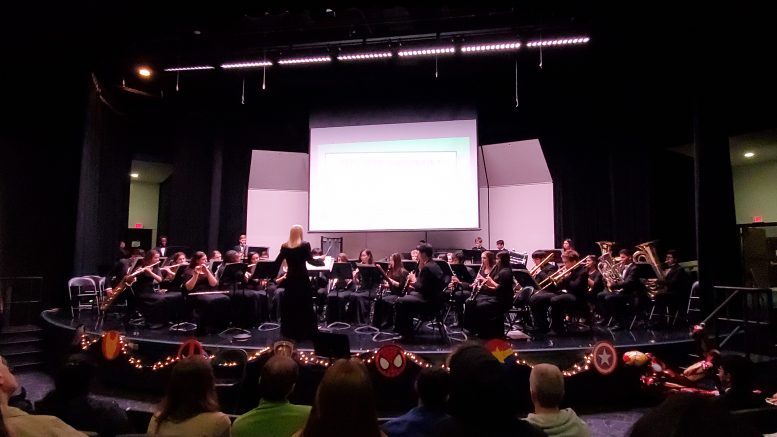 On stage, Mrs. McCarthy conducts the band, featuring a slideshow in the back naming the current song | Source: Kent Oliven

Last Friday’s orchestra and band concert were one for the books. Centered around the theme “Marvel and the Masters”, the concert included music from Marvel superhero movies, along with more advanced, well-known pieces from Mozart, Bach, and many more. All pieces were conducted by Mary Beth McCarthy, IMSA’s orchestra and band teacher.

The concert started with three pieces from the Concert Band: “Guardians of the Galaxy”, “Galop (Dance of the Hours)”, and “What’s Up at the Symphony”. Shehzad Bajowala (‘22), a member of Concert Band states that “Galop” was his favorite song because “the melody is shared between every section of the band, making the piece very cohesive”.

Next was the String Orchestra, which also played three pieces: “Theme From Spider-Man”, “Eine Kleine Nachtmusik”, and “Theme From Ant-Man”. Haley Rodriguez (‘22) claims her favorite piece was “Eine Kleine Nachtmusik” since it’s a classical piece that most people are familiar with. While playing, Haley compared the orchestra’s performance “with professional orchestras that also played it”.

Chamber Orchestra, a higher-level orchestra, came on stage following Concert Orchestra. Once again, three songs were performed: “Black Panther”, “Adagio for Strings”, and “Music From the Avengers”. Many members of this orchestra, along with the top players from String Orchestra and the bands came together to beautifully play “Il Barbiere Di Siviglia”.

The concert ended with an act from Wind Ensemble, which played three pieces: “Avengers: Endgame”, “Second Suite in F for Military Band I. March”. The final piece of the night, all irony included, was named “Finale: Symphony No. 4 in F Minor”.

In the transition between songs, solos were played by talented musicians from each section, including Zach Eness, Natalie Oliven, Cindy Oh, and Thomas Johnson.

For the concert, the auditorium was decorated with fairy lights, several superhero symbols, and inflatables along the staircases. All decorations were provided by the art department, who graciously devoted their time and effort into making the auditorium beautiful. Mrs. McCarthy expresses that there was a “terrific collaboration between the music and art department”, making the showcase even better. As well, the art department added an aspect of audience involvement, as students dressed as villains ran through the aisles, dancing or making faces at audience members.

At a STEM school, the music program is frequently overlooked or forgotten. However, students in orchestra and band classes stay deeply committed due to their passion for their instrument. Rachel Selvaraj (‘22), the concertmaster of String Orchestra, states that playing her violin allows her to truly express herself when words can’t. For example, she can play “an angry song on a bad day” that corresponds with her mood. Rujuta Durwas (‘22), similarly explains that playing her instrument has given her perseverance, as she pushes herself to practice to get over difficult spots in the music.

After months of hard work and dedication, IMSA’s orchestra and band students performed exceptionally for their first concert of the year. Don’t forget to catch the upcoming concert, “Sleigh Ride Around the World” on December 13th!

Fitting the Arts into a STEM School

Be the first to comment on "Marvel and the Masters"