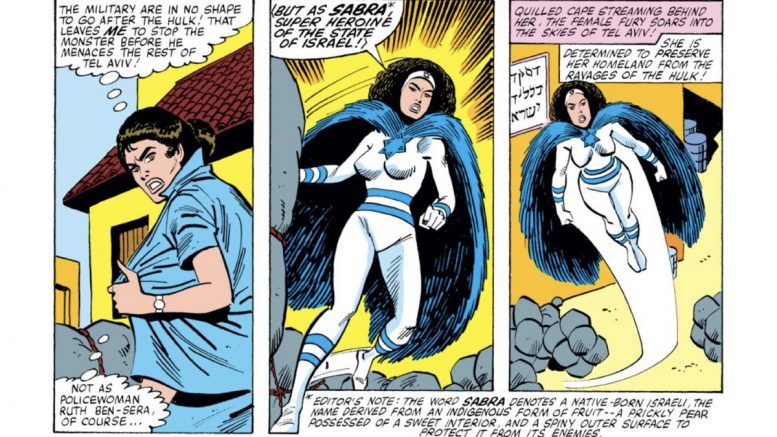 Marvel has announced that its next Captain America movie will feature a character who works for the Israeli intelligence agency. The character, Sabra, first appeared in a 1980 comic before being featured in a 1981 issue of the Incredible Hulk. A mutant with superhuman abilities, she wears an Israeli flag-inspired costume, with the Star of David emblazoned on her chest and headband. Her character will be played by Israeli actress Shira Haas in Marvel’s upcoming movie.

Marvel has faced backlash for opting not to omit Sabra from the movie entirely, as each day brings new headlines about Israeli violence in the occupied Palestinian territories. Last week, for example, in the occupied West Bank, seven-year-old Rayan Sulaiman was chased by Israeli soldiers. Pursuing the boy, the soldiers called him a “stone thrower,” and he “dropped dead out of fear,” likely a heart attack. In the occupied Palestinian territories, Israeli forces are not seen as heroes but objects of fear, so many have called for Marvel to leave Sabra out of their 2024 movie.

In the Incredible Hulk #250, the Hulk stows away to Tel Aviv. Chaos at the docks is answered by policewoman Ruth Ben-Sera, who promptly transforms into Sabra, “super heroine of the state of Israel.” “Sabra,” as footnoted in the comic, “denotes a native-born Israeli, the name derived from an indigenous form of fruit—a prickly pear possessed of a sweet interior, and a spiny outer surface to protect it from its enemies.”

The “indigenous form of fruit” from which “sabra” is derived is the Hebrew “tsabar,” which in turn comes from the Arabic “saber,” or “cactus fruit.” Despite coming to denote a native-born Israeli, it was first one of Palestine’s “best-known features,” with the fruit growing throughout the country and appearing in local art. More recently, to Palestinians, it has been a symbol of perseverance in the wake of the 1948 Nakba (“catastrophe”). The Nakba marked the end of the British Mandate of Palestine, after which Zionist forces established the State of Israel, setting off the first Arab-Israeli war. During the Nakba, Zionist forces expelled 75,000+ Palestinians from their homes and captured 78% of historic Palestine.

Though the character was created before the fact, the name “Sabra” additionally evokes the 1982 Sabra and Shatila massacre, during which an Israel-allied Lebanese Christian militia, the Phalangists, massacred Palestinian refugees in the Sabra and Shatila camps of Israeli Defense Force-occupied Lebanon. The number of people killed remains unknown. Marvel’s announcement came just a week before September 16th, the date marking 40 years since the massacre.

In the comic, a starving Arab boy called Sahad steals a watermelon from a street vendor. He befriends the Hulk and says to him, “Sometimes it is very hard to be an Arab in Israel. Both my people and the Israelis say that this land is theirs. They could share it, but two very old books tell them they must kill each other over it. Me, I don’t read books.”

Sahad is walking into a cafe when he is struck by a bomb thrown by a group of Arab “terrorists” aiming to reclaim Israel “in the name of Arab sovereignty over these lands.” The Hulk carries him away from Tel Aviv, to the desert. Sabra, thinking he is in league with the bombers, follows him there, hoping to arrest him. “But she is also a woman, capable of feeling, capable of caring,” so the Hulk, after much yelling, finally convinces her that he was not responsible for Sahad’s death. The comic ends with: “It has taken the Hulk to make her see this dead Arab boy as a human being. It has taken a monster to awaken her own sense of humanity.”

The Palestinian Campaign for Academic and Cultural Boycott of Israel has tweeted that it is “outraged that Marvel will glorify apartheid Israel’s murder and ethnic cleansing of Indigenous Palestinians with its Israeli agent character… The original comic’s ugly racism and valorization of Mossad are sickening.”

American Muslims for Palestine, similarly, has begun a petition for Marvel to leave Sabra out of the film. The group writes that it is “troubled by the distasteful announcement” that the upcoming movie will feature a “superheroine of the state of Israel,” when Israel is “recognized by the entire human rights community as an apartheid regime, guilty of ongoing war crimes and crimes against humanity.”

The timing of Marvel’s revelation that Sabra will feature in the film has sparked much outrage. “It’s not just the timing or the name but also the fact that the massacre itself was led by a Mossad-linked [militia] in territory under Israeli control,” Yousef Munayyer, a Palestinian-American writer and analyst, told CNN. “Given all of this, it is hard not to conclude that the people at Marvel are either abjectly ignorant about the region, its history, and the Palestinian experience, or that they deliberately aimed to kick a people living under apartheid while they were down.”

In an article for the Independent, Ahmed Twaij notes that Marvel has previously been criticized for avoiding politics in its media. But, he continues, “it looks very like they are getting political here. In the binary ‘good versus evil’ world of their action movies, Marvel surely knows how an Israeli government agent being styled as a superhero must look.”

Twaij notes that just last month, Israel launched another series of airstrikes on the Gaza strip, killing at least 10 Palestinians, including a five-year-old and a leader of the Palestinian Islamic Jihad, wounding upwards of 75, and destroying infrastructure. “For millions of Palestinians, Israeli security forces and intelligence agencies are symbols of fear, oppression, and violence.”

“If Marvel wanted to be truly politically balanced,” Twaij goes on, “they would tell the story of a Palestinian superhero protecting Arab children from Israeli rockets hitting a Palestinian school or hospital alongside the heroic narratives of Sabra.”

Palestinians have not been the only ones to voice concerns about Sabra’s upcoming appearance. Israeli author, scriptwriter, and graphic novelist Etgar Keret told CNN that Sabra’s character was “created before two Intifadas, it was created before the falling of the Oslo Accords—it was created in a totally different reality and state of mind. And now… It’s tough to keep this kind of icon of simplicity.”

Marvel’s decision to feature Sabra in its upcoming movie has not been wholly ill-received. Some pro-Israel advocacy groups have celebrated Haas’ casting as Sabra, with the organization StandWithUs, for example, tweeting, “Fantastic news!…Mazel tov [good luck] Shira!” following the announcement.

Additionally, some are unhappy about Sabra’s upcoming appearance but not because of the impact it would have on Palestinians. Uri Fink, an Israeli comic artist, created a character called Sabraman in 1978, two years before Sabra’s first cameo in a 1980 Marvel comic. Now some fans are questioning whether he will sue: “I’m getting messages from people who know the character, asking what I’m going to do about it, as if they’re encouraging me to sue Marvel and make a killing off the whole thing,” he told Ynet.

Fink himself has expressed concern as to how Marvel will portray Sabra. “Sabra went on to feature in some stories that weren’t very pro-Israel. It was already weird back then. So I don’t think this would augur well for how she’d be depicted by Marvel now that they’ve gone woke.” Finally, while Mossad, Israel’s state intelligence agency, has appeared on screen before, the Captain America movie will mark the first time it makes such a high-profile appearance. According to experts such as Avner Avraham, a former Mossad officer and founder of a consulting firm for TV shows featuring Israeli agents, it will give the agency a PR boost. Avraham told CNN: “This is the ‘TikTok’ way, the cartoon way to talk to the new generation, and they will learn about the word Mossad.” Further, “it helps the branding. It will add a different audience.”