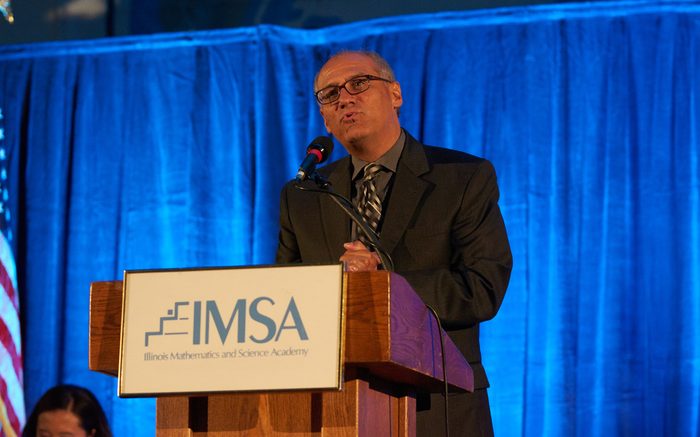 Dr. Hernandez speaks at the 2017 Convocation. He will be departing from IMSA following the 2019-2020 school year. | Source: Andriy Sheptunov '17, IMSA Student Productions

This 2019-2020 school year we must say goodbye to Dr. Bob Hernandez, IMSA’s principal, after 25 years of service to the academy in a variety of roles.  He has made a wonderful addition to the IMSA staff team and has helped advance our school during his time here.  After the end of this school year, Hernandez plans to spend more time with his mother and take care of her, as she is placed in assisted living. He also hopes to play golf, work on his model train, and teach doctoral students at Aurora University.

Hernandez was not always principal of IMSA — he actually went through many departments before he achieved his current position. When asked to recall his biggest accomplishments were at IMSA, Hernandez decided to split his career into three phasese. First, he worked in the Admissions Department. In this position, he was proud of working on minority recruitment, modifying several programs, including creating SEAMS and extending EXCEL, and increasing different cultural representations in the student population. The next phase of his career was in Student Life, in which Dr. Hernandez created service-learning, LEAD, and generally helped grow Student Life from four to eleven departments. Finally, as principal, he has formed the peer multicultural educators, which came was based upon two students’ original idea.

The most fulfilling part of Dr. Hernandez’s job is seeing his past students grow up to be quite successful, seeing how they have made use of the skills they’ve learned at IMSA. He takes this to heart, saying, “never underestimate the power of one student.” To his past self who was starting his career at IMSA, unknowing of the future, Dr. Hernandez would stress to embrace the beautiful uniqueness that is IMSA. Every student has potential and most have ideas that could grow and become quite useful to the school.

When I asked Dr. Hernandez how IMSA has changed him, both professionally and personally, a large grin immediately spread across his face. He explained how he’s met some of the most wonderful people here who’ve all made an impact on him. He showed me a mask made for him by a student and spoke nostalgically about the class of ‘99, a class in which he was heavily involved in recruiting. He listed off a few names of staff members who he finds very dear, including Colleen Geihm and Minerva Ratsamy, all of which kept him humble and opened his eyes to new ideas.

Finally, I asked Dr. Hernandez about how he has made a change at IMSA. He believed that some of his initiatives were controversial but over time, he learned to always stick with IMSA’s beliefs, and he let that guide his decisions. Hernandez changed both adults and students, making “small differences” on campus. Finally, he loved every minute of his job at IMSA. Looking back on the 25 years spent here gives him happiness, and he hopes to continue the next chapter of his life with the same smile.

This is my third year on the Acronym! I currently serve as the Co-Editor in Chief. I love writing and editing for Acronym, it's been my passion for so long. I am currently a senior at IMSA and I live in 06B!

2 Comments on "Dr. Hernandez: His Legacy"