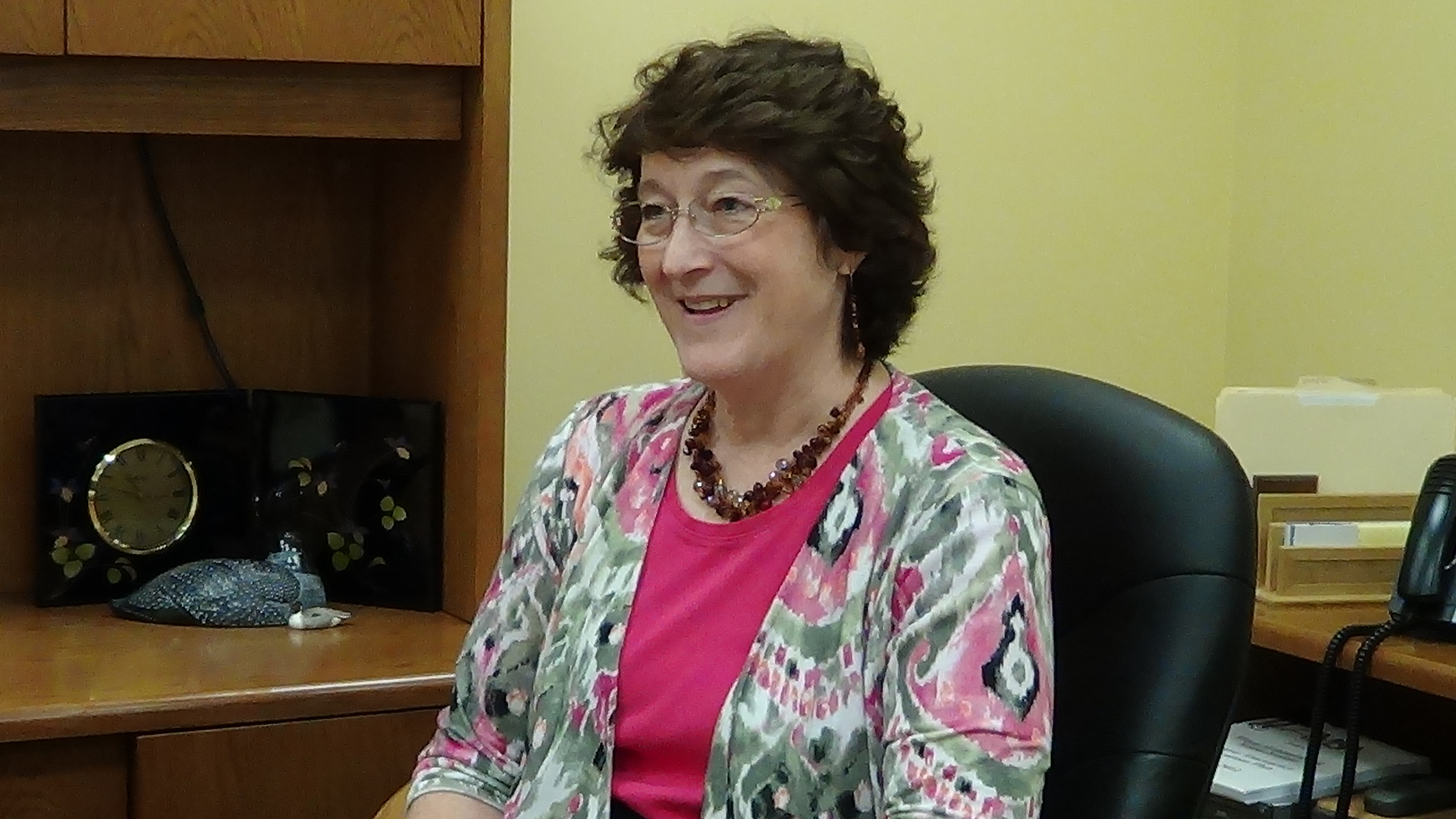 After a few months of absence due to her undergoing surgery, Dr. Sharp was finally able to make room in her busy schedule for an interview.  Welcomed into her office, I was immediately struck by her warm persona and caring, almost grandmotherly, smile. Turns out, she indeed became a grandmother just under a year ago!

Prior to joining the IMSA family, Dr. Sharp worked in a variety of administrative capacities, from serving as a hall director for undergraduates (similar to IMSA RCs) to running academic support programs (IMSA parallels include the Writing Center and IRC). After growing up in the rolling hills of rural Boscobel, Wisconsin, she received her Bachelor’s degree in psychology and sociology at the University of Wisconsin Platteville. Seeking work experience, she spent a few years at the University of Southern Illinois at Carbondale, where she came to realize that student development was her calling. Soon, she had earned a PhD in urban education at the University of Wisconsin Milwaukee. Just before coming to IMSA, Dr. Sharp served as an associate Vice President at Harper College. No matter what her title, however, her goal has always been “to bring together different people from across campus.”

A: They’re mostly good surprises at IMSA. Some of the best surprises are the enthusiasm and spirit of the student body here, which just permeates every student I have met. You don’t always see that at a school. The faculty and staff here are fantastic. This is one of those places that every person dreams of working, and likes to see things happen, because people carry their own load and go above and beyond. The things I was prepared for were some of the things people shared with me during the interview process, as to some of the accreditation things we need to work on this year. There are a variety of other pieces where you see the tip of the iceberg, but there’s this HUGE amount underneath. I don’t want to say it was surprising, but it’s something that takes time to learn, especially when I’m working with people who have been here for quite some time.

Q: What are some of the main issues you are currently working on at IMSA?

A: Last year we had a visit by the Advanced Ed program, which is the program under which we’re accredited, and we had some things that when they left they said, “these are some things we want you to work on.”   One of the things we’re working on right now with a group from across the campus is a school improvement plan, where you look at “what are we doing right now that in the next year or two, we want to make improvements on, usually in student learning.” A big piece of it is the assessment of SSLs that the leaders of each of the academic departments are working on; they’ve been working on it for some time, but now they’re documenting it.

Q: Where do you see IMSA in one year? What will have changed?

A: I think the biggest thing with this plan is we really will have it on paper and know what we’re doing and be taking the information and saying “what do we learn from it” and “now what do we want to do because we’ve learned that.” It sounds like a very slow process, but to go through identifying and laying that out in a document is hard work; it’s thinking about “what does it really mean” and then “what can we do.” It’s easy to say sometimes, “well, let’s count this, it’s easy to count,” but then it doesn’t help you get at what the real issues are underneath it that you need to change.

Q: How will this trickle down to what the students see, for instance, the sophomores next year?

Q: Where do you see IMSA in five years, or even ten years?

A: Some days I feel so new at what I’m doing and envisioning that it’s hard to get to that point just yet. I would hope that by then we’ve got some very mature things that we’re doing, and that we’ve made some leaps and bounds, changes that we feel will really make a difference for students and that we’re seeing the results.

Q: Are there any specific ideas or changes that you’d like to bring to IMSA?

A: Right now, no. My whole vision when I came was to work with folks here, see what they were doing, see where they wanted to go, see what boundaries or what pieces were thrown in their pathway that stopped them from doing what they do, and seeing what we could do.

Q: Last year there was a lot of controversy over the rules at IMSA. For example, one article published in the Acronym was called the “Illinois Malnutrition and Sleep Deprivation Academy,” which described the overbearing nature of a lot of the rules at IMSA, and later on in the year, there was an article published, called “Student Life, Student Death,” which talked about stifling creativity. Many students and alumni think that IMSA over the years has changed from a school that encouraged creativity and exploration to where we are today. How can we help meet the school’s requirements and still encourage the mission statement that IMSA strives to accomplish?

A: I’d say as creative as you all are, there is lots of time for creativity, and it probably isn’t between 2 and 5 in the morning. There’s a lot of other things we can do in ways that are still honorable on both sides to be creative, to do those kinds of things, to get people together, and then to balance it, to figure out how much energy do we have to give to the many tasks we want to do and then how do we lay those out over the three years we’re here to do them well, and do them well honorably for ourselves as a physical being as well as a creative mind.

Q: Do you think it’s fair for the entire student body to suffer the consequences of one person’s actions?

A: Probably not, and I would guess, but I don’t know, that we probably didn’t do some things based on just one. I’d guess that there’s a pattern, because people here tend to study a pattern and make a decision based on a pattern, and the legal ramifications.

Q: What is your honest impression of the class of 2013?

A: You guys are fun; you have a lot of energy. I have a limited experience with the whole group— there was that one meeting at the beginning of the year— but I liked some of the ideas that came out of that, especially the ideas on how you would treat others. I really think that you are the leaders; people look up to you.

Q: What did you think about the comments on trolling?

A: I had some questions about what was that exactly, well certainly the language is a little bit different from what I would understand. I think the one thing that struck me, was that after that meeting, I had three of your classmates come see me to apologize for the wild behavior and comments made because they had higher expectations of each other. There are always those rascal comments.

An Update On Titan Crew: New Additions and Initiatives

Be the first to comment on "Q&A with New Principal: Dr. Diana Sharp"