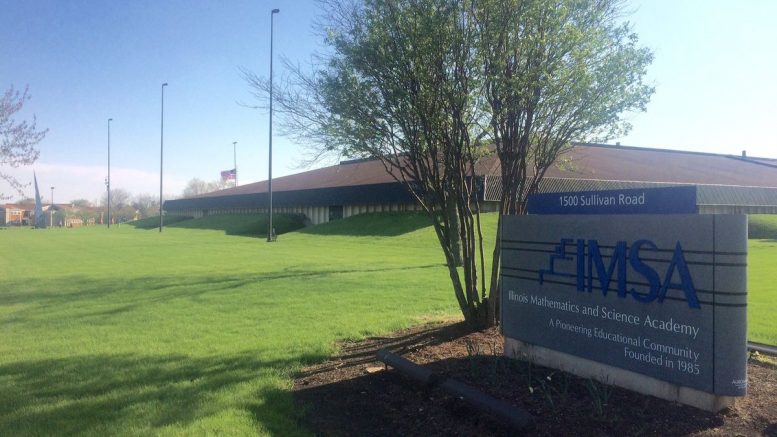 A new addition to the math department at IMSA is Anderson Trimm. | Source: Chicago Tribune

Dr. Anderson Trimm received his Bachelors of Science in Physics from the Georgia Institute of Technology and his Doctorate in Theoretical Physics at the University of Texas at Austin. After his education, he became a NSF Research Fellow for the Kavli IPMU at the University of Tokyo. Shortly after, he served as a Postdoctoral Research Associate for the String Theory Group in the Department of Physics at the Seoul National University.

Tell us a little about yourself:

“I really love action movies and rock music, especially the ones made in the best decade for both — the 80s. When I am not reading technical articles, I enjoy books on the history of math/science. I spend most of my free time hanging out with my wife and two kids.”

What courses are you teaching this semester?

What inspired you to switch from teaching Physics to Mathematics?

“As an undergraduate, I was fascinated by the major breakthroughs in physics that had come essentially through a close analysis of the underlying mathematics and not so much through experimentation. For example, Maxwell’s proposal that light was an EM wave was not confirmed experimentally for another 40 years.

As a grad student at the University of Texas, I was very fortunate to have many world-class physicists and mathematicians in the same building to learn from, and I attended many joint seminars every week where we discussed research that was in the intersection of the two disciplines.

Sometime after graduating, or maybe just before, I read the biography of the great mathematician Harish-Chandra. I was quite surprised to read that some of his experiences were very similar to mine. He was a student of Paul Dirac, one of the founders of Quantum Mechanics, and after graduating from Cambridge with his Ph.D. he followed Dirac to Princeton as his research assistant.

At Princeton, he started interacting with mathematicians, and he learned some mathematicians had written a paper on a topic related to relativity that was more mathematically rigorous and comprehensive than his own paper on the same subject.

When he lamented this to Dirac, he was surprised that Dirac was completely dismissive, and just said something like ‘I don’t care about mathematical proofs, I only care about how the universe works.’ After that comment, Harish-Chandra decided that he didn’t have the sixth sense that Dirac had that made him so successful in physics, and that he would make a better mathematician — and he did make many very important contributions to mathematics in his lifetime, and was even under consideration for a Fields Medal.

This story really struck me, as I had developed at some point the exact same feeling about my own abilities. My research work has always been heavily mathematical, but these days I am mostly interested in problems in geometry arising from quantum field theory/string theory, rather than the physics of the latter.

Moreover, as physics is an experimental science, and I have very limited experimental skills, I feel like I am better suited to teaching math, though I do relish the opportunity to connect math lessons to physics whenever I get the chance.”

Students heard that you studied in Japan for a period of time. What drew you to studying in Japan, and what was your favorite part of that experience?

“I spent the summer of 2014, which was my final year of grad school, in Japan on an NSF EAPSI fellowship. This fellowship has been around for a couple of decades and is meant to strengthen research collaboration between the US and various Asian institutions.

One of my hosts in Japan, who is a professor at IPMU, used to be a collaborator of my former Ph.D. advisor and was doing really interesting and cutting-edge work, so it was a great opportunity to learn from him, as well as many others as IPMU is one of the top research institutions in Japan.

Also, toward the end of one’s Ph.D., it is important to attend a lot of conferences and give a lot of research talks to advertise yourself for when you start applying for postdoctoral research positions. There aren’t a ton of jobs out there paying people to sit in a room and think about strings in 10 dimensions, so it seemed like a good idea to not limit myself to just the US job market.

Also, the stipend for the program was a lot more than I would have made teaching that summer. The whole experience was really cool, as I not only got to experience living in Japan for several months, but I got to go through the program with grad students from many different disciplines, and we formed friendships as we attended various functions together throughout the summer.

The program also included Japanese language and cultural lessons (the first pre-program meeting I had for the program was in Washington D.C., where the National Science Foundation led a session to instruct us on the importance of going out for a night of drinking with our future Japanese colleagues, and on who pours the drinks, with how many hands, how deeply to bow as you pour, etc., which was surreal), as well as a homestay for several days with a Japanese family, which was a really memorable experience.

The only downside was that the Strings conference that year was at Princeton at the same time, and I was not allowed to attend as I was required to be in Japan for the entirety of the program. So, for the first two weeks of my stay, I was essentially in an empty office while everyone else was in Princeton. However, partially as a result of my work that summer, I was invited to give a short talk at Strings the next year.”

What are you looking forward to most this school year?

“Being back in the classroom and getting to know the students, getting to share my love of mathematics, and hopefully helping others to see the beauty and excitement in mathematics that I see.”

A piece of advice for high school students.

“The best advice I got from my Ph.D. advisor at the start of grad school was to attend many seminars, so that I could see the active research going on and to find something I was interested in.

I would similarly encourage high school students to try many things, talk to many people, take advantage of internships and other non-traditional learning opportunities, and find something you are really passionate about.

Motivation, I believe, is the key to success. Even if you don’t consider yourself a math person, if you can at least see math as a useful tool for something you do like, that can go a long way in improving your performance in class and increasing your enjoyment of the subject.”

The Shocking Revelations from Meghan and Harry’s Oprah Interview

Be the first to comment on "Meet an IMSA Teacher: Dr. Anderson Trimm"