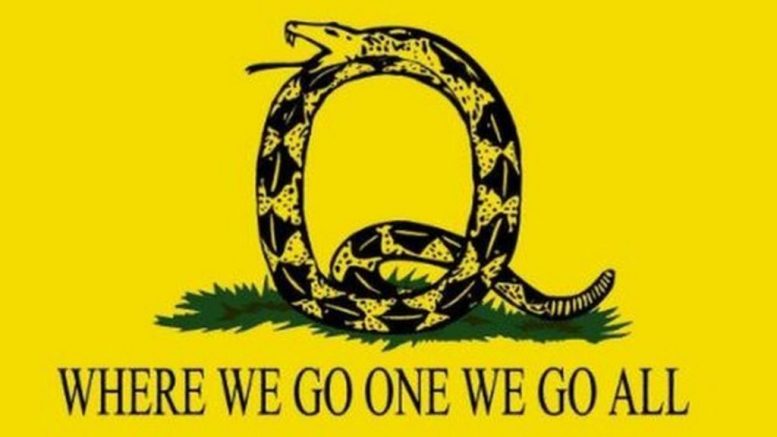 QAnon's most popular slogan "Where we go one, we go all" | bbc.com

QAnon followers believe in a covert battle between the POTUS and a malevolent group of celebrities, political elites, and the so-called “deep state” involved in a child sex-trafficking ring. They believe that a Satan-worshipping cabal of pedophiles runs the United States, controlling the media, Hollywood, and politicians including prominent figures like Hillary Clinton, Barack Obama, Oprah Winfrey, Ellen DeGeneres, and Tom Hanks. They believe that a group of military generals recruited Donald Trump to expose and punish the malefactors in a moment called “the storm.”

Among other bizarre ideas, they believe that celebrities and political elites farm children in underground caves in order to drink their blood which allegedly contains a life-extending chemical that prevents aging. Some even contend that his tweets are misspelled purposefully, saying that “covfefe” and “the smocking gun” were his attempts to convey messages through code.

QAnon has become a baseless amalgamation of conspiracy theories including claims about the assassination of John F. Kennedy, the existence of U.F.O.s, and the 9/11 “truther” movement. It is perpetually growing and adding new claims, but at its core, most if not all followers believe in the existence of a global pedophile cabal.

How did it start?

In October 2017, a post appeared on 4chan, the fringe internet messaging board, from an anonymous account calling itself “Q Clearance Patriot.” This poster, who later became known as “Q,” claimed to be a high-ranking government insider with Q clearance, a United States Department of Energy security clearance with access to classified information, with access to classified information about Mr. Trump’s war against the global cabal. Q claimed to post in order to covertly inform the public about Trump’s master plan to stage a counter-coup against members of the deep state. Q supposedly gives secret clues about the coming apocalyptic “great awakening.”

While in part the origins of this unsubstantiated conspiracy theory can be traced back to legitimate fears about the real horrors of human trafficking, the more worrying connections are the theory’s similarities to blood libels, ancient anti-Semitic canards claiming that Jews murdered Christian children for their blood for religious rituals. Historically, these beliefs have led to the persecution of Jews in Europe.

How did it gain popularity?

Though it started on message boards, it quickly spread to social media. The COVID-19 pandemic has only furthered its reach as in the four months since March, QAnon Facebook group membership has grown over 700% according to the BBC. With people stuck indoors, they might turn to the internet for entertainment and wind up being pulled into the QAnon community. Social media algorithms groups people,  for instance, who might have been interested in alternative health with the anti-vaccine movement, and then Trump, and then eventually QAnon. With a few clicks, people could end up doing down rabbit holes, getting deeper and deeper into conspiracy and misinformation.

While it’s hard to determine how many believers there are, it’s clear that the number is not small. According to the New York Times, “even if you count only the hard-core QAnon believers — excluding “QAnon-lite” adherents who might believe in a deep state plot against Mr. Trump, but not a cabal of child-eating Satanists — the number may be at least in the hundreds of thousands.”

Why is it important?

QAnon might have been just another crazy but harmless conspiracy theory if it had stayed on the internet. The FBI says that QAnon and its many conspiracy theories are a potential domestic terrorism threat. This is evidenced by the actions followers have begun to take:

Several times, people believed to be QAnon followers bring their weapons to places Q told them were somehow connected to Anti-Trump conspiracies. In June, an armed man drove an armored vehicle to the Hoover Dam supposedly on a mission from QAnon. Followers have been involved in a foiled assassination plot against Joe Biden, a devastating California wildfire, and an armed standoff with local law enforcement officers in Arizona. In July, a 24-year-old man was charged for shooting a reputed mob boss after being spurred on by QAnon theories. 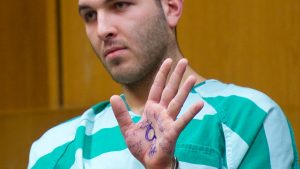 As QAnon is becoming more and more popular, it’s nearly mainstream. In fact, there are roughly 50 Q supporters who ran for office in the Republican Party this year. It’s possible that Marjorie Greene, an avowed QAnon supporter who has claimed that there has been an “Islamic invasion” of Government offices, will represent a heavily conservative district in Georgia in Congress next year. 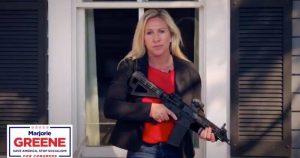 What’s worse is whether Trump knows the details of the QAnon theory or not, he has embraced the movement’s supporters. During a White House press briefing, he said, “I’ve heard these are people that love our country.” Moreover, he has shared posts from QAnon followers around 200 times on his social media accounts. His refusal to refute his affiliation with QAnon has only validated the movement in the eyes of followers.

Social media has been infected with QAnon-related false information about Covid-19, the Black Lives Matter protests and the 2020 election. Supporters suggest the race riots are fake and that the Covid-19 vaccines are in truth tracking devices made by the cabal.

In 2018, Time Magazine declared Q as one of the 25 most influential people on the Internet.  The base that this movement has accumulated is incredible and quite frightening. Today, regardless of how many times Q’s predictions and claims have been disproved, the QAnon base only continues to grow. Early on, Q claimed that Robert Mueller was investigating and going to indict the cabal of Democratic leaders and that President Trump was secretly working with him. They believe President Trump has secretly created a police force to arrest members of the cabal and force them to wear ankle bracelets, that JFK Jr. is alive and helping Trump, and that Hillary Clinton has been arrested. Now the Mueller investigation is in the past and no such indictments have been made, JFK. Jr is still most certainly dead, and Hillary Clinton is still a free woman.

To followers, QAnon is greater than any statistic or fact. This movement has reached a point where its followers can’t even respond to reason because their thinking isn’t their own. This seems to expose a larger problem with dogmatic thinking in our country as a whole.

2 Comments on "QAnon: What is it and why is it important?"