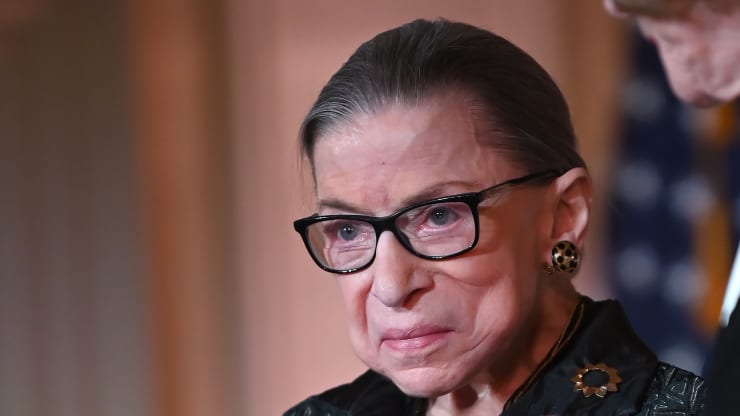 On September 18th, United States Supreme Court Justice Ruth Bader Ginsburg passed away from health complications related to pancreatic cancer. She was the second woman to be appointed to the Supreme Court and the first Jewish woman to hold the position. Ginsburg, who served on the court for 27 years, is remembered as an advocate for gender equality, immigration rights, voting rights, and LGBTQ+ rights.

Ginsburg began her career as a clerk for U.S. District Judge Edmund L. Palmieri, from 1961-1963, after graduating first in her class from Columbia Law School in 1959. After her clerkship, she taught law at Rutgers University Law School from 1963 to 1972) and at Columbia Law School from 1972 to 1980, where she became the first female tenured professor. During her tenure at both institutions she fought for equal pay and equal retirement benefits. In 1972, Ginsburg founded the American Civil Liberties Union’s Women’s Rights Project where she began litigating gender-discrimination cases, where she worked on more than 300 gender-discrimination cases. This includes arguing six cases in front of the Supreme court, five of which she won.

Her time serving as a judge began in 1980 when she was appointed to the U.S. Court of Appeals for the District of Columbia by President Jimmy Carter. In 1993, she was nominated by President Bill Clinton to fill a seat on the U.S Supreme Court and was sworn in as a justice on August 10, 1993.

Ginsburg is widely known for being a fighter for gender equality, especially during her time on the Supreme Court. In the 1996 landmark case United States vs Virginia, it was decided 8-1 that the gender-exclusive admissions policy of the Virginia Military Institute was unconstitutional. The majority opinion was written by Ginsburg where she states that gender equality is a constitutional right. She reiterates this in a dissenting opinion on the 2007 court case Ledbetter v. Goodyear Tire & Rubber Company, where, in a 5-4 decision, an employer can’t be sued if the discrimination incident hasn’t been reported in 180 days. As a response to this decision, Ginsburg wrote that “Pay disparities often occur, as they did in Ledbetter’s case, in small increments; cause to suspect that discrimination is at work develops over time. Comparative pay information, moreover, is often hidden from the employee’s view.” Ginsburg would read this dissent from the bench, instead of just filing it with the clerk, to make sure that the existence of the gender wage gap was more commonly known. She has also sided in favor of protecting women’s reproductive rights in numerous court cases.

Ginsburg didn’t just advocate for gender equality but also for the civil rights of other groups. She showed her support for LGBTQ+ equality as a former officiant of same-sex marriages, the first Supreme Court justice to do so, and with her positions on numerous Supreme Court cases. This includes her siding to legalize same-sex marriage in Obergefell v. Hodges, striking down the Defense of Marriage Act in United States v. Windsor, and siding to protect employees from discrimination based on sexual orientation and gender identity in Bostock v. Clayton County. She has also sided to protect voting rights with her dissent on Shelby County v. Holder, which overturned a statue of the 1965 Voting Rights Act, which has been linked to new voting laws disproportionally impacting minorities. Finally, in cases related to immigration policy, she has sided to protect the rights of noncitizens to challenge detention in court, overturn the Trump Administration’s ban on the Deferred Action for Childhood Arrivals (DACA) initiative, and defend placing limitations on government detention.

Throughout her life, Ginsburg has been an active champion in the rights for all people and has worked tirelessly to advance progress. No matter the form, all of our lives have been impacted and shaped by the legacy of Ruth Bader Ginsburg.