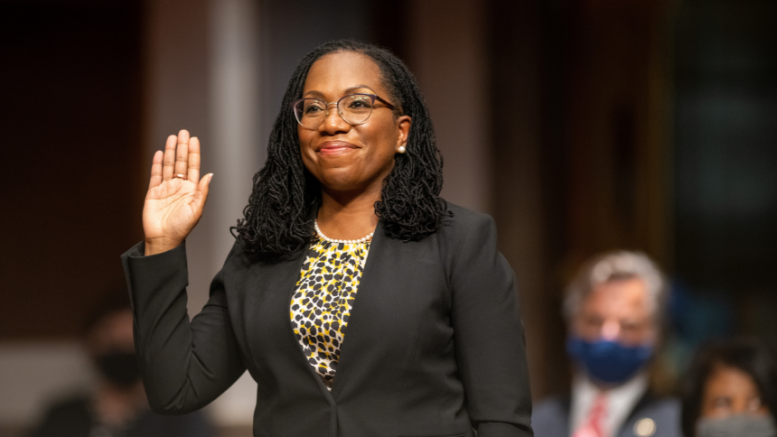 On March 21, the confirmation hearing for Judge Ketanji Brown Jackson began as Judge Jackson introduced herself and the 22 Senators on the Judiciary Committee gave their opening statements.

Judge Jackson gave her opening remarks talking about her life and background as a judge stating “I have been a judge for nearly a decade now, and I take that responsibility, and my duty to be independent, very seriously.”

The Democrats on the Committee praised Judge Jackson’s background, with her serving as a public defender, Supreme court clerk, and Federal judge in various courts. New Jersey Senator Cory Booker discussed the historic nature of her nomination (and later confirmation) as the first black woman to be a Supreme Court Justice.

Many Republican Senators however brought up past confirmation hearings, especially the Justice Kavanaugh and Barret hearings, exclaiming that Democrats treated the nominees and the Republicans who supported them poorly. Senator Graham stated that her hearing “won’t be a circus”. Some senators also criticized liberal groups that supported her, claiming that those groups had a significant role in her nomination. Many foreshadowed questions on critical race theory, court-packing, and her previous sentencing decisions that were to come.

The second day of Judge Jackson’s hearings was filled with many questions that lasted for 13 hours. There was much controversy on this day of the hearing, as Republican committee members asked a variety of questions ranging from critical race theory, her previous sentencing records, gender identity, and her opinion on court-packing.

Missouri Sen. Josh Hawley questioned Jackson’s sentencing record in cases related to child pornography, claiming that she is sympathetic to sex offenders. Judge Jackson’s rebuttal to his claims, notes that judges have to determine how to sentence defendants consistent with the requirements that Congress has set forward. It is important to note that Senator Hawley has previously confirmed three Supreme Court justices that have given sentences below the recommended minimum but did not press this issue with them. She further explained that she takes these cases very seriously and encourages Congress to make updated laws and clearer guidelines for these cases.

Another issue that came up was her opinion on court-packing to expand the number of Justices on the Supreme Court Bench to which she said, “In my view, judges should not be speaking to political issues and certainly not a nominee for a position on the Supreme Court,” This neutral stance by Judge Jackson reinforced that this issue would not be hers or any judges decision, but the decision of lawmakers.

Later on, the topic of critical race theory came up as Texas Senator Ted Cruz attempted to link Jackson with critical race theory, despite her repeated statements that academic theories “[do not] come up in my work as a judge.” Cruz then brought up blown-up displays of books used at Georgetown Day School, where Jackson serves on the board of trustees, such as Antiracist Baby which he states is “overflowing” with Critical Race Theory, and asked her if thought babies were racist Jackson explains to Senator Cruz that the board of trustees doesn’t control the books that are taught, further citing that “I do not believe that any child should be made to feel as though they are racist, or as though they are not valued, or as though they are less than, that they are victims, that they are oppressors — I don’t believe in any of that.” The book that Cruz claimed taught that babies were racist does not teach this and sales of the book significantly increased after the hearing.

Questions about her stance on gender identity came up when Tennessee Senator Marsha Blackburn asked Judge Jackson to provide the definition of a woman. To which Judge Jackson responded, “I’m not a biologist”. While Judge Jackson’s answer was neutral, Senator Blackburn condemned her response.

On the third day of the Senate hearings, Judge Jackson sat through 10 hours of extensive questions that focused on how she judges her cases, controversial topics, and more questions about previous sentencing decisions.

When asked by Senator Cruz, judge Jackson stated that if confirmed she would recuse herself from the Students for Fair Admissions v. President and Fellows of Harvard College, a case challenging Affirmative Action, since she sits on the Board of Overseers, which would be a conflict of interest.

During Senator Cory Booker’s questioning time, he took a moment to acknowledge that Judge Jackson’s confirmation to the Supreme court would be a historical moment. He also criticized how the type of questions the Republican senators were asking her. He shed a few tears while referencing his mom and other family members stating“ I see my ancestors in yours. …Nobody’s gonna steal that joy.”

On the final day of the confirmation hearings, witnesses were brought in from the American Bar Association and U.S House Representative Joyce Beaty on behalf of Judge Jackson. While Alabama general attorney spoke against Judge Jackson’s confirmation. The day wrapped up with congratulations for Ketanji Brown Jackson and her impressive record.

On April 7, Ketanji Brown Jackson was confirmed by the U.S. Senate on a 53-47 vote, with all Democrats plus Senators Mitt Romeny, Lisa Murkowski, and Susan Collins voting in favor and the remaining Republicans voting against.