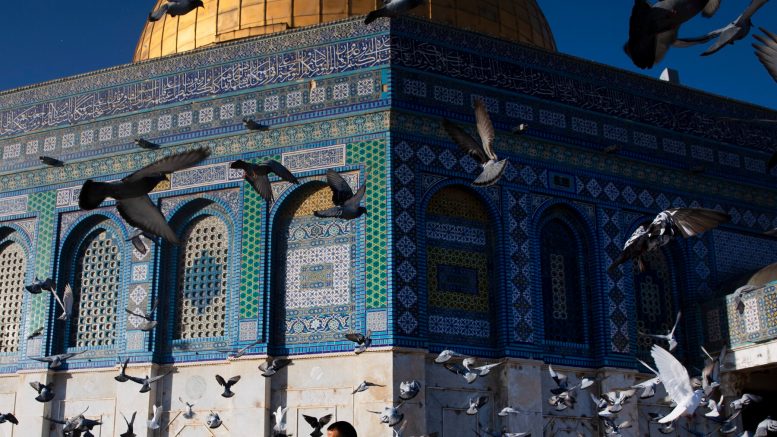 The Dome of the Rock Shrine at the Al-Aqsa Compound || Source: AP News

Ramadan saw an increase in Palestinian-Israeli tension as Israeli security forces conducted raids on Jerusalem’s Al-Aqsa Mosque and fighting in Palestinian territories escalated. This comes as a repeat of last year, when Israeli authorities expelled Palestinian families from their homes in the Sheikh Jarrah neighborhood of East Jerusalem. In 2021, the expulsions were accompanied by an 11-day air assault by Israel on Gaza, which was, ostensibly, the country’s response to rockets fired by the militant group Hamas.

In 2022, on the other hand, Jerusalem-based analyst Mazen Jaabari tells Al-Jazeera, “The escalation may come from different places, including but not necessarily from Jerusalem.” In addition to the Israeli raids of Al-Aqsa, late March and April brought an unprecedented rise in Palestinian attacks in Israel, which killed 14 people as of April 14.  36 Palestinians had been killed by Israeli forces since January, as of April 14.

Many of the Israeli killings have taken place in the occupied West Bank town of Jenin. As Israeli forces conduct raids, arrests, and assassinations, Jenin has experienced a spike in armed Palestinian-Israeli confrontations. The renewed violence has stoked fears of an Israeli invasion of Jenin’s refugee camp, which houses wings of the Fatah faction of the Palestinian Liberation Organization and of the extremist Palestinian Islamic Jihad (PIJ) movement: According to a PIJ spokesman, “Continued aggression on the Jenin camp will lead events to an open and full confrontation soon.”

In response to the escalation at Jenin and Al-Aqsa Mosque, Hamas, the governing authority of the Gaza Strip, mobilized to defend Palestinian territories from Israeli advances.

Al-Aqsa lies in Jerusalem’s Old City alongside Jewish and Christian holy places, such as the Western Wall and the Church of the Holy Sepulchre. Following the UN’s 1948 partition of historic Palestine, these sites are under Muslim, Jewish, and Christian jurisdiction, respectively, though as of 1967, Israel has annexed the broader Old City.

Al-Aqsa is a part of the Haram al-Sharif, or Temple Mount, of East Jerusalem, which is administered by the Jerusalem Islamic Waqf, a Muslim religious organization overseen by the Jordanian government. Israel permitted the waqf to retain authority following its annexation of the rest of East Jerusalem.

As Palestinian-Israeli borders are crossed, Al-Aqsa has become the historically charged nexus of Israel’s push for control and the Palestinian’s struggle to maintain it. While Jordan and the waqf designated Al-Aqsa a place for Muslim prayer only, the Israeli government and a group of Orthodox rabbis exercise control over the holiest site in Judaism, the West Wall; but there is Israeli resistance against Muslim control of Al-Aqsa. Some of this resistance is civilian. For example, the Jewish group Returning to the Mount hopes to eventually secure “full Jewish sovereignty over the Temple Mount” and so encourages members to pretend to be Muslim in order to pray at Al-Aqsa.

On May 4th, however, Israeli state forces stormed the mosque, injuring at least sixteen Palestinians and arresting dozens. Further, though incursions had halted during the last days of Ramadan, upwards of 600 Israeli settlers, or Israelis who occupy officially Palestinian land, entered the mosque compound with Israeli police protection.

Thursday, Hamas said via statement that such incursions are “a direct provocation, threatening a comprehensive explosion, for which the occupation government bears full responsibility.”

The fighting at Al-Aqsa comes as Israel prepares to celebrate 74 years of statehood on May 15. The same day, Palestinians will remember the Nakba, or “catastrophe,” when 750,000 Palestinians were forced from their home in historic Palestine.