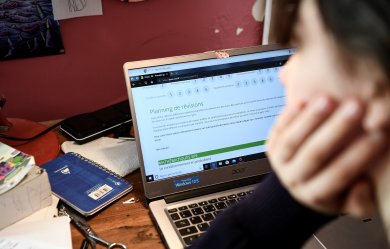 For the past couple of weeks, there has been a lot of discussion about a potential policy prohibiting asynchronous exams at IMSA. It is currently unclear if such a policy exists and what exactly that policy entails. The Principal’s Office declined the invitation to participate in an interview with The Acronym regarding the potential policy, though they did meet with StudCo reps to discuss the matter. Some faculty and students weighed in on the situation, answering questions from The Acronym.

Students have received little information about this policy, and as such have different impressions about the possibility of banning asynchronous testing. Their understanding of the reasoning behind the policy range from cutting down students’ workload outside of class to preventing academic dishonesty. Rachel Selvaraj (‘22) said “Honestly, I feel like not much has been disclosed about this policy. A lot of it feels pretty secretive and overall, unclear.”

Math faculty member Dr. Patrick Davis said there was an original policy that completely stopped asynchronous testing, but it was revised a few days later. He stated that his “current understanding is that we are allowed to now resume giving asynchronous assessments, however, the Principal’s Office has asked us to make sure that there’s a clear reason and justification for that,” such as a summative or unit assessment.

Student Council also provided some insight into the situation, as they met with the Principal’s Office to discuss the policy. Student Council President Eric Pan (‘21) said “Based on our meeting… there actually was no policy that was passed… Students were told by teachers through word of mouth that asynchronous testing wouldn’t be allowed… From my understanding, that whole situation was a misunderstanding. The Principal’s Office never created a policy stating that there was no asynchronous testing.”

The implementation of a policy (or at least the possibility of a policy) against asynchronous exams greatly affected some teachers, as they had to adjust their teaching plan. Dr. Davis said “The initial change in policy to stop asynchronous assessments immediately impacted my AB Calculus class… We had scheduled for an exam to be released on Friday… the policy to stop asynchronous testing was issued on Wednesday early evening… We had to reshuffle that… to the following week so that we could accomplish it synchronously. I had to cut it down and make sure it would be appropriate for a synchronous session.” However, “For my understanding of the updated policy… it’s probably not going to have a huge impact on the way that I want to assess now… The types of things that I would want to give asynchronously… we’re going to be permitted to do again. So going forward, I don’t think it’s going to have a huge impact anymore.”

The policy raised several concerns for students. School Counselor Takeisha Rheams said that she “heard from several students… they’re stressed over academics and having a lot of sadness… over all of the work that they were having to do at home.” Further, she stated “I feel that [the impact of asynchronous exams on students’ mental health] depends on the student… I feel like maybe for some students it can be beneficial, but I can also see how it can cause more stress for other students, so I think it really just depends on the student.”

The following illustration summarizes the pros and cons of asynchronous and synchronous exams from the perspective of students who were interviewed for this article. 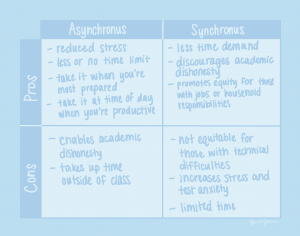 Akanksha Garg (‘21) stated, “Taking a test asynchronously did help me a lot academically and emotionally. I was able to take more time to think about each of the questions and write detailed responses and check my work when I was finished, which I don’t think I would have been able to do otherwise.”

It seems that the discussions surrounding a policy against asynchronous exams may still be in progress. Eric Pan said that “According to [Dr. Akwaji-Anderson] … they’re working with faculty to create the best practices for teaching in an online environment, so everything is still being worked on.” Dr. Davis also said that “Everybody at school is looking for the best ways and the optimal ways to do things, and everybody is looking for… what would be best for the students… So the Principal’s Office and us teachers are always trying to figure out what would work best for you guys.” Additionally, Dr. Davis said that “We as teachers really appreciate all of your flexibility as we figure out the optimal way to do this remotely… It is a learning process for us as much as it is a learning process for you.”

“At this moment… the best thing that Student Council can do… is just take as much student input as possible and make sure that the Principal’s Office has the information to make decisions that are beneficial for the student body,” said Eric Pan. If you have any concerns or questions regarding asynchronous exams, please direct them to Student Council’s Universal Submission Box.

How to Reduce Zoom Fatigue