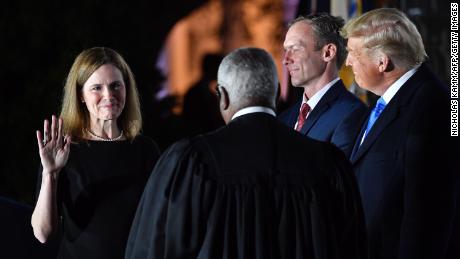 Judge Amy Coney Barrett being taking the oath to be sworn in as the new Supreme Court Justice || cnn.com

With the passing of Supreme Court Justice Ruth Bader Ginsburg, a vacancy opened in the SCOTUS. On September 26th, President Trump nominated Amy Coney Barrett to be the newest member of the Supreme Court. But with this nomination also came multiple controversies and political issues. Justice Ginsburg was known for her famous decisions on divisive rulings like Roe v. Wade, where she struck down the ruling to uphold the court’s decision from 1973. Ruth Bader Ginsburg held a different position in the Supreme Court as even though she was liberal by word, many of her rulings held conservative ideals. To replace someone of such a complicated political standing has proven to be a true challenge to the composition of the Supreme Court.

The confirmation trials for the new justice began on October 12th with Senate Judiciary Chairman Lindsey Graham commencing the hearings. On the first day of the hearings, Democratic and Republican senators shared opening remarks about the nominee, and her past opinions on issues like the Affordable Care Act and Roe v. Wade, and how her views differ with former Justice Ginsburg. Democratic senators slammed the Republicans for pushing to hold the confirmation hearing in these unprecedented times. Another big issue throughout the hearings was exposure to COVID-19 as many Republican senators refused to wear masks during their speaking time. People were also heavily focused on Judge Barrett’s devout Catholicism, with many Democratic senators stating how her religion would interfere with her rulings.

The second day of trials was the first round of questioning between the senators and Judge Barrett. Barrett constantly reiterated that she would be basing her decisions only on what is in front of her and does not have an agenda for cases at the moment. She said, “I have no mission and no agenda. Judges don’t have campaign promises.” Democratic senators Cory Booker and Mazie Hirono pressured her with questions regarding her stance on Obergefell v. Hodges, and criticized her usage of the term “sexual preference,” calling it “offensive and outdated.” The night also included many questions on her personal life and her past, including those about her adopted children and a mock debate in 2006 where she voted against Obamacare. Throughout the night, she also reinforced that she was not nominated to strike down the Affordable Care Act, contrary to Trump’s original wish.

Monday night, the Senate held their final votes towards the confirmation, with a 52-48 split voting for Judge Barrett. Republican Senator Susan Collins from Maine was the only GOP senator to vote with the Democrats against the confirmation of the nominee, due to concerns that it is too close to the election day to consider a nominee. With Amy Coney Barret’s confirmation, there is now a 6-3 conservative majority in the court. In her speech after being sworn in by Justice Clarence Thomas, Barrett expressed her gratitude for the position and what the American people would expect out of her: “My fellow Americans — even though we judges don’t face elections. We still work for you. It is your Constitution that establishes the rule of law and the judicial independence that is so central to it. The oath that I have solemnly taken tonight means at its core that I will do my job without any fear or favor and that I will do so independently of both the political branches and of my own preferences. I love the Constitution and the democratic Republic that it establishes and I will devote myself to preserving it.”