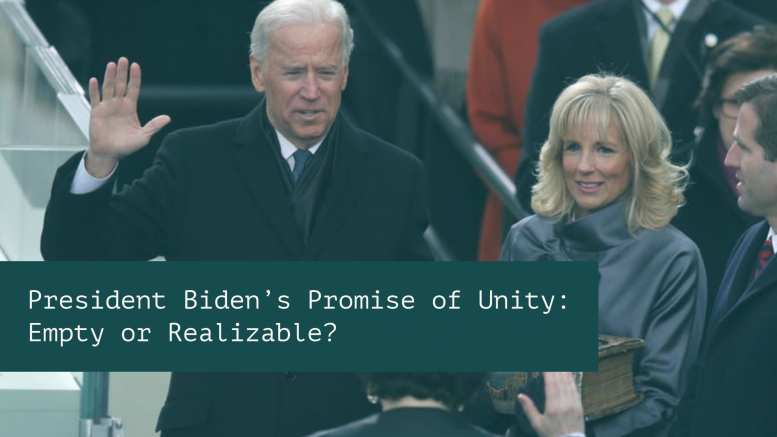 “We can join forces, stop the shouting and lower the temperature. For without unity there is no peace, only bitterness and fury. No progress, only exhausting outrage. No nation, only a state of chaos. This is our historic moment of crisis and challenge, and unity is the path forward.”

In a hyper-polarized political arena, Biden’s promise of unity, “the most elusive of things in a democracy,” may seem a little too idealistic. After all, the divide in American politics relative to other nations is quite stark as revealed by a Pew Research Study:

Over the summer, 76% of Republicans (including independents who lean to the party) felt the U.S. had done a good job dealing with the coronavirus outbreak, compared with just 29% of those who do not identify with the Republican Party. This 47 percentage point gap was the largest gap found between those who support the governing party and those who do not across 14 nations surveyed. Moreover, 77% of Americans said the country was now more divided than before the outbreak, as compared with a median of 47% in the 13 other nations surveyed.

So while there certainly is potential for bipartisan agreements, it seems like an impossible task for one president to try and fix all the internal division that has been metastasizing for years. It’s a sentiment that President Biden seemed to share:

I know speaking of unity can sound to some like a foolish fantasy these days. I know the forces that divide us are deep and they are real. But I also know they are not new. Our history has been a constant struggle between the American ideal that we all are created equal and the harsh, ugly reality that racism, nativism, fear, demonization have long torn us apart.

Though unity is more about actions than words and Joe Biden has certainly been active. With a slew of executive orders within hours of being sworn in, Biden has already received criticism from the likes of the New York Times saying that “he has offered no examples of Republican priorities he was willing to adopt in the interest of bipartisan cooperation nor described what compromises would be acceptable to win congressional approval of his initiatives.”

Megyn Kelly, podcaster and former Fox News host, sees unity as synonymous to selling out, dismissing Biden’s promises of unity as rhetoric and saying, “We’re not gonna unite. It’s all nonsense.” Kelly and many of her conservative supporters claimed Biden’s first actions as president were among the most divisive moves he could make because they signified that he does not sincerely want to heal the nation’s polarization. Within days of his presidency, the press was demanding to know when Biden would start promoting unity and propitiating the GOP by pushing “Republican priorities.” Where are the questions on which “Democratic priorities” the GOP is willing to adopt in the name of unity?

Unity isn’t a one-sided issue; however, it seems the entire burden of “bipartisanship” is being placed on Democrats. For example, an overwhelming majority of Americans support pandemic financial relief, but Republican senators steadfastly oppose it. Now because the GOP opposes them, any policy push by Biden is divisive even if it supports the majority’s wants. Biden’s inaugural address specifically called on Americans to join together against the “common foes” of anger, resentment, hatred, extremism, lawlessness, violence, disease, joblessness, and hopelessness. These are universal desires, which aren’t limited to certain policies or parties. He never promised to abandon his agenda to appease the GOP for unity’s sake and he shouldn’t have to.

Joe Biden doesn’t have to choose between unity and change because “unity” doesn’t have to be about legislation and governance. Unity can and should be about having a President of the United States who doesn’t call members of the opposing party “baby killers” and “thieves” or demand that they are jailed. It’s about civility, integrity, and respect in order to have intelligent public discourse that’s more likely to be productive. It has never meant surrendering the Democratic agenda to appease the GOP or abandoning accountability for the treacherous actions of a previous president.

1 Comment on "President Biden’s Promise of Unity: Empty or Realizable?"