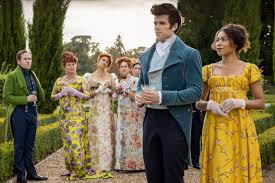 As we continue to adjust to second semester, it’s almost impossible not to reminisce about binging TV shows over winter break. Being able to start an episode without the lurking fear of an upcoming due date is incomparable. Here’s a recap of some recently popular television shows that many were sure to watch over the break.

A classic period drama, Bridgerton focuses on the Bridgerton family. Each episode is narrated by Julie Andrews, who plays an anonymous columnist. The narration follows eight children of a widow as they navigate through life, which happens to be full of drama and gossip. Receiving both praise and criticism, the show decided to make the characters racially integrated, drawing on Queen Charlotte’s possible African ancestry. Bridgerton was created by Chris Van Dusen, and stars Rege-Jean Page, Phoebe Dynevor, and more. Overall, the show received general approval from critics. Richard Roeper from the Chicago Sun-Times named the show “an unqualified triumph”.

After finishing the 16th of The Bachelorette, the widely popular franchise released its 25th season of The Bachelor, starring Bachelor Matt James. This reality show focuses on 32 women as they fight for Matt’s heart. A variety of one-on-ones, group dates, and drama make The Bachelor truly unique. Eventually, the winner will likely go home with Matt as husband and wife. Matt also happens to be the first black Bachelor, making history in the franchise. New episodes are released every Monday with five already aired. Notable contestants include Abigail Heringer, Bri Springs, Rachael Kirkconnell, and more.

Streaming on Disney+, WandaVision is a miniseries based on the Marvel Cinematic Universe’s characters, Wanda Maximoff (Scarlet Witch) and Vision. The plot is meant to take place after Avengers: Endgame and follows the couple through various television tropes. Moreover, Episode Five features a twist ending, leaving viewers wondering what this may mean to the MCU. WandaVision has gained critical attention for its uniqueness and conspiring plot. From The Independent, Louis Chilton wrote, “It’s the most purely intriguing thing the MCU has ever made”. The show was created by Jac Schaeffer and stars Elizabeth Olsen and Paul Bettany.

This seemingly light-hearted dance series takes a dark turn of mystery and lies. Tiny Pretty Things revolves around the Archer School of Ballet after one of its students is pushed off the roof of a building by an anonymous attacker. The show is based on the novel written by Sona Charaipotra and Dhonielle Clayton. What’s unique about this show is that all of the featured dancing is performed by the actors themselves, which makes it feel more authentic. Tiny Pretty Things was created by Michael MacLennan and its cast includes Casimere Jollette, Brennan Clost, and Barton Cowperthwaite. The show, however, did receive rather mixed reviews. Rotten Tomatoes stated, “Tiny Pretty Things has some solid moves, but an over-reliance on empty scandal over emotional substance make for unsatisfying viewing”.

Which K-Drama Should You Watch?

Be the first to comment on "Post-Winter Break TV Roundup"